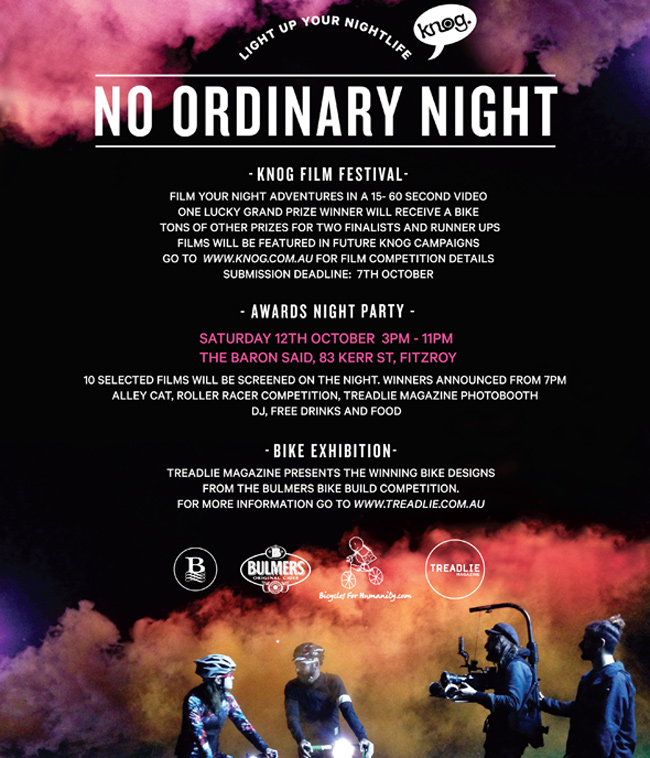 We’re due for a party! Join us and our friends at KNOG and The Baron Said Saturday October 12th, it promises to be No Ordinary Night!

We’re bringing the Treadlie Photo Booth along, our favourite bike builder the Velocipede Improbulator will be there, MDMA are running an Alley Cat, the KNOG Film Festival Awards are on,  DJs Alexandra and Sanso will be providing the tunes, there’ll be bike maintenance from Good Cycles and our friends from Bicycles for Humanity are coming along as well.

KNOG will be screening ten finalists in the KNOG Film Festival followed by an awards ceremony at which winners will be announced.  You’ll also be able to see the winning bikes of the Bulmers Bike Build competition.

The guys at MDMA are running the Northside Nonsense Alley Cat 6pm to register, start at 6:30

The KNOG Film Festival Awards Ceremony  kicks off at 7pm

DJs Alexandra and Sanso will be flexing from 7pm onwards

You can keep up to date with everything thats happening on the night over here.