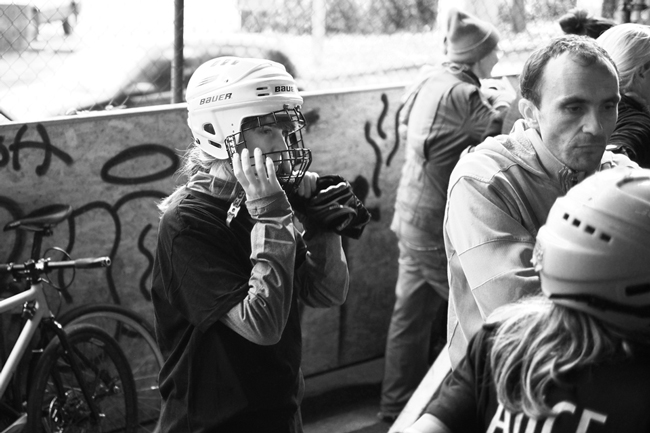 I wake up slowly, groggily as always. I am lying on a couch in a strange apartment, half covered by my sleeping bag, with gentle light shining on my face from the unshuttered window. I wonder briefly where I am before I remember that I am in Geneva, Switzerland. I am here to play bike polo at Hell’s Belles Volume IV, the first all-female tournament I have ever attended.

Hell’s Belles was first held in London in 2011 and was conceived to encourage the growth of women in bike polo – originally two out of the three players in a team had to identify as female. That first year there were 20 teams, most of them with a male player. Now in its fourth year all 16 teams are exclusively female, and the level of competition is both high and fierce.

The thump of lorry wheels and suspension systems booms down from the concrete highway above the court while car and motorbike engines growl at us from either side. Sometimes the noise makes it hard to have a conversation on the sidelines, let alone shout at your teammates when playing. To quell my nerves I sip one of the beers from the slab I bought on the way to the court.

In Melbourne, despite having six or so regular female players, it is still pretty normal for me to be the only woman at polo. Looking around at Hell’s Belles it is difficult for me to wrap my head around the fact that there are at least 47 other women here who play polo. Some of them have been playing for four times as long as me, some of them for a quarter of the time. We are a diverse bunch, we speak different languages and come from different corners of the globe, but here we all are, underneath a highway in Geneva, riding bikes and trying to hit a little plastic ball into a goal while hundreds of people around the world watch us on the live video feed.

My team, Chicks With Sticks, makes it into the top eight and is graciously knocked out of the single elimination round by Lil’ Hit, who then face Sisters in the semi-final, eventually being defeated by a goal scored ten minutes into overtime. Sisters go on to face Fluffy Riot in the final, winning decisively 3-1.