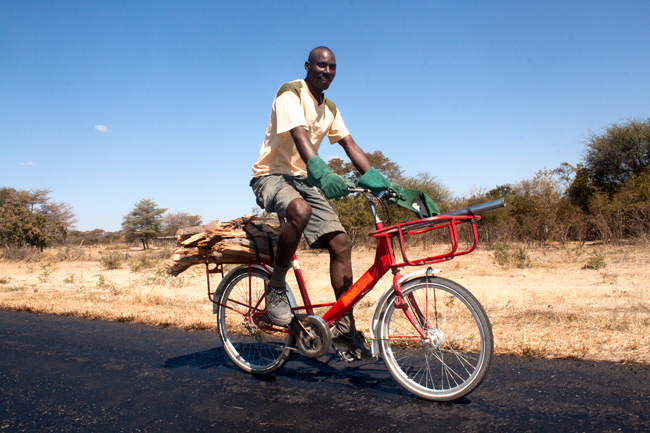 You might have read about Bicycles for Humanity in one of the earlier issues of Treadlie Magazine. Or maybe you’ve donated a bike to them or been part of their fundraising? But did you know that Bikes for Humanity is just one small chapter in a much bigger story?

The story began back in 2004, when Australian Michael Linke connected with TKMOAMS, an HIV/AIDS support organisation in Oshakati, Namibia. Inspired by the work of outreach volunteers, who often walk long distances to visit their clients to provide basic support, medication and counselling, Linke felt compelled to assist when TKMOAMS requested bicycles to improve their work.

After months of fundraising with friends and overseas charities, he returned to Namibia in 2005 and founded a non-profit organisation, the Bicycling Empowerment Network Namibia, or BEN Namibia, as it is better known.

The organisation delivered thousands of bicycles, supplied by overseas charity partners, like Bicycles for Humanity, to healthcare workers, and indeed the impact on their work was impressive. But giving bikes away soon raised questions of sustainability, and at the same time, BEN Namibia saw that many of the volunteers, and the organisations supporting them, faced extreme financial hardship.

Together with its partners, BEN Namibia developed a new social enterprise model, with bicycle sales and servicing at the core. Working with local organisations, who select trainees and a project site, BEN Namibia delivers a shipping container filled with around 350 second-hand bicycles, and delivers it to a town or village. Trainees learn how to service and repair bicycles, as well as business skills. They then give some bikes to volunteers or school children, and begin their business by selling bicycles. The funds are used to pay the mechanics’ salaries and cover the costs of supplying more bicycles and spare parts. After the initial container load of bicycles, the shops cover all their ongoing expenses from their own income, ensuring that the programme is sustainable.

Today, there are 32 of BEN Namibia’s partner shops throughout the country, and they require a constant flow of bicycles into the country to keep them in stock. “We are importing at least one container a month, sometimes two” explains Paulina Endjala, BEN Namibia’s distribution and training coordinator. “in total, it’s between 5,000 to 6,000 bicycles every year”. BEN Namibia recently exceeded a total of 35,000 bicycles imported into Namibia.

The numbers are starting to bring about noticeable changes in the communities where the shops are located. Locals observe that in Opuwo, just five years ago, there were one or two bicycles to be seen rolling down the main street. Now the town is busy with bicycle traffic.

The shops are much more than just a place to buy bicycles. Local partner organisations ensure that a share of the profits is used to fund important causes at the community level. For most shops, this means feeding, clothing and supporting orphans and vulnerable children. The Katima Mulilo shop, for example, has helped register 175 orphans and vulnerable children, and with support from Catholic AIDS Action, provides them with balanced meals twice a week. The children’s weight and other health indicators are monitored every month, and the data shared with the Ministry of Health and Social Services, which identifies children with critical problems. Since they began, they have seen a drop in malnutrition and an improvement in academic performance among the children.

The King’s Daughters Bicycle Shop in Windhoek also ploughs back its profits in supporting former commercial sex workers with basic necessities and vocational training to help them transition into mainstream employment. Its vital services have been recognized internationally, with director Esme Kisting receiving an award from Hilary Clinton at a ceremony in the Whitehouse.

In the village of Okafitu in Ombalantu, the first shop established, in 2006, not only supports orphans with food and school uniforms, but has created a franchise outlet in Outapi, 18 km away, and has created five new jobs by using its profits to start a brick making business. It has opened a new market for bricks deep in rural Ombalantu, where previously it was difficult and expensive to buy any building materials. Like many of BEN Namibia’s partner shops, Okafitu Bikes also retails solar energy products supplied by local non-profit, Elephant Energy.

There are dozens of other success stories from BEN Namibia’s network of partner shops. While Namibia is getting close to being full up with bicycle outlets, there remains plenty of work to do. “We still plan to establish a few more shops in the coming years,” says Managing Director, Michael Linke, “But we want to keep supporting our network. Like any business with multiple retail outlets, we have some that perform better than others, and this is normal considering that most of the workers have never managed a business before. Things like field visits and refresher training are very important in this context”.

BEN Namibia’s next shop will be in the San settlement of Chetto, an extremely disadvantaged community in the Zambezi region with few economic opportunities. “In Chetto, you can either dig for Devil’s Claw, or you go hungry,” says Linke. “A bike shop there won’t solve all the social problems, but it’s a first step towards diversifying the local economy, and towards empowering local people to address their most pressing social needs”.

BEN Namibia is also helping to adapt its programme in other countries. There are three bicycle shops in Zambia, the first two have just been delivered through a health project in Madagascar, and another is being established in the Kibera slum in Nairobi. Much of BEN Namibia’s work in the coming years looks set to be supporting similar African organisations to establish their own bicycle shop networks.

BEN Namibia relies on financial support from individuals and corporate partners to deliver its programmes. If you would like to make a donation, visit bennamibia.org/donate, or email [email protected].