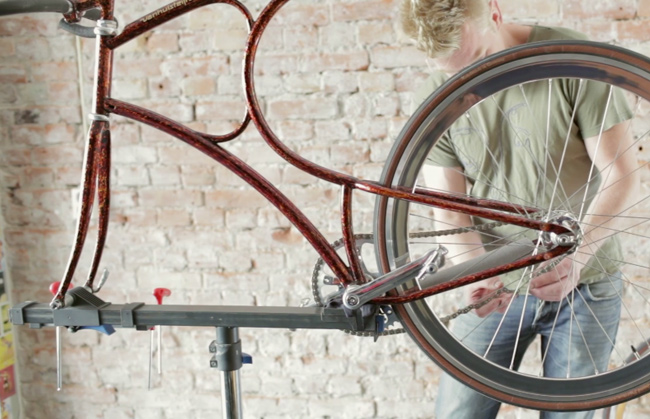 We first met Herman Vanhulsteijn, in his Arnhem workshop, back in 2011. His head-turning bicycles, then dubbed ‘Cyclone’ had attracted a small following, impressed first by the aesthetic but then by the ride. Handcrafted from steel, Vanhulsteijn bicycles have continued to grow and develop.

Herman van Hulsteijn’s background as a designer is again apparent in this latest incarnation of the Vanhulsteijn bicycle, a collaboration with Sotheby’s incorporating the traditional Japanese practice of urushi.

Urushi is a natural plastic, made of the sap of the urushi or lacquer tree (rhus vernicifera). The sap of urushi tree contains a resin (urushiol) which, when exposed to moisture and air, polymerizes and becomes a very hard, durable, plastic-like substance. Applying the lacquer is long and labour intensive, taking on average 6 months to finish. Depending on the kind of lacquer a single layer can take anything from 2 hours up to 3 months to dry.

The style of Urushi used here is Tsugaru Nuri, which implements several layers of gold leaf to achieve a stunning, rich effect contrasting beautifully with the bicycles components. The layer of precious metal glows beneath the lacquer , creating such depth that the pattern almost appears to be three-dimensional. Additionally, the nature of the urushi process is that each bike will be truly unique.
Beside the frame, Herman van Hulsteijn also designed components such as  the elegantly shaped brake levers and pedals. The shape of individual components were carefully polished by hand to highlight their shape. The saddle and handle-bar tape are finished with the skin of a ray. And finally, the bicycle is finished with the Vanhulsteijn logo and number in the Maki-e technique, gold dust of various grain sizes sprinkled in urushi lacquer.

Herman van Hulsteijn’s urushi bicycle is a beautiful combination of contemporary design and traditional craft. Van Hulsteijn and Sothebys will produce a limited edition of nine bicycles, each tailor-made to the customer. If you’re in the market for something this special, then drop herman a line at [email protected]

If you’d like to read more about Vanhulsteijn bicycles then check out Issue 3 of Treadlie Magazine.