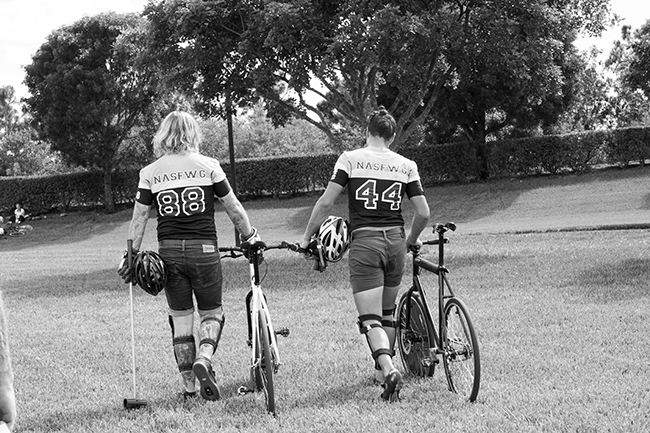 Day three, the finals, was the longest, most energy packed, nail biting day we’ve had here at the Worlds. There were 14 hours of hard polo played backed to back in 36 degree heat.
NASFWG played two games in the first half of the day before getting knocked out by last years champs, which really, is a pretty good way to go. The guys played amazingly and were greeted by a stream of cheering Aussies as soon as the last whistle blew. Any annoyances and tensions from the day before disapeared as the guys all put in a really solid effort.

Melbourne anchor lost out early in the day but played really well. At least after those knockouts we could all sit back and enjoy some A grade polo together.
A massive rain storm hit early evening, shutting down the courts as it was too dangerous to play. It granted some much needed relief from the heat and everyone went a bit mad. There was even some impromptu break dancing mascots and two streakers.

The games following the rain had everyone wired and hanging off the fence. The games got a bit more dirty as the day went on and the pressure was really hitting. A few near punch ups happened but then got hugged out which was pretty nice to see. There were a few egos flying around the courts last night but all in all it was all pretty good display of sportsmanship from the top teams.

The crowds were epic and some of the chants were deafening. The ‘Eddisons’ from Germany, a clear crowd favourite took out 4th place. ‘The Assassins’ from the states took out 3rd, Le Coq Sportif sponsored ‘Call me Daddy’ grabbed second place and First went to ‘The Beavers’ (USA).
Heads are a little sore the next day and lots have lost their voices from the chants. The final day of the weekend ends with a Ladies Bench Tournament, a pretty great finish to an amazing ‘Worlds’. Thanks Florida!
Today’s Team Profile: Woolley Bullies