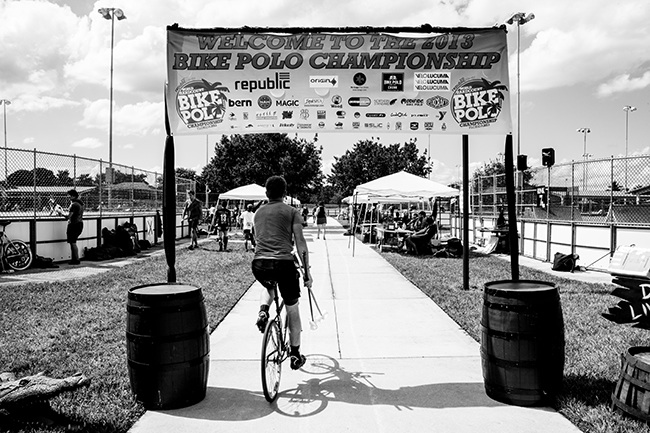 The World Hardcourt Bike Polo Championships are  underway, held this year in Weston Regional Park, Florida. Our correspondent, Stephanie Simcox, is in Florida and going to be reporting in each day with all the highlights of the previous day’s play and some fantastic photos. We’ll be especially keen to see how the Australian teams go.

All the action starts with a joust, followed by 12mins of fast play and a brilliant display of riding skills. There are 64 teams competing from all around the world.

There are three contact rules: body on bike, bike on bike and mallet on mallet.

It’s sweltering in Weston but that didn’t stop hordes of people spilling into Weston Regional Park yesterday for the Wild Card event at the World Hardcourt Polo Championships. The Wild Card consists of thirty-six teams battling it out On abandoned roller-hockey rinks to secure a spot in the main competition.  It was a long humid day of back-to-back games, some teams hardly getting a breather between matches.  There were a few disappointments but mainly just hot hard play.

There are four teams from Australia who already have a place in the main tournament: Not A Single Fuck Was Given, (NASFWG), sponsored by Le Coq Sportif, Triple Dutch Rudders, Melbourne Anchor and The Wooly Bullies.  The lads and ladies from Australia spent the day preparing their bikes and building mallets. There is a bit of nervous energy in the air and spirits are high. The Australian tems are keepinge ach other’s spirits high and generally enjoying the day in the lead up to the main event.

You can watch all the action at the Worlds live on bikepolo.tv and catch up with scores and competition results here. We’ll be posting a wrap up with exclusive photos from Steph each day at Treadlie online. Steph is in Florida courtesy of Le Coq Sportif