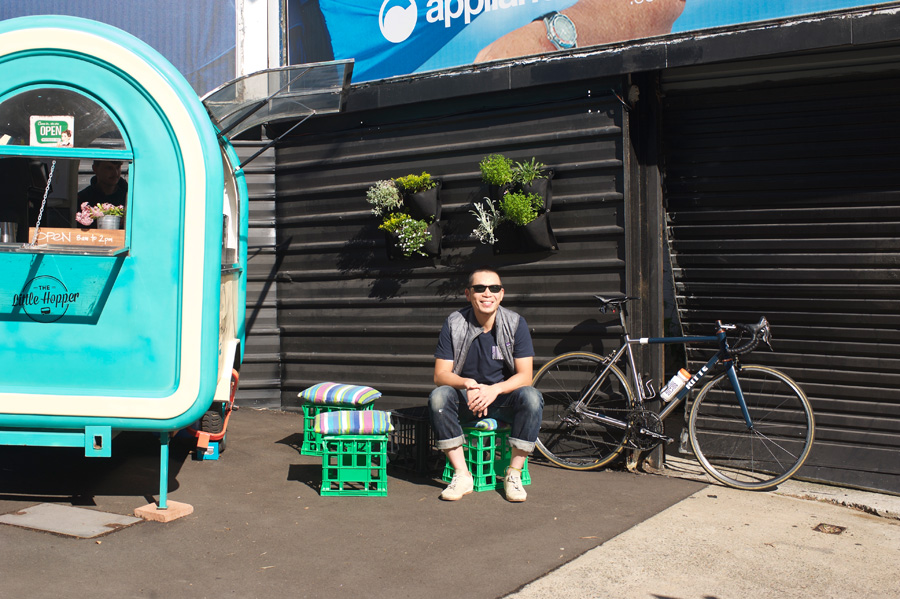 Hong Kong’s loss was our gain when the talented graphic artist chose Sydney as his home.

Graphic design is a broad term. Essentially, it refers to the process of organising typography, symbols, and imagery to communicate a message. It touches diverse fields such as magazine layout, brand identity, posters and packaging. It’s an art, but graphic designers also need to be technically aware of printing processes, paper and online applications.

It’s a field that Wing Lau has a great talent for but he shares an equal amount of passion for it with his bikes and cycling.

Wing has just returned from a 977 km tour of Japan with a dozen-strong band of friends who call themselves the Slowpokes. Months in the planning, Wing utilised his graphic design skills to create an identity for the group, which was applied to jerseys, drink bottles, caps, stickers and a website.

Each of the guys took photographs and recorded them on Instagram with the hashtag #slowpokesdayout. As well as this, each rider was given a disposable film camera, which are still readily available in Japan, and those images will have been presented, by the time of publishing, in an exhibition at Sydney’s Rapha Cycle Club, along with mementos and souvenirs from the trip.

Wing was born and raised in Hong Kong and remembers his first bike as being the ubiquitous BMX that everyone had, which carried them from yard to yard and was the primary mode of transport for all the kids in the suburb.

After high school, he had the choice of moving to London or Sydney, both having similar travel costs, and chose Sydney because the university semester dates meant he would start studying his course in graphic design sooner.

He’s lived in Sydney ever since and his career has flourished. Wing’s admiration for typography and the way words and images fit together has earned him an award list that dates back to 2007, the most notable being a Judges Choice Award in 2014 from the New York Type Directors Club, conferred by master typographer Paul Sych.

Posters form a specialist category in graphic design and Wing has produced exceptional examples, most notably for Sydney’s kind of — gallery.

So what bikes does he ride? He has a penchant for those venerable Australian frame builders, the likes of Jim Bundy, Ken Evans and Kerry Hopkins.

Hanging on his wall is a well-ridden Hopkins track bike with aerofoils behind the head tube and bottom bracket, which apparently used to belong to Sean Eadie – 2002 Sprint World Champion. It’s a beefed-up bike for a big bloke: Eadie, and his exceptionally prolific beard, was known around the track as Captain Haddock.

Last year, Wing commissioned Jim Bundy and his son Peter to build him a road bike frame from oversized Columbus Spirit tubes with stainless Llewellyn lugs for both the frame and stem.

It’s Wing’s pride and joy, assembled with Campagnolo’s superb Super Record drivetrain and finely machined brakes by ee Cycleworks. Peter built the wheels himself, hearkening back to that era when the frame builder was a one-stop shop.

Now that the Slowpokes tour is over, Wing is enjoying riding around more familiar routes, but he’s already cooking up new projects and pencilling out ideas for design briefs. It’s difficult to say what he’ll reveal next, but he’ll throw himself into it with an energy level of 110% given his personal motto is “Wing it ‘till you sing it”.