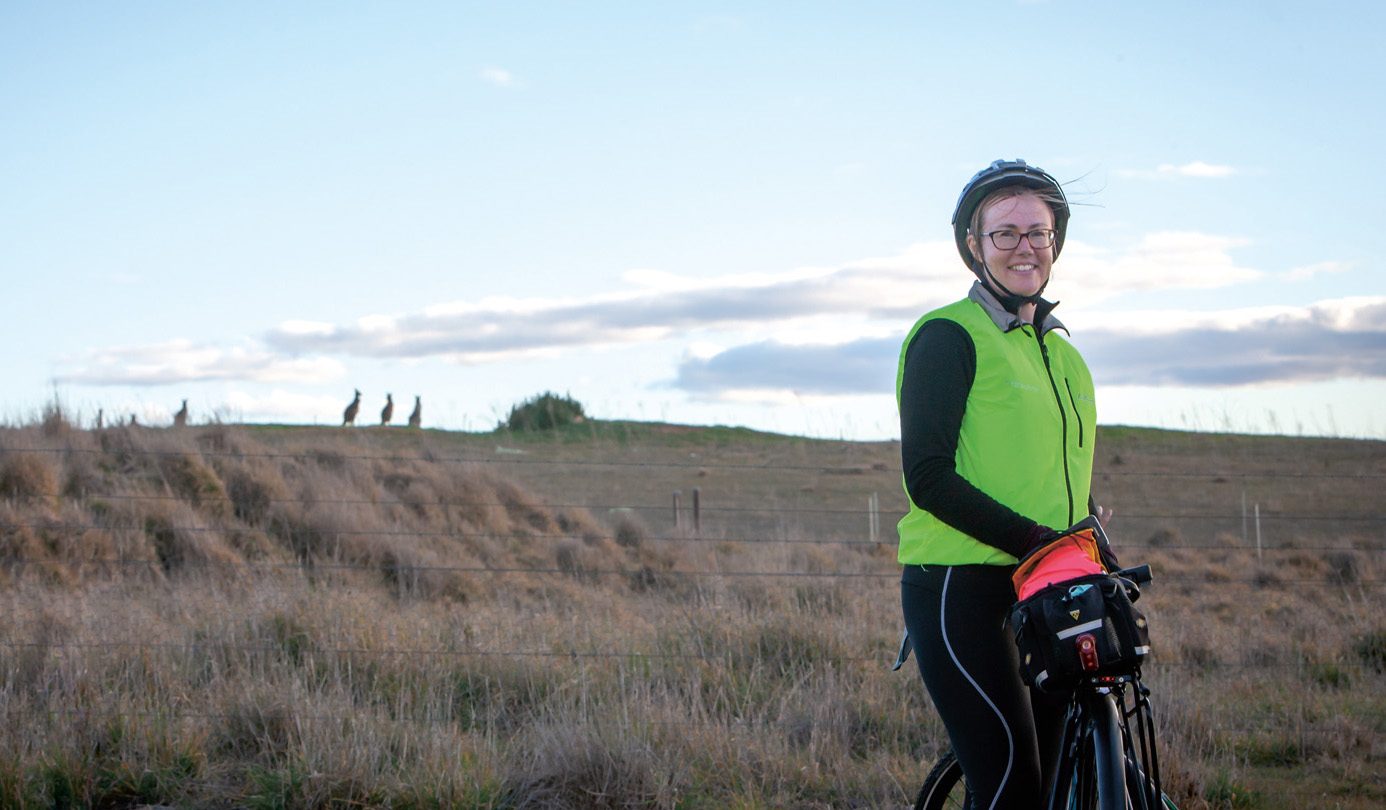 Sarah Maddock quite literally follows in the footsteps of her namesake, a notable figure in cycling history.

It’s something we’ve all tried at least once – plugging our name into Google to see who shares our moniker. But for Adelaide council worker Sarah Maddock, that tiny act of egosurfing led to a big adventure.

Back in the early 2000s, Sarah Maddock discovered that she shared a name with a notable woman from Australia’s cycling history. Reading through her namesake’s entry on the Australian Dictionary of Biography website, Sarah discovered an extraordinary woman of firsts – including being the first woman to cycle from Sydney to Melbourne.

The original Sarah Maddock took up the bicycle in 1893, when women’s cycling was still quite taboo. She accompanied her husband, Ernest Alfred Maddock, on a 486-kilometre ride from Sydney to Bega only a few months later, earning the honour of being the first Australian woman to complete a long-distance ride. A year later, she broke her own record with the pair’s ride from Sydney to Melbourne. The Penny Farthing had given way to the safety bike, and Maddock “rode a 30-pound (14-kilogram) Conqueror safety machine with dropped frame, gearbox and pneumatic tyres”, according to her online biography.

Adventuress she may have been, but Sarah Maddock was also known for being graceful and ladylike at all times. In her column for women’s cyclists that she wrote for the Cycling Gazette, she advocated for riding in skirts and a corset. However, the modern-day Sarah Maddock says this was just for show – she would ride through the bush in black satin bloomers with her skirt draped over the handle, only putting it on before riding into a town.

“Different newspapers along the way covered their stops, and they would say things like, ‘Sarah was as plucky as if she’d just left the drawing room’,” says Sarah. “I think because no woman had done these kind of distances before, they didn’t think women were made out to do this kind of thing.”

After discovering how influential her namesake had been in inspiring other women to take up cycling (she founded two cycling clubs for women in Sydney), Sarah of today was of course curious about retracing the original’s tracks from Sydney to Melbourne. She started making plans in earnest in 2016 while recovering from an ankle sprain, but her plan to do the tour in 2018 with a friend was skittled just days before she was due to set off, when she came off her bike and tore an artery in her neck.

Plans cancelled and her confidence somewhat shaken, Sarah started thinking about doing the ride with a bit more support. Enter Denise and Mark Arundel from Mulga Bicycle Tours. When Sarah contacted them to pick their brains about cycling across Australia, they put forward the idea of creating a fully supported tour to coincide with the 125th anniversary of the historic ride.

Everything finally started clicking into place. Sydney Mayor, Clover Moore and some of the original Sarah’s descendants gathered at Sydney Town Hall to recreate a historic photograph and launch the tour. Riding around one hundred kilometres a day, the tour took the group through Goulburn, Cootamundra, Wagga Wagga, Albury-Wodonga, Beechworth, Mansfield, Yea and finally to Melbourne.

The route differed from the original in order to avoid the highways. Instead, the tour took advantage of rail trails. “While it was a different route, what I enjoyed about it was going back to the bush, which would have been their experience,” says Sarah.

While 1894’s Ernest and Sarah battled a strong headwind throughout their journey, had to outride a bull and were turned away from all the hotels in Marulan because the proprietors thought they were with the travelling circus (“they weren’t known for paying their bills”), the group’s biggest problem was swooping magpies, with one older rider losing a hearing aid. They also had some funny looks from the locals.

“The cows were fascinated,” says Sarah. “They would come over and just stare.”

Sarah is working on a book about her namesake and preparing to follow in her tracks once again with a ride from Sydney to Brisbane, which Sarah and Ernest completed in 1895.

There was one other record Sarah would have liked to recreate, but unfortunately it wasn’t to be. “She didn’t get a single puncture the whole way,” she says. “I was very close to matching that, but I did get one.”