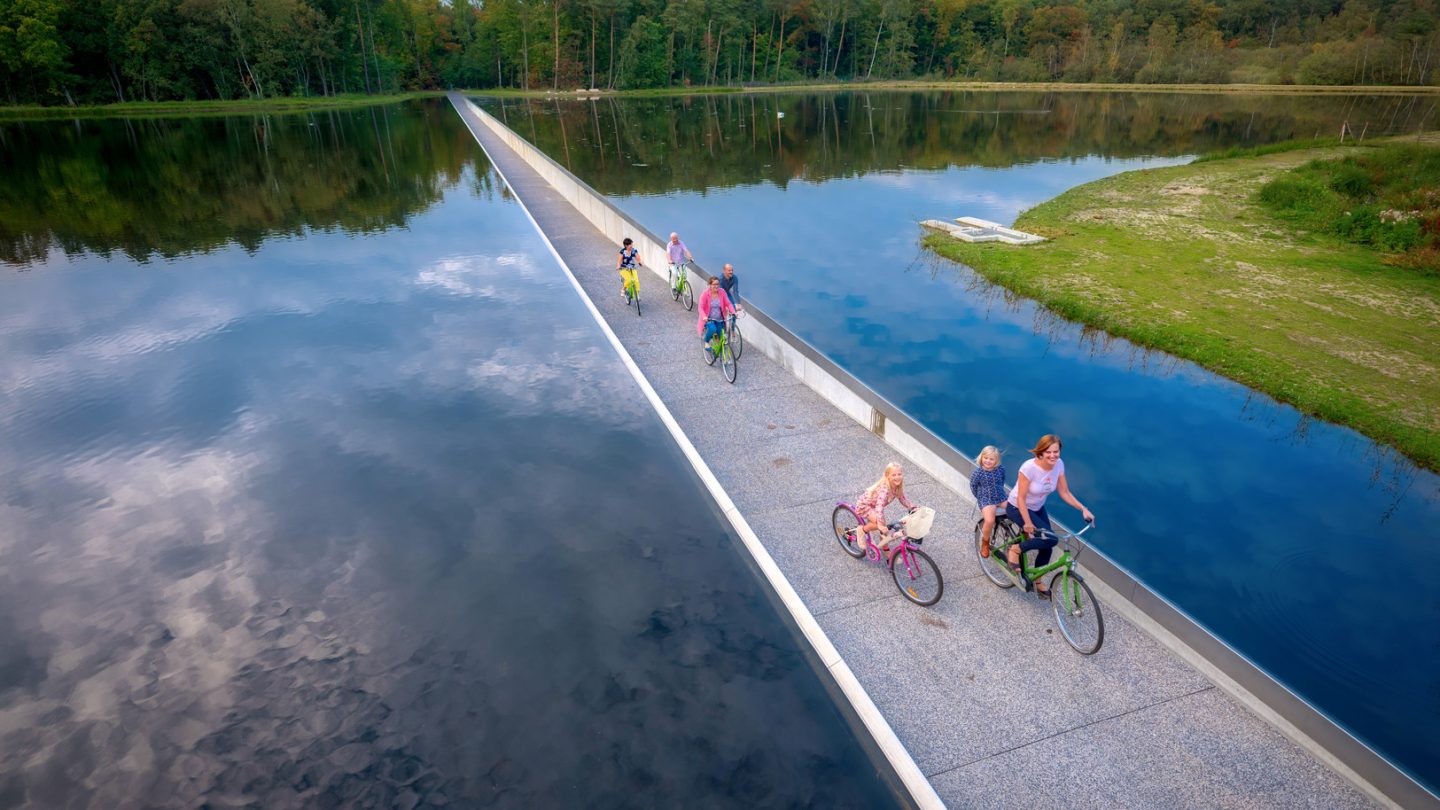 Ethereal cycling experiences are what both dreams and local economies are made of.

Imagine cycling amid the treetops, pedalling 10 metres above the ground eye to eye with a passing song bird. Or riding across a lake; not above but actually through it, in it, without making a ripple? Sound impossible, like some fantastical dream? Then, go to Limburg in Belgium and you can make dreams come true.

Limburg is a province in the north east of the country, and a cycling mecca. It has 2000 kilometres of paved, car-free cycle paths that wend their way through verdant landscapes linking cultural heritage sites, local villages and natural beauty spots. It has e-bike charging stations, cycling maps with service points, cycle-friendly cafés and accommodations, a dedicated cycle path maintenance team, a cycling app and online route planner, and two joyous experiences named Cycling Through The Water and Cycling Through The Trees.

Igor Philtjens, Chairman of Visit Limburg and Minister for Regional Tourism, describes Limburg as ‘a cycling paradise’. “Cycling is part of Flanders’ DNA and therefore also of Belgian Limburg’s. We have always been fervent varied landscapes in Limburg, we wanted to increase interaction with their natural beauty by creating cycling projects, in synergy with the environment. This brought me to the idea of creating bike paths through water, through the trees, underground… all in strategic locations, that were already iconic.”

This vision has been 25 years in realisation and it keeps on growing, but how did it come into being? Philtjens explains that back in the mid-1990s Limburg’s main industry, coal mining, collapsed. “Coal mines were being closed one by one and the province had to find new ways to stay alive economically.”

Tourism and cycling were identified as economic drivers by the Regional Landscape Kempen en Maasland (RLKM), existing cycle routes were sign posted and mapped, and extra routes added to make nature-oriented attractions accessible. Then, in the spring of 1995, the RLKM played a masterstroke.

It created a cycling map with numbered nodes, based upon the London Underground train system. “Node-to-node cycling was born,” says Philtjens. “Cyclists had the freedom to compile their route and cycle to the most beautiful places, using a simple, user-friendly map and accompanying signage.”

The nodes on the map are numbered intersections in the cycle path network. Tourist attractions, picnic spots etc are indicated, as are the distances in kilometres between each node. With this information
it is easy to plan a route, encompassing tourist sights and rest stops, while knowing exactly how far you’ll be cycling. Signposting along all routes correlates with the numbered nodes on the map making the whole thing virtually foolproof.

Since 1995, the success of RLKM’s node-to-node cycling route has seen its expansion throughout all 42 municipalities within the province of Limburg, across provincial borders and even into the Netherlands. This success has been largely due to marketing organisation, Visit Limburg, and Philtjens, whose job it is to keep ahead of the chasing ‘peloton’.
“Over the years, other regions and countries have copied the Limburg cycle node network. So to maintain our pole position, we need to keep innovating, not necessarily by creating more miles, but by creating even better ones. Lately we have started adding extra ‘cycling experiences’. In this way we continue to build the image of Limburg as the ultimate paradise for cycling tourism.”

Visit Limburg has achieved this with massive support from public funds. The network is maintained using public money and Cycling Through The Water and Cycling Through The Trees cost tax payers €4.1 million in total. But the benefits to the province far outweigh these costs, explains Philtjens: “In 2018, over 2.8 million recreational cyclists used the cycle node network and spent a total of €82 million on food and drink, locally. Moreover, the number of tourists staying overnight in Limburg has increased by 24 per cent in the last six years. That’s 4.3 million overnight stays, boosting the local economy by €422 million.”

So, economically, Limburg’s node-to-node cycle network is a winner, but that’s not what the average cyclist goes home talking about. Their eyes light up as they describe pedalling down into the lake, their eyeline gradually coming in line with the water’s surface. They grin as they tell of spiralling upwards into the treetops. Then, they say they are definitely going back to visit Cycling Through The Heathland, the latest ‘experience’, which opens later in 2020.