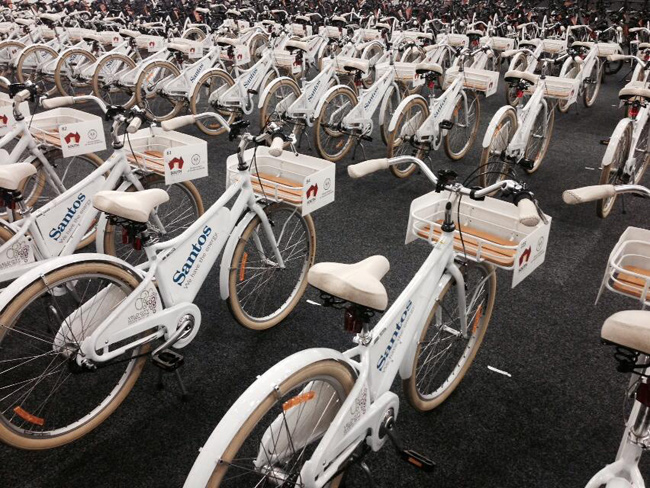 Velo-city Global 2014 got underway Tuesday May 27th in Adelaide, Australia with over 600 participants from all corners of the globe. An unlikely city to host a global cycling conference you may well have thought, but a city that sees this conference as just one part of their strategy for transformation.

After a warm welcome from the Kuarna people, led by Jack Buckskin, Lord Mayor of Adelaide Stephen Yarwood delivered a passionate invitation to delegates to use their presence at the conference to demonstrate to locals the positive presence of cyclists in the city, either by jumping on the bikes provided and getting out onto the streets of the city or by engaging with online discussions via social media.

European Cycling Federation (ECF) President, Manfred Neun touched on the significance of the Conference’s presence in Australia and the launch of the World Cycling Alliance planned for Friday.

Circkidz, a local project providing meaningful recreation and community engagement opportunities for disadvantaged youth through circus training, enlivened proceedings and provided yet another perspective with an engaging interpretation of young people’s views on personal transport, freedom, mobility and independence through dance and acrobatic skills and performance.

Mikael Colville-Andersen of Copenhagenize talked about the the life-sized city, the five senses engaged in a city experienced on this scale, particularly while engaged in transportation, and the power of this as motivation. The tentative ‘baby-steps’ often seen in Australian cities were called out with a rousing reminder that “Buenos Aires added 140km of separated cycle tracks in 2 years.”

The afternoon saw several streams looking at topics as diverse as e-mobility, the cultural re-framing of cycling and ideas around public space amongst many others. A presentation by Ethan Kent of Projects for Public Spaces, on placemaking kicked off the final session before Bojun Bjorkman-Chiswell reminded delegates that suppressing cycling globally hurts women the most and that the key to bringing cycling back into our cities is to make it safe for everyone to ride.  Bojun also raised the issue of mandatory helmet laws and the difficulties they present in getting more people cycling. This last point was echoed by the following speaker, Janette Sadik-Khan. Sadik-Khan described the transformation of New York over the past few years during her time as Transportation Commissioner in the Bloomberg administration, and the shape that the sort of leadership required to make those changes takes in practical form.

This first day of the conference also saw the awarding of many of the Cycling Luminaries Awards. Pip Caroll of Melbourne’s The Squeaky Wheel won the Bike culture and behaviour change category while Melvin Mansell of News Corporation won the Leadership (Australia) category. Alice Lewis of Night Brigade won the Cycle Chic category for her subtle reflective fashion and Mark Allen won the Next Generation Award for his work in Queensland with bike buses getting kids to school on their bikes while the First Nations award went to The Cycling for Culture Program