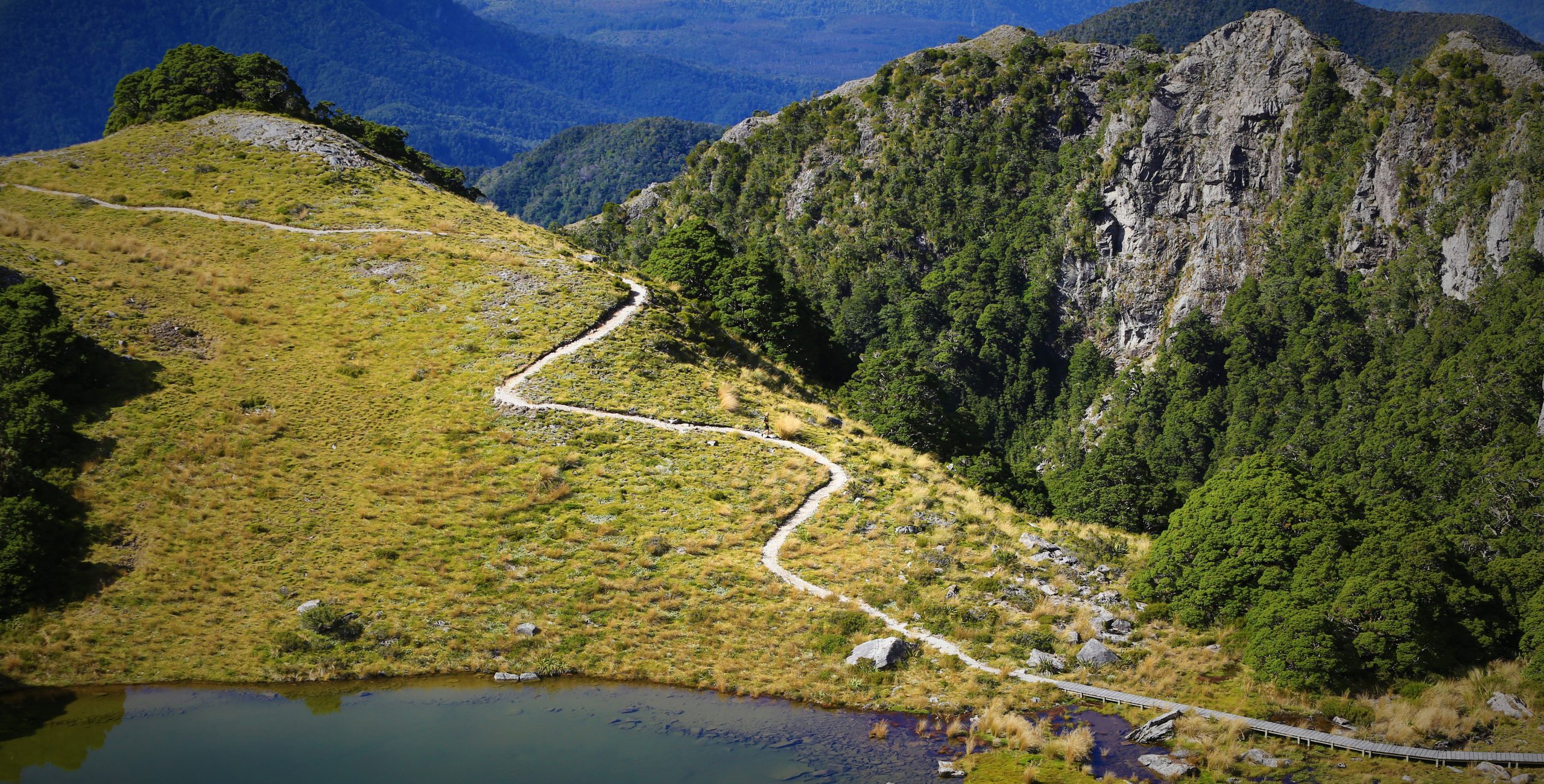 Deep in New Zealand’s South Island, in the remote Mokihinui-Lyell backcountry, a ghost of days past has been revived and restored.

The tale is a compelling one; 130 years ago miners attempted to connect the profitable Lyell goldfields with promising fields in the Mokihinui, but the terrain proved too difficult and the route was never completed.

Then in 2007, in a strange fluke, a copy of the original 1886 reconnaissance survey made its way into the hands of Marion Boatwright, an avid adventurer who quickly enlisted three others – Phil Rossiter, Steve Stack and Wayne Pratt – to pursue his vision of a mountain biking trail along the same road and succeeding, in a totally different way, where the miners failed.

“It really did come down to happenstance. A range of variables miraculously converged at just the right time that meant the vision and will to take it on existed,” says Phil Rossiter.

“At the centre of it all was the discovery of [that] old map … An exploration mission was soon underway and before we knew it, the fire was lit.”

And what a fire it was. For nine years the four men toiled over the 85-kilometre trail, pushing for government backing and gaining the support of “more than 420 individuals from all over the world”, culminating in 30 000 volunteer hours so far.

“From what we can tell, it’s right up there with the most notable volunteer endeavours of its type given the remoteness of the project,” says Rossiter.

However it wasn’t long before the core team realised they needed some professionals thrown into the mix and it was then that the Mokihinui-Lyell Backcountry Trust (MLBT) was formed, an organisation that Phil Rossiter now chairs.

At the height of construction the trust employed 21 people, some of whom had been made redundant from the mines, and slowly, with many obstacles in between, The Old Ghost Road began to take shape.

“Every ‘stage’ genuinely has a different character – we designed it that way. They all show a different face depending on the weather and season, yet they’re all stunning in their own right”, says Rossiter.

“There is something very privileged and special about riding across open alpine stops, especially having climbed up there, but the Boneyard (an other-worldly landscape created by an earthquake) is hard to beat, as is the cliff-hugging section of trail down the majestic Mokihinui Gorge.”

Funding-wise the 6.5 million dollar cycleway is part of the New Zealand Cycle Trail initiated by Prime Minister John Key in 2009, with 61 per cent of the cost being met by the Government. The rest was made up of “grants, sponsorships and public donations.”

“We estimate it’ll cost between $300 000-$400 000 per year to maintain all the trail, huts, bridges and facilities … We aim to be entirely self-sustaining; we have no other revenue streams and are not subsidised to look after the trail … this endeavour is proving to be as much of a ‘journey’ as actually constructing the trail was,” explains Rossiter.

It was December 2015 that the trail was finally declared open and for just over a year it has been “outstripping all expectations, as has feedback and user satisfaction.”