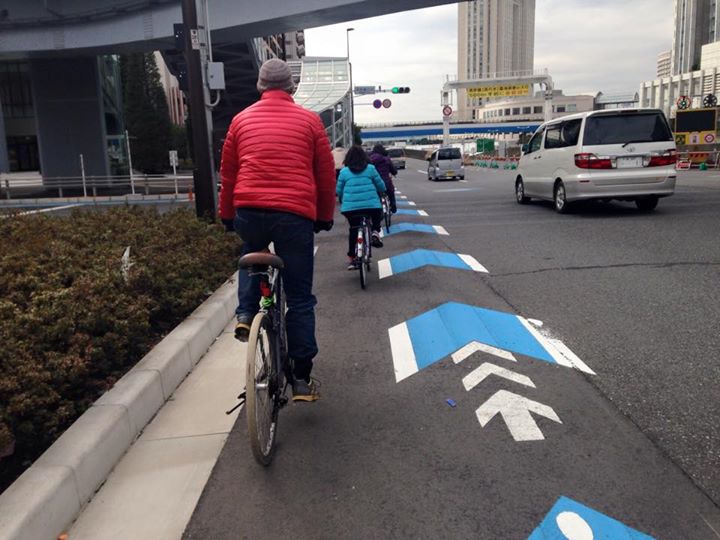 We recently visited Tokyo, Japan, where Byron Kidd of Tokyo by Bike was kind enough to take us on a Tokyo discovery tour. While we’ve often enjoyed riding our rented mamachari’s around Tokyo’s back streets it can be difficult to get an overview of Tokyo as a bike city, as anyone who has ridden there will know. In a city where bike use often depends more on acceptance than more concrete and visible items like infrastructure, it was great to have a guide to show off the different ways in which Tokyo gets around by bike.

We started off in Shimokitazawa where as in most areas of Tokyo, riders and pedestrians share road space with cars in quiet back streets. Once on arterial roads riders can often choose between riding with traffic or riding on those footpaths which have been designated as shared spaces. On those streets with low pedestrian use this worked quite well but as we rode up through Harajuku and the shopping strips of Roppongi the limitations became clear.

On both road and footpath it was riders who had to do most of the dodging, around the dominant traffic and for whom neither infrastructure had been specifically designed. One thing we did notice was that the lanes designated for cyclists to cross roads at pedestrian crossings had been removed in several areas.

Our ride also took us over to Odaiba, a new area of Tokyo built on reclaimed land and where construction of future olympic venues is underway. Crossing several bridges our ride varied from designated separated bike paths, to painted areas on the roads to sharing, mainly empty, footpaths. Much of these areas had been designed to have very little street life, there were few shops or homes at street level with multi-level apartment and shopping-malls dominating the landscape and the distances from one area to another weren’t comfortably walkable.

There was a lot of road space and lots of construction traffic due to the sporting venues being built. While there was very little bike parking on the street, a shopping mall housed in a high-rise building did provide designated secure bike parking in the same basement that car parking was housed.

The quintessentially quirky Japanese moment of the tour had to be our Rainbow Bridge crossing. Bicycles aren’t allowed to be ridden over the bridge and to make sure that you’re not tempted to jump on yours once outside of the guard’s view a wooden ‘skate’ is clamped to your rear wheel.

Many thanks to Byron Kidd of Tokyo by Bike for making the time to show us such a varied degree of Tokyo cycling!