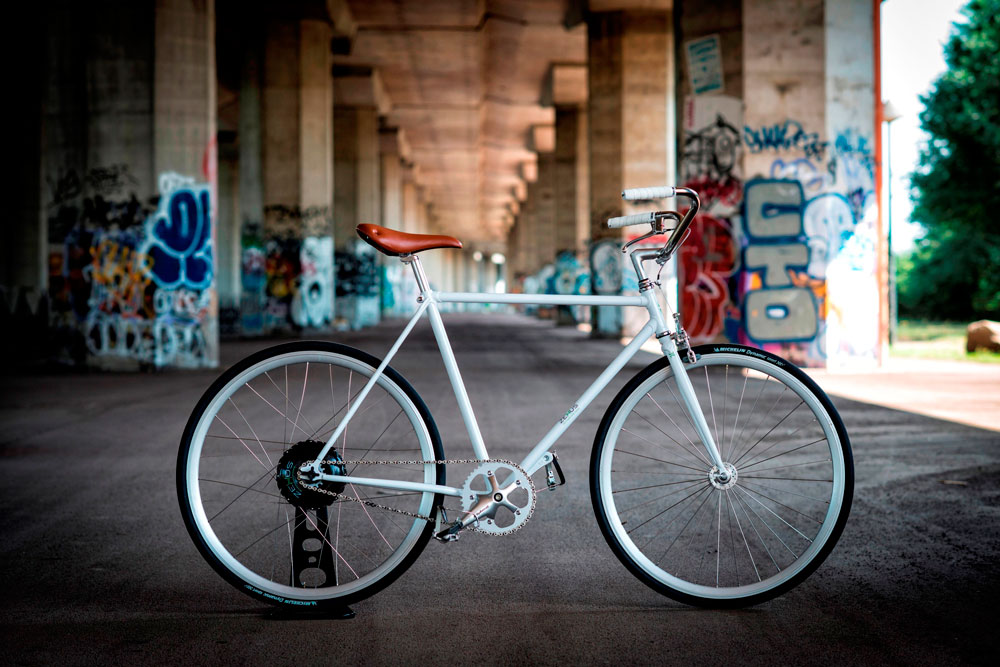 Dyson’s new Bike+ system was designed and developed in Italy by ZeHus. This small lightweight hub has been inspired by electric vehicles such as the Tesla and Formula one racing cars. Weighing just 3.2 kilograms, this stylish hub contains everything needed to create an e-bike, with an integrated motor, control system and battery.

With the Formula 1 inspired KERS system you can also regain energy by back pedalling, extending the range of the e-bike between plugging-in.

“It’s such a great system, with everything contained in the hub it makes the bike so clean and simple without missing any of the benefits of riding an e-bike. We knew as soon as we rode it at EuroBike last year, that we had to have it for the Australian market,” said Naomi Dyson, founder of eponymous Australian electric bike brand.

The lithium-ion battery pack surrounds the motor, and the pedalling sensor is built into the internal freewheel mechanism. Because all of the hardware is mounted to the rear wheel, there aren’t any extra wires or components around the frame – and no large battery adding weight to the ride.

The Bike+ also offers Bluetooth connectivity, which works with the free smartphone app (iOS and Android compatibility). This enables the rider to select their favourite power mode, manage trip data and even secure the bike.

Your device also acts as a gateway to the Zehus community – allowing you to access services like online diagnosis, bike oriented navigation, mobility stats and even the possibility of finding a stolen bike.

Naomi Dyson explained e-bikes were continuing to grow in popularity in Australia, with sales now accounting for a large slice of the 1.4 million units a year bicycle market nationwide.

“We find that a lot of our customers are choosing an e-bike because it not only gets their cars off the roads and helps reduce traffic congestion, it also gives them a chance to exercise at the level they feel comfortable in doing so,” she said.

Dyson Bikes will have the first product in the Bike+ range available this Summer, a super light titanium model or a bespoke bicycle built to an individual’s exact measurements and riding style.