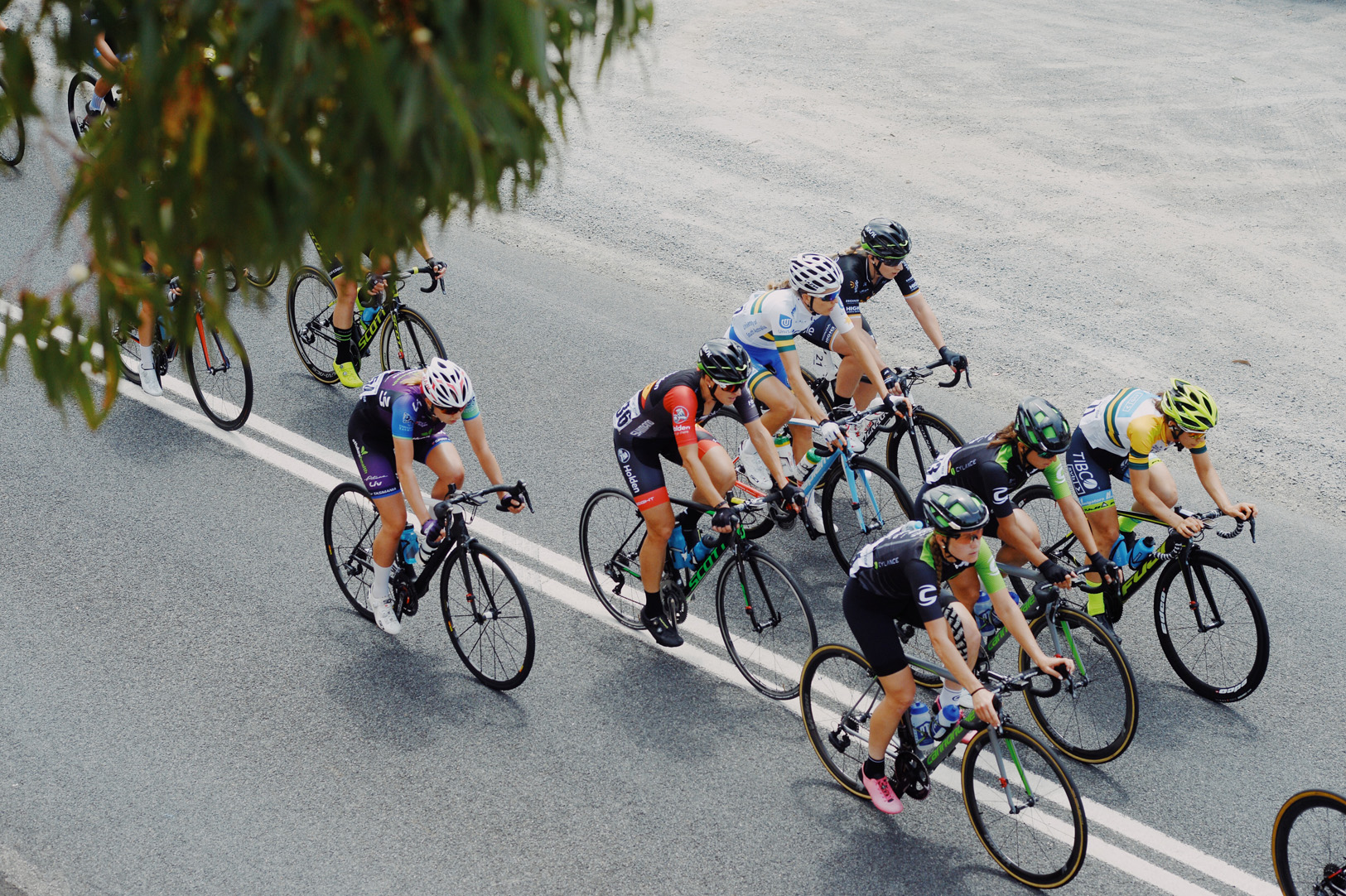 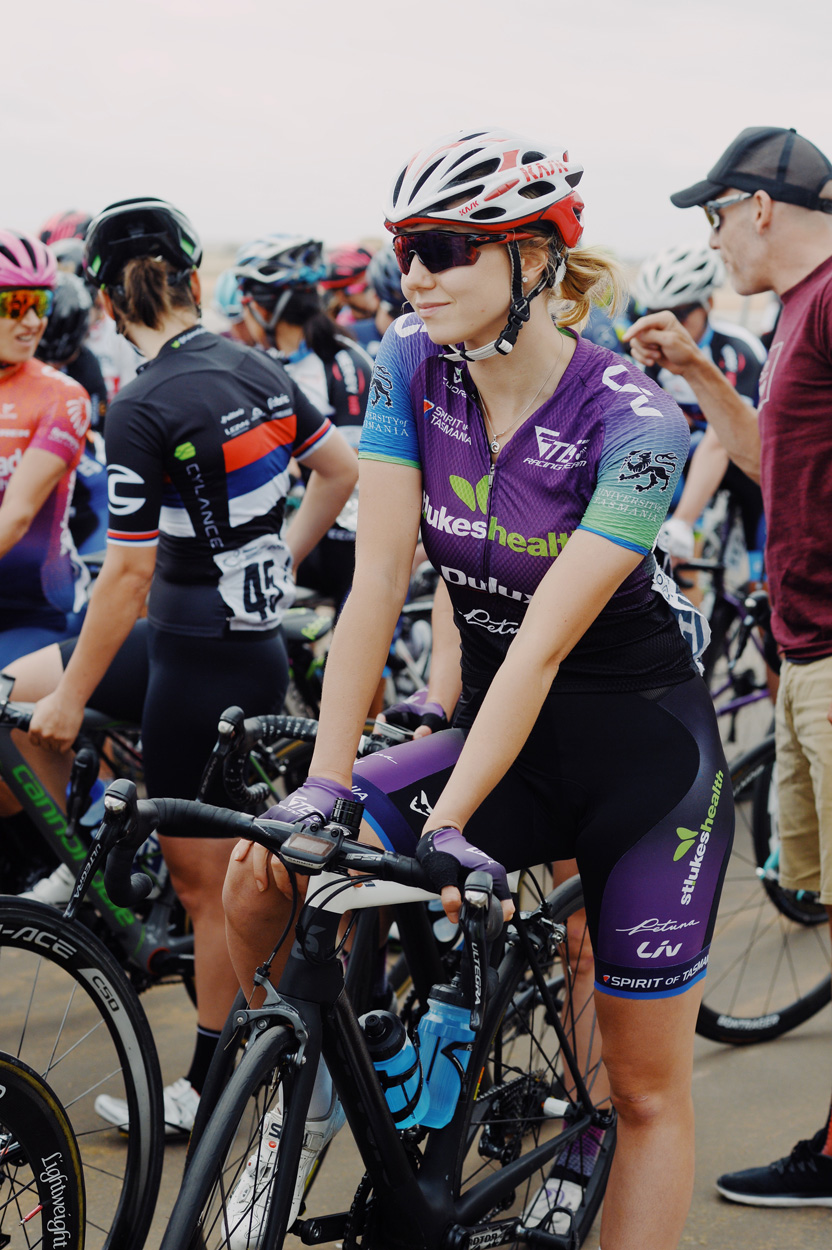 In the space of a few months, Maeve Plouffe went from finishing high school to racing in the Santos Women’s Tour Down Under 2018. We spoke with Maeve about her road racing experience and what ’s next.

For Maeve Plouffe, the moment that sparked her foray into road racing came at last year’s Santos Tour Down Under. “Being able to present [jerseys] last year made it real for me,” she shares. After rubbing shoulders with the competitors, Maeve felt totally inspired. “[I wanted] to get on that stage. Those girls … they are everything that I want to be.” Fastforward one year, and she has just raced alongside them at this year’s Santos Women’s Tour Down Under (WTDU). Not a bad effort for someone of any age, let alone an 18-year-old.

Racing in the WTDU is no small undertaking. The event is made up of four stages and covers hundreds of kilometres; and this year competitors were assailed by extreme weather conditions. “It was probably the toughest bike race I’ve ever done,” Maeve says. She laughs when she recalls scorching temperatures that reached 40 degrees on the first day.

Clearly, this South Australian is made of tough stuff. Her WTDU debut posed distinct challenges for Maeve, who got her start as a track rider. “I had never even ridden in a proper peloton before,” she explains. “That was really scary at first, just being so tight and close [to] the other girls.”

It almost goes without saying (or writing), but the truth is that challenging yourself is never easy. Maeve remembers feeling daunted by the scale of the competition: “Every day I’d get into that bunch and be like: ‘I don’t know if I can do this’. Then crossing the line every day, you’re like: ‘I just did that!’ – that’s amazing.”

She fondly recalls a highlight of the tour, sharing: “It’s pretty cool when you’re riding along and the World Champion rides along next to you. You kinda have to pinch yourself.” Maeve’s team fared well in the gruelling competition – two of their riders placed in the top 10 on the first day.

Despite what her evident cycling prowess might suggest, Maeve is relatively new to riding. She doesn’t come from a family of avid cyclists and was originally an open water swimmer. She found cycling through a talent ID program a few years ago and, in her own words, started riding properly at 15 or 16. “They put me on a track bike and I went out for the first time and I was like: ‘Oh my goodness … I love this’ and that was it for me, pretty much.” The rest, as they say, is history.

After the WTDU, Maeve had just three days of recovery before returning to training for the February Track National Championships. Although she has a background in track racing, Maeve looks forward to participating in more road events in future. “[The WTDU] showed me what I’m capable of on the road and I’d never really gotten to push myself to that level before. That was something completely different. That was next-level racing.”

Somehow, Maeve finds the time in her demanding training schedule to do patrols as a surf lifesaver and she completed year 12 just last year. Maeve credits her family for her success, saying: “They’ve always been there, not only supporting me emotionally and mentally, but financially. [For me] to finally make it in the professional peloton and to be able to race with those girls – they’re just as excited as I am.”

Maeve’s accomplishments have already earned her a fan base. “A couple of little girls from my local club made me a sign and they were standing on the top of all the stages and cheering for me as I went along,” she tells.

“In the city circuit I did a bit of a recovery lap and there were so many girls standing on the side wanting a high five,” Maeve shares. “That’s what really makes it special, to finish that race and see that. I hope that we can get so many more female cyclists in the sport.”

As for Maeve’s advice for the little girls who aspire to one day ride in her footsteps? “Enjoy it – because if you love what you do, you’ll put all your effort into it … every day when I wake up, I want to train. I think that comes from just loving what you do.” Wise words indeed.