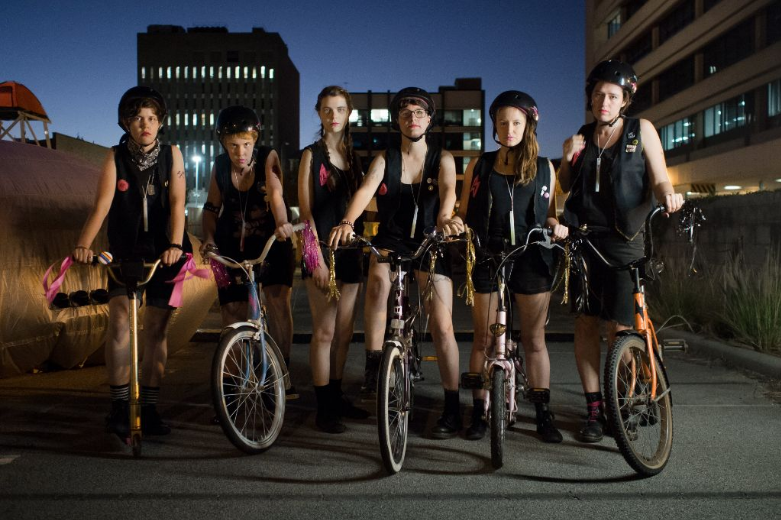 The Lightning Furies is a new live art project that takes the form of a feminist bike gang. It will debut at Crack Theatre Festival as part of This Is Not Art (TINA) in Newcastle on September 29 and run till October 2.

With a two-stream approach of craft workshops (Badass Bike Bling) and public performances taking place on bikes (The Lightning Furies), the project addresses concerns around female riders claiming space on the road in a male-dominated cycling culture.

When you sign up to be a Lightning Fury, you’ll make bike accessories, learn percussion, and take on a secret gang identity. Clad in pink, gold and black, the Furies will hit the streets, pedalling through Newcastle in a cacophony of bicycle bells, a rush of handlebar tassels.

You’ll learn to be your bravest self, ride in a pack, and smash the patriarchy with boots and glitter. Participation in this work is for female-identified and non-binary folks.

The project is being presented by Snapcat – a collaboration between Perth artists Renae Coles and Anna Dunnill. Together they make participatory performances, paintings and objects. They are currently artists in residence at CIA Studios, West Perth.

“As female commuter-cyclists in Perth, we’ve noticed that the local cycling culture is overwhelmingly an expression of athleticism, aggression and machismo. It’s a space dominated by lycra-clad male bodies, and if that’s not you, it can feel pretty unwelcoming.” Snapcat explain on their Pozible page.

“Additionally, while cycling infrastructure in this city is slowly improving, there’s a long way to go; and drivers are frequently intolerant of bikes on the road. We discovered that many of our friends (particularly female friends) chose not to ride because they felt too vulnerable and unsafe in many locations.”

Help Snapcat fund The Lightning Furies via their Pozible.