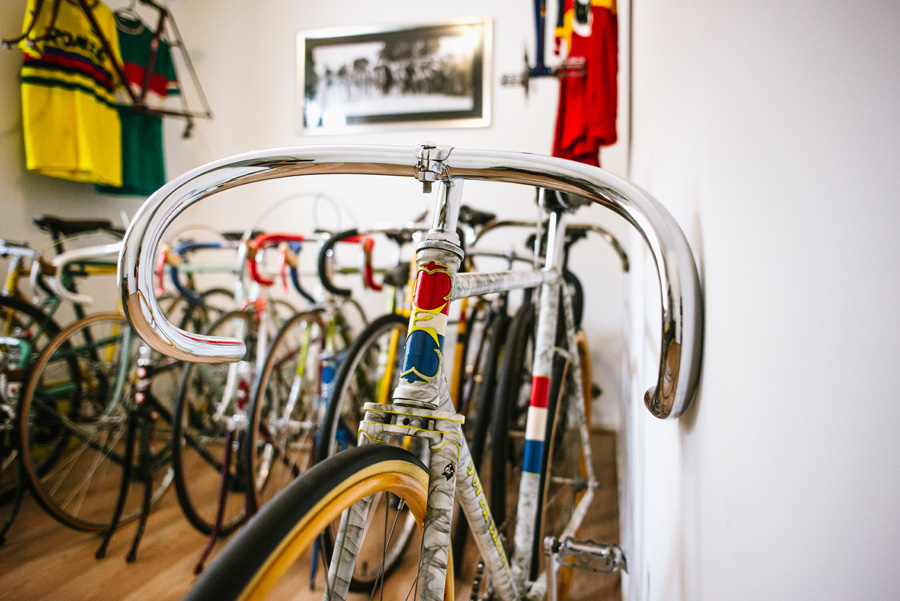 What began as a boyhood fantasy has become a reality for collector and restorer Mario Romeo.

As a boy, Mario Romeo would gaze into the window of his local bike shop. “I was always into road bikes,” he says. “Mine were more likely from Kmart, cheap bikes, but I used to fantasise about Colnago and Vitus, things I couldn’t afford. I splurged later on.”

In high school Romeo made some modifications to his father’s old Healing, drilling holes in the top tube to conceal the cables. “Looking at it now it’s a disaster that I ever thought about doing that,” he says. “The holes are now hidden by pump clamps.”

Romeo still has the Healing, along with his grandfather’s Humber. “Ten years ago I found them and it kicked off my collection. I started collecting absolutely everything I could get my hands on,” he says.

“It’s been thinned out a bit. Now I mainly collect bikes from the 1930s and 1940s, with a focus on Adelaide builds. In the art-deco period they really crafted their work. There were so many manufacturers, they had to do something special to stand out.”

Now numbering somewhere between 50 and 60 bikes, Romeo’s collection is a mix of Australian and English, with a few European models thrown in for variety. Among the Europeans is an eye-catching 1938 Romeo, imported by its namesake collector from Italy.

“I like this one because of the name and the strange gearing,” he says. “It also has internal cabling, something later seen on road bikes in the 80s and 90s.”

The Romeo features three-speed Vittoria Margherita gearing, an early form of derailleur. The rider had to stop pedalling and release the tension on the chain with a ratchet lever above the chainring. Then, pedalling backwards, a twist of the top of the lever guided the chain up or down. Once the desired gear was engaged, the tension was reapplied.

Another pre-war innovation that took some refining before it became mainstream can be seen on a 1930 clubman machine from Victorian builder Bob Finlay. The Barb is notable for its single spring at the rear. There’s no pivot involved, the flat-section chainstays were intended to flex. “I think they were prone to cracking,” says Romeo.

One of the collection’s most eye-catching cycles is a 1949 Hetchins Super Special. Fully restored over four years, its black paintwork features gold pinstriping by Ken Dickey, known for his work at the Malvern Star and Bates factories. The chromed rear stays have a distinctive curve to them. Beautiful, yes, but the curve had a more prosaic intent. “In the 1930s they weren’t allowed to advertise the bike brand in races,” says Romeo. “The curved stays made it obvious it was a Hetchins as they raced past.”

The most recent restoration is a 1937-38 Super Elliott with candle-effect paintwork, fancy chrome lugs and a flag-and-skull motif on the front forks. Its wooden rims and huge, inch-pitch chainring mark it as a track machine.
“It took me a year or so to find all the parts for it,” says Romeo. “I’m told it was still being raced 20 years after it was built.”

Any one of the bikes lined up in Romeo’s house would be interesting. Together, they’re remarkable. An Ace Special with incredible pinstriping, a circa 1905 racer of unknown make, a Phil Thomas Special made for Juliette Irving in the 1930s, a 1967 Legnano, an immaculate 1953 Bianchi built to commemorate Fausto Coppi’s World Championship, bikes from Healing, Thanet, Speedway – it’s hard to know where to look.

Among the complete bikes are frames awaiting attention, including Super Elliotts and Malvern Stars with two, four and five stars on their head tubes. Pressed to point out a favourite, Romeo is stumped.
“They’re all my favourites,” he says. “If I’ve still got them, it means they’re my favourites. I have sold off a few. Usually my wife says if I buy some I have to let some go.”

In addition to the 20-odd bikes and frames gathered for Treadlie to admire, Romeo has another 40 or so in various states of repair. “They’re mostly original, barn finds, some of them are a bit tatty,” he says. “I prefer them original, it’s only if they’ve been rattle-canned that I’ll give them a full restoration.”

Along with the bikes, Romeo also collects memorabilia. The largest example is a 1940s Healing radio, built by the same company as the bicycles, but the majority comes in paper form.

“I like collecting catalogues for the bikes I have, so I can see the spec,” he says. “Paperwork and race programs are really hard to find.”

Among the yellowing documents are a pre-war Super Elliott Encyclopaedia of Cycle Accessories, brochures from the 1920s, promotional photographs of cyclists like Jack Konyers and Frank Watson, and a 45rpm record from Bianchi featuring highlights of race commentary.

Romeo’s collection is impressive, but he’s still motivated to keep searching. “Seeing other people’s collections always makes your own look really bad,” he says. “One of my wife’s friends in Taiwan has about 600 bikes, all of them one-off specials – Colnago, Masi, Moser. Once a year I like to see him – I come back all inspired.”

The bikes in the collection may have been painstakingly restored or preserved, but they do get used, albeit sparingly. “I do a bit of Sunday riding with friends on a modern bike,” says Romeo. “On the old bikes I stick to the flat, ride to my parents’ and back. That’s enough.”

The collection is mostly housed in Romeo’s parents’ shed, something that pleases his wife Janice. “She is quite supportive,” he says. “While everything is at my parents’ she’s quite happy. She keeps asking me when I’m going to build her bike.”

Understanding she might be, but some things really only make sense to a collector. “Janice will sometimes ask what I’m doing, just standing there in front of a bicycle,” says Romeo. He usually has a simple answer: “I’m just looking.”