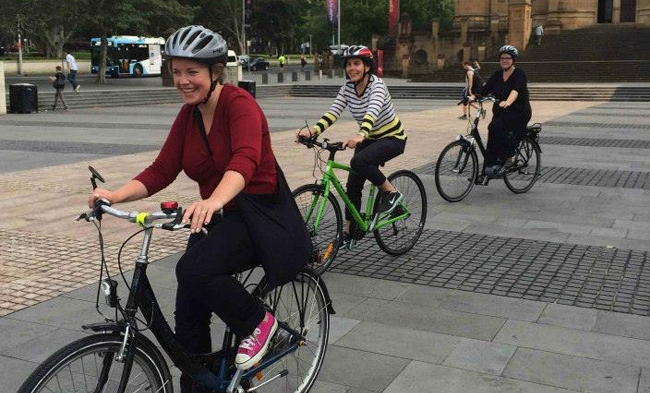 Politicians from Sydney, including Federal Shadow Minister for Infrastructure and Transport Anthony Albanese, pedaled through the Sydney CBD in peak hour as part of the The Big Push on Friday 24 October during the Sydney Rides Festival.

The ride built on the current community momentum towards cycling, with trips increasing by 132% in the past four years in the City of Sydney area. The Big Push aimed to demonstrate the benefits, opportunities and challenges of commuting by bicycle in the city. By participating first-hand, politicians will understand the realities of cycling and the need to enable a safer, more enjoyable cycling experience through the coordination of a cycling infrastructure network.

“I welcome any politician who gets on a bike to experience first-hand the benefits, opportunities and challenges of cycling around the city,” said City of Sydney Lord Mayor, Clover Moore. “Sydney’s population of cyclists is growing – we’re building a network of cycle lanes to meet that demand and to make the city safer and better connected for our cycle commuters.”

Sixteen politicians and business leaders took part in a seven kilometre tour of inner Sydney. Political leaders getting on their bikes include Federal Shadow Minister for Infrastructure and Transport Anthony Albanese, NSW Shadow Minister for Transport Penny Sharpe and Marrickville Mayor Mark Gardiner. The riders were accompanied by members of the cycling community, including bike shop owners, representatives of Bicycle NSW and daily commuters.

The Big Push rode along cycleways highly trafficked by commuters. The ride demonstrated a range of cycling infrastructure, including segregated lanes, shared paths and roadways. In a city recently rated the 17th most congested city in the world, it was an illuminating experience on many levels.

“It is inspiring to see five young community leaders take action on a such a powerful idea,” said Jon Leighton, President of Bicycle NSW. “The Big Push showed the fantastic work that has been achieved, and demonstrated the important priorities ahead, as we create a better environment for cycling in Sydney, NSW and across Australia.”

The event was organised by Fellows from the Centre for Sustainability Leadership, with support from the City of Sydney, Bicycle NSW, Bendigo Bank, The Awesome Foundation, and volunteers from the cycling community. The organisers plan for The Big Push to be an annual event to encourage more politicians to experience cycling and keep the cycling infrastructure conversation going.