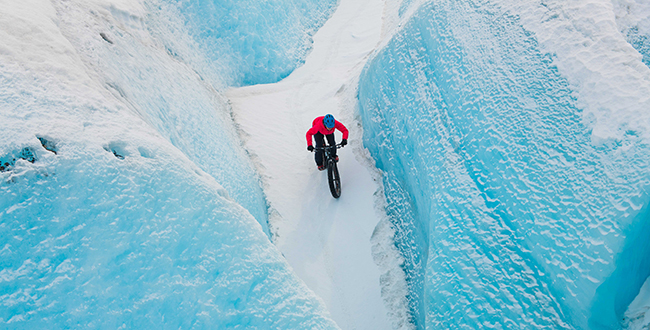 A feast of films devoted to the bicycle and all who ride is pedalling its way through Canberra, Launceston, Hobart, Melbourne, Bendigo, Geelong, Adelaide, Brisbane and Sydney over August and September 2019.

The Big Bike Film Night showcases the colourful array of cycling genres at hand. “Our vision with this event is to share the best cycling short films from around the world,” says the New Zealand based Curator/ Film Pedlar Brett Cotter. “We focus on the ‘human interest’ side, and these films are a great reminder of why we love to ride with stories that celebrate the fun, adventure and inspiration that cycling enables.”

After the phenomenal response from last year’s visit to Australia, Cotter made the very easy decision to return with the 2019 film programmes to two wheel devotees in Australia.

“Not many people would be proud to have their event described as weird, wacky and wonderful, however that is probably one of the best ways of describing this celebration of the humble bicycle,” says Mr Cotter.

The dynamic film concept showcases a range of short cycling films from across the globe; from the Alaskan glaciers to the urban neighbourhoods of Auckland, to the boundless landscape of Australia, with a selection offering plenty of appeal and thrills for pedal patrons and movie goers.

“This is our fifth collection – our fifth vintage, so to speak – and it features the full array of cycling genres with something for everyone, whatever your ride is.”

“Expect action, drama, humour and plenty of inspiration in the 2019 mix,” says Mr. Cotter. “There are eleven short films being presented ranging from two to 27 minutes in length, including a number of international award-winners.”

Featuring in the line-up are films on the spectacle of winter with the icy playground providing a visual journey as never seen before by bike; a fixie rider who commits a crime of passion; an infectious French cyclist with the joy of life; a New Zealander who has a two-wheel love story to share; a heart-warming documentary about a ‘community mother’ who runs a bicycle training program for migrant and refugee women in Amsterdam; and two pioneering mountain bikers undertaking an adventure in wild and unknown landscapes, riding only horse trails, in heartland Africa.

Mr. Cotter says he is full of admiration for all these films, but one stands out in particular, Lowest to Highest, a documentary made by Tasmanian Film Producers RUMMIN,  follows five friends  attempt to be the first to cycle across the Australian continent’s lowest point to the highest point.

“Over the years I’ve had the pleasure of sharing an innumerable number of inspiring cycling films and this film is undoubtedly one of the best,” says Mr Cotter.  “This 2150-kilometre expedition has plenty of adversity and challenges for the team to overcome, but if this wasn’t enough to deal with, the five members of the crew all have significant disabilities. The tagline of ‘What could possibly go wrong?’ sums it up precisely,” says Mr. Cotter.

“Our event celebrates cycling in all its glorious shapes and forms,” says Mr. Cotter.  “Regardless of whether you’re a cycling fan or a cinematography fan, there is something in the 2019 line up that everyone should see.”

For more information, and to buy tickets to a screening in Canberra, Launceston, Hobart, Melbourne, Geelong, Bendigo, Adelaide, Brisbane. or Sydney visit bigbikefilmnight.nz