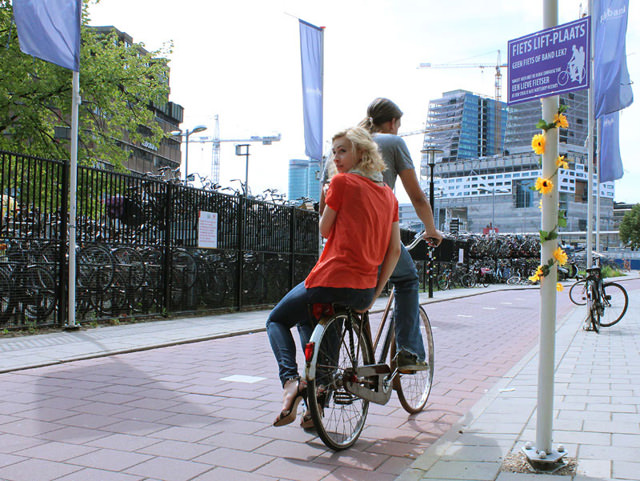 No bike or flat tyre? Wait here with your thumb out until a nice rider takes you with them reads the sign.

While dinking may be illegal in Australia in many countries it is still common to see family and friends dinking each other to work, the station, the pub or more likely, home again afterwards. The Netherlands is one of these places but even so, the Dutch Cyclists Union thought more sociability amongst cyclists should be encouraged.

Teaming up with artist Mapije de Wit they created several ‘official’ bike hitchhiking spots or Fiets Lift-Plaats by installing signs around the city of Utrecht inviting bike-bereft cyclists to try hitching a lift on the bike path. Tested by this reporter it seems at least some of the Dutch are willing to offer a stranger a ride on their bike.

While the City of Utrecht has some concerns about the project, the signs have been fixed illegally and in busy cycling areas could add to rider confusion, they can see the charm in the initiative and have said they will be allowing a couple of signs in less busy areas to remain in place. The art of dinking is alive and well!