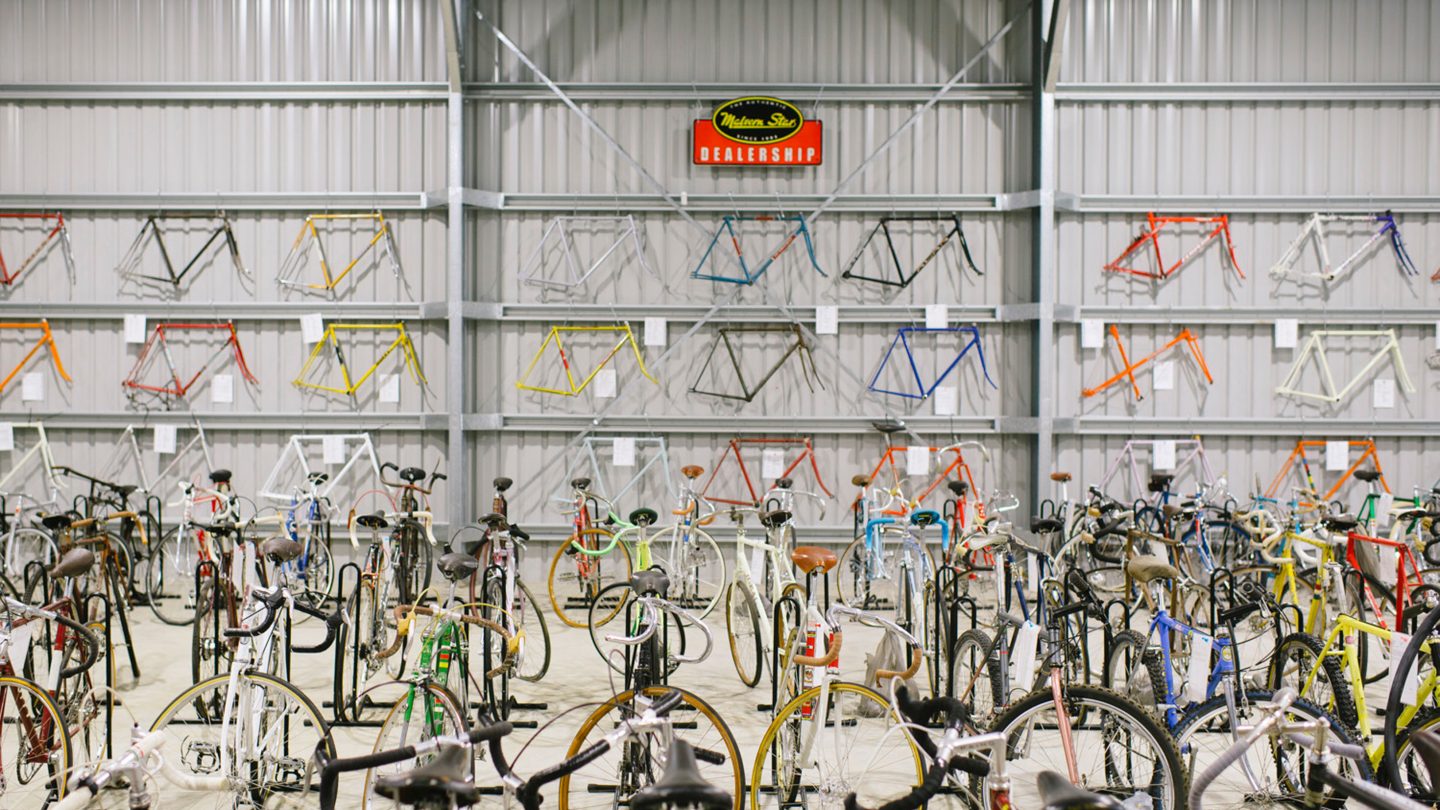 Steve Nutt’s meticulously curated collection of more than 200 bikes is a tribute to legendary Australians from the cycling world.

Some might say Steve Nutt found his passion late in life; at 65. But in five short years he has more than made up for lost time, amassing an astonishing array of Australian and international racing bikes of historical and sporting significance. The size of this collection (between 200–250 bicycles) suggests, if not physically, that the project has been evolving in Steve’s subconscious for many years.

Its genesis is a humble Malvern Star 5 Star – the racing bike Steve yearned for as an adolescent in the 1960s. Half a century later he acquired one, then two, and a few more after that. But the numbers don’t really matter now. What’s important are the memories embedded in these bicycles and the people who rode them to victories both famous
and forgotten.

Steve’s museum is a 500-square-metre industrial shed constructed behind his home in Nerang, Queensland. It has no formal street address, just a small sign at the front gate which reads: “You’re entering the Nut House”. Steve’s playful side is a ploy to distract you from his highly discerning nature; proven by his meticulously curated collection.

Once you step inside and Steve apologises for the “mess”, attention is drawn to row upon row of riding machines from every era in history. Each has a detailed specification sheet carefully pinned to its frame. As Steve begins telling his story, it becomes clear there is an encyclopaedia of knowledge waiting to be shared.

Steve’s early interest in Malvern Star has been fulfilled through his collection, refurbishment and trade of models from the 1920s–1960s. His knowledge of this lineage of bicycle manufacturing is impressive. But it’s the missing links in the history which intrigue him most, such as the early Malvern Star models made by racer and founder, Tom Finnigan between 1903 and 1920. It’s been widely accepted that these were somehow erased from history.
At least until a chance internet purchase turned up at Steve’s place with the initials ‘TF’ inscribed underneath. Exhaustive research and consultation with Finnigan’s family point to Steve’s find being possibly the oldest Australian Malvern Star in circulation (1905–08). And it’s here as part of the collection.

Beyond Malvern Star, it’s the personalities of racing who have captured Steve’s imagination.

“I’ve always had a passion for bikes,” Steve says. “I raced mountain bikes as a 40-year-old and I loved it then as I did when I was 15 but I didn’t want to go back and do it at 60. Now I just want to have fun. And I want to pay tribute to the Australians that have ridden and not had the acknowledgement they deserved in the sporting and cycling arena.”

Among Steve’s many passion projects has been the making of historically accurate replica bicycles ridden by champions of Australian cycling – Don Kirkham is one. “Don Kirkham was the first Australian to ride in the Tour de France in 1914, with Snowy Munro,” Steven says. “But he was killed at a young age and never had the recognition he deserved. I’m trying to correct that.” Steve has painstakingly researched, sourced and constructed replicas of the bicycles ridden by Kirkham including a French 1914 Gladiator bicycle and that 1905–08 Malvern Star. Along with
sourced photographs and a charted history, his work shines a light on this unsung athlete.

Another of Steve’s causes is to acknowledge the achievements of contemporary cyclist, Kathy Watt. “She had a rough deal,” Steve says. “She was the best womens cyclist Australia has ever produced – the only one to win medals in both road [gold] and track [silver] events at an Olympics [Barcelona, 1992].” Steve believes her achievements have not been recognised accordingly. Which is why he has made it his mission to build a bike in her honour – a replica of her gold medal-winning ride. “I would have liked to have bought the original bike but she doesn’t have it –
it disappeared,” Steve says.

So he forensically researched and sourced the parts including an Australian-made Ken Evans frame of the
same tubing and frame design.“Her story is pretty amazing,” Steve says. “She’s made the road a lot smoother for the next generation of woman. I think she should be celebrated and patted on the back.”

And for what Steve is doing, so should he.