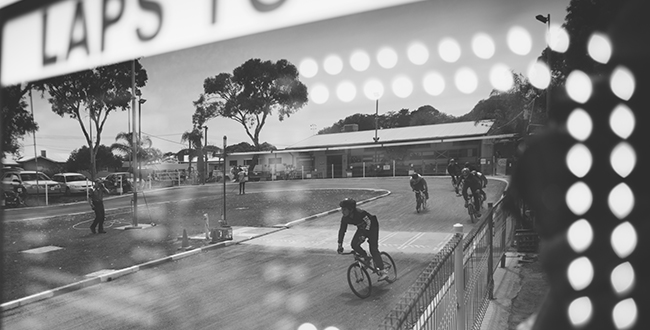 The local cycle club has kicked on over the decades against all odds, none more so than Adelaide’s Findon Cycle Speedway. We went along to check out the action …

“Settle down riders,” says the voice over the PA system. “Steady … you’re under starter’s orders.” The tape flies up and the four riders power off the line, standing on the pedals to accelerate into the first turn. Left feet skimming the fine gravel, they round the turn and pedal hard down the back straight, jostling for position before tipping into the next curve. Eleven-year-old Aerielle Barrett slips up the inside to overtake, holding out her rivals to claim second place after three frenetic laps of the 88-metre oval track.

Aerielle started racing cycle speedway with the Findon Skid Kids two years ago. “My friend started a year before and wanted me to join and race with her,” she says. “I tried it and loved it so I kept going. I like racing against both boys and girls. It’s great, I get to race against people like me.”

The Findon Cycle Speedway has been a fixture in the western suburbs of Adelaide since being founded by Mick Harley in 1958. “I was 15,” Mick says. “I was racing with another club, the Croydon Aces. There was a council gravel dump on my street, so I wrote to them asking for some of the land for a club. The facilities we have here now are second to none.”

Fifty-seven years later, the club is still going strong, with about 70 racers. “We have members who’ve been coming here for 30 years or more,” Mick says. “The majority are under 13. When we get new members they’re rarely over 16, the older riders have all come up through the ranks.”

Cycle speedway flourished in the Blitz-ravaged cities of England after WWII. Modelled on its bigger, noisier cousin, motorcycle speedway, it was a cheap form of sport and entertainment that spread to Europe and Australia.

Its fortunes faded in the 1960s with most Australian clubs folding. “We were the only one left until 1972, when a new club opened in Salisbury,” Mick says. “There are four clubs in Adelaide now.”

The Findon club holds its own race meetings as well as competing with the other three clubs and contesting the world championships, which rotate between Australia, the UK and Poland. “We have a team going to England in 2015,” Mick says. “Usually we get five to eight people going, but this time we’re fielding three teams – ten seniors, six under-18s and six women. There are no grants or anything like that, it’s only those who can afford to go.”

Visiting international teams are a good source of the specialised cycles required for speedway. Many British and Polish riders bring their machines to Australia to compete, then sell them to the locals.

In the early days of cycle speedway, riders raced on old and un-roadworthy machines bereft of brakes or gears, but the sport progressed rapidly. They still lack gears and brakes, but at less than five kilograms, the bikes are uncompromising. “They only race on the latest, lightest bikes,” Mick says. “The frames are specially made for speedway, with a short wheelbase, narrow bars and maxi tyres like mountain bikes for better grip. In the early 60s quite a few raced on 27-inch wheels and frames, but when riders started winning using 26-inch everyone changed. It helps with the gearing.”

The bikes are high quality, but it isn’t an expensive sport. In fact, its affordability is part of its appeal. An adult rider can get on a competitive machine for a few hundred dollars and besides a helmet, long pants and long sleeves, no other equipment is required. Younger riders race on 20-inch wheels, mostly using BMX frames, and newcomers can race at their first five meetings for free, using equipment provided by the club.

It’s an inclusive and welcoming sport in other ways as well. Girls make up more than a third of the competition, racing against each other and with the boys. Riders as young as three-years-old take to the track in the tiny tots section, with older kids providing plenty of encouragement and support.

In one race, a bunch of them join in to make up the numbers as a sole three-year-old takes to the track. They jostle each other behind him, threatening to pass before staging a crash and letting him win. As the kids race throughout the day, Mick Harley commentates over the PA, remembering everyone’s names and offering them tips to improve their times.

But it isn’t all warm and fuzzy. When the older riders hit the track, competition can be fierce. Lining up on the concrete start line, they spin up their back wheel in the air and drop it to clear any loose gravel for a quicker start. With up to 12 riders on track at a time, racing can be very tight.

“It’s a simple sprint,” Mick says. “There’s a lot of physicality, especially with the internationals – you see a couple go over the fence. That’s not unusual against Great Britain; there’s a great rivalry. They’re best of mates, but on the track it’s full bore.”

The club’s most famous member is Olympic track gold medallist Brett Aitken. “He started with us when he was eight,” Mick says. “Even now he still talks of the Skid Kids helping him in his cycling career. On the velodrome everyone would overtake around the outside, but he went straight through the middle, Skid Kids style.”

The Findon Skid Kids have earned international fame in one other way. Their infamous fire jump featured in Ripley’s Believe It or Not! and made headlines in 2013 after three teenagers were burnt when the stunt went wrong. Mick says they’ve fixed the problem, but the fire jump’s days may be numbered. “Health and safety considerations make it hard. We’re seriously thinking about not doing it any more. But it’s a world famous stunt.”

Having made adjustments to ensure the sheets of burning cardboard break up properly, this time the jump goes without a hitch, the four riders bursting through the wall of flame unscathed.

Whether it happens again or not, ultimately the stunt is a sideshow – the real appeal of cycle speedway is close racing on the track and close friendships off it. After 57 years, the Findon Skid Kids still appeal to kids who just want to go fast. Six-year-old Lucas Fernandes came along to try it out and was excited to come third in his first race. “I’m going to win all the races,” he said afterwards. Although still learning to ride, he wasn’t daunted by his bike’s lack of brakes. “I don’t need to stop, just keep racing!”