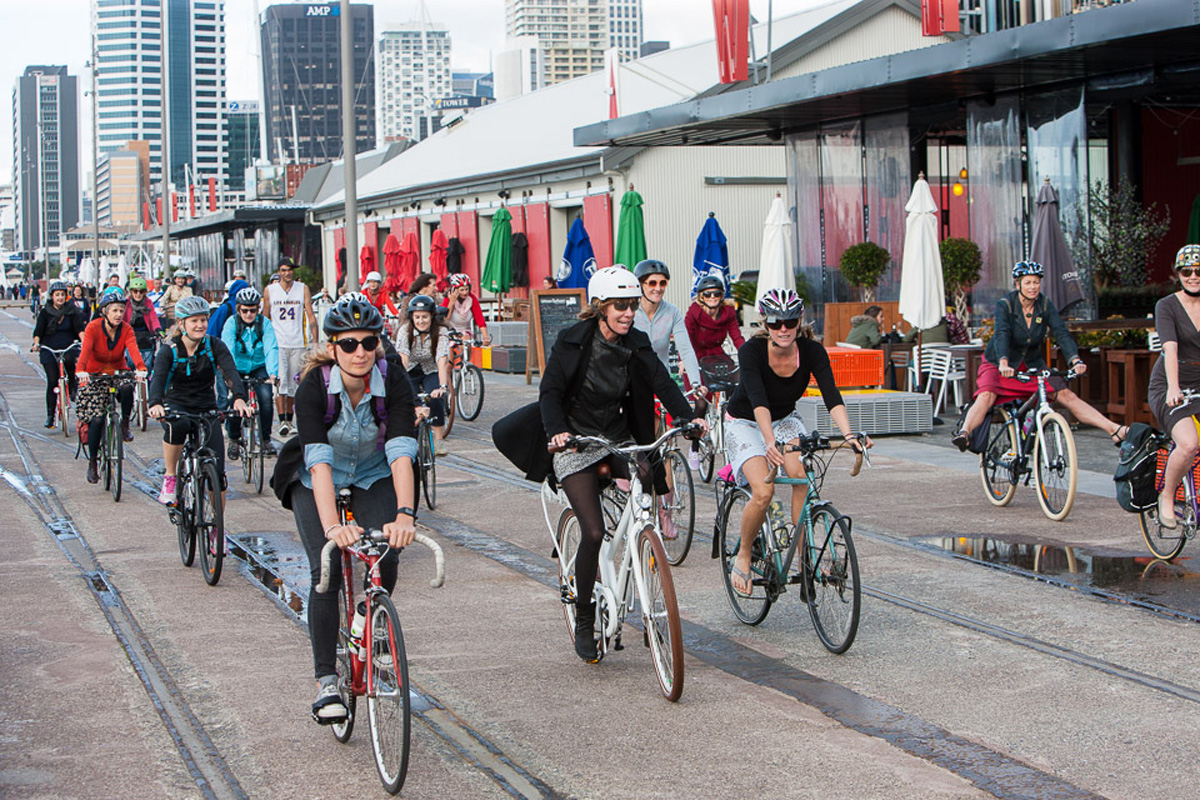 It’s never easy to effect culture change but NZ’s Frocks on Bikes are making cycling more appealing to women. And they’re doing it with something really simple–changing the dress code.

In some parts of the world, cycling is a feminine pursuit. Think chic Dutch mothers riding with one kid out front, one out the back, the shopping balanced between them. Think Parisian professionals, pedalling over cobblestones in crisply pressed trousers. Think Portland indie girls, rolling in dresses and Docs.

In New Zealand, this is not yet the case. Approximately two thirds of cycle commuters there are male, and Kiwi cycling remains overwhelmingly about sport, not transport.

Frocks on Bikes wants to change this, and it’s doing it one woman, on one bike, at a time.

The group began when four women met at a Green My Ride breakfast for cyclists at Wellington’s Frank Kitts Park in 2008. Leah Murphy, who often biked to her office job at the Energy Efficiency and Conservation Authority, was one of them.

“It stood out to us that we were the only ones in regular clothes,” she says. Almost everyone else was clad in lycra and high-vis vests, and the women wondered why cycling in everyday attire was so rare. Then they wondered what would happen if it wasn’t.

Frocks on Bikes was the result. The premise is simple: normalising cycle-wear will normalise cycling itself. The message? Cycling isn’t just for athletes. You can ride a bike to work, or to the movies, or to pick up kids, and your can do it in a skirt and heels, in skinny jeans or in slacks. There is no uniform.

They set out to start a different kind of cycling group. “We met and dreamed about how Frocks on Bikes could become a phenomenon. The logo and Facebook page were created, we got some promotional photos taken and we made up some ‘I *heart* Frocks on Bikes’ t-shirts for the boys,” Leah says.

Frocks on Bikes’ maiden event was part of Wellington’s 350 Climate Change Day of Action in 2008. More than 150 frocked-up riders put on a bike parade, and for a moment, Wellington could have passed for Copenhagen, except showing more leg.

Auckland joined in with its own 350 ride and after that, Leah says, it erupted. “Every few months someone would contact us wanting to start a flock,” she remembers. Currently there are 12 chapters, or “flocks”, across New Zealand, as well as one in Perth. Frocks on Bikes has also been invited to speak at the past two Velo-city conferences in Vienna and Adelaide.

They’ve grown quickly, and so has their message of mainstreaming of the bicycle, winning a widespread acceptance that has eluded other forms of cycling advocacy. The dresses help. According to Christchurch coordinator Meg Christie, who rides both as a fully kitted roadie and in regular clothing, frocks have a way of humanising cyclists to other road users.

“I feel safer riding in everyday clothes,” she says, explaining that drivers behave more respectfully when she is be-skirted, giving her extra room and slowing to pass.

Freed from strict definitions of what cyclists should do and be, each flock has developed a distinct regional vibe. Christchurch, for example, with its flat landscapes, is bike-mad (7 per cent of workers there cycle-commute, versus 2.9 per cent nationally) and Frocks taps into an already-busy cycling calendar.

They’ve joined in on everything from moonlight trail rides to a cargo bike rally to the Santa Parade, and held Frocks on Bikes events like a pedal-powered Op Shop crawl.

In Hawkes Bay, the Frockers celebrate the local Art Deco architectural tradition. Nicknamed the ‘Deco Bike Belles’, their rides always attract a crowd dressed like the cast of The Great Gatsby. And in Bay of Plenty, a popular retirement destination, the ridership consists of women of all ages, many in their fifties and sixties.

More than a few non-cyclists have been inspired by Frocks to get riding. Writer Emma Gilikson is one of them. She hadn’t really cycled since school and had never ridden in her current home of Wellington.

“I had written Wellington off as a too-hard place to cycle because of the hills and the traffic,” she says. Last February she borrowed a bike, popped on a summer dress and hit the Love to Roll event. The group ride helped her regain confidence on two-wheels.

“It wasn’t scary at all on the road surrounded by so many other people. It was fun,” she explains. Her partner bought her a crimson retro-styled Apollo for her birthday and one more happy Frocker was born.

Another supporter is American transport guru Janette Sadik-Khan, famous for her pro-velo makeover of New York during her six-year tenure as Department of Transportation Commissioner (including America’s largest bike share programme and nearly 600 kilometres of bike lanes). On a visit this year she joined the Auckland Frocks for a tour, tweeting post ride: “Frocks rule … Kiwi women riding for bike-friendly streets. You rock!” This is a good example of Frocks on Bikes’ “show, not tell” approach to activism. They do make submissions on cycling-related government initiatives, but they generally stay apolitical, leaving classic advocacy to groups like the Cycling Advocates Network. Frocks remains mainly about social events, confidence-building and discussion. Get more people riding, every day, and the political ends – carbon reduction, cycling infrastructure – will follow.

The politicians are listening. Auckland Mayor Len Brown has joined the Auckland Frockers more than once and his Wellington counterpart, Celia Wade-Brown, is a fan. “The approach of looking stylish and wearing ordinary attire – not lycra – connects well with the wider public,” she says. “Frocks on Bikes reminds people, especially women, that you can pretty much wear what you like on a bike. When I cycle now, I see more and more women cycling.”

A Wellington Regional Council report on cycling from 2001 to 2012 supports this. While men still ride more than women the document notes, “this gap has been closing.” Eleanor Meecham, a bicycle commuter and member of Cycle Aware Wellington, agrees.

“You only have to step out the door to see how many more women are riding bikes and the increase in cyclists at commuting times is really noticeable. Many are in their work clothes, heading to the office. It’s a whole culture change.”

For Leah, the proof came in an interaction with a road user of the kind once most feared by the cycle commuter, a bus driver. He pulled up next to her and leaned out to talk. “Are you part of Frocks on Bikes?” he asked. “You guys are great!” And with a friendly wave he drove away.