“Despite some initial teething problems and changes in the market, there’s still a strong demand for share bikes to get around Sydney,” said Lord Mayor Clover Moore.

“We still need users to make sure they are parking the bikes in the right spaces and using them in a safe and considerate way, but it’s clear they’ve become a useful transport solution for lots of Sydneysiders.”

Two share bike companies are now operating in Sydney: Mobike, which has been in market for the past year and new entry Lime, which introduced a fleet of electric bikes around three weeks ago.

“Sydney is one of our most active markets around the world,” said Mobike Head of International Operations Mark Lin.

“Since our launch 12 months ago, we have clocked over half a million rides and in some Sydney hotspots, bikes are turned over more than six times a day.”

“Our data shows people are riding Mobikes for short and long trips, for both weekday commuting and leisurely rides on the weekend.”

Mobike’s orange and white “new lite” bikes are especially popular in the city centre and in Green Square where buses and trains are struggling to meet demand in this fast growing area.

Since Lime e-bikes were launched, more than 30 000 trips have been recorded from the hilly eastern suburbs, through the city centre, to the inner west.

Around 1500 Lime bikes have been deployed, supported by a team that monitors and replaces batteries.

“We’ve been surprised by the rapid take-up, with nearly 9000 people signing up in our first two weeks in Sydney,” said William Peters, Lime’s Community Affairs Manager for Australia and New Zealand.

“The topography and climate here makes it ideal for e-bikes, which provide a little help uphills and when you’re getting a bit tired.”

“The average Lime ride is around 10 minutes or 2 kilometres. It’s a quick way of getting from A to B and getting some exercise along the way. We see an exciting future for e-bikes in Sydney.”

The city will soon trial bike share parking areas in six of the most popular share bike locations. As share bike use is expected to increase over the summer holidays, the new bike parking areas will highlight recommended areas where people can leave the bikes once they’ve finished their trip.

Share bikes should always be parked considerately, at or near existing bike racks or in a safe place, keeping footpaths and building walls clear for people walking or travelling along the street. 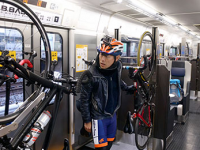 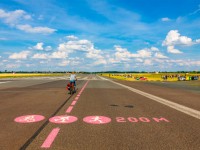 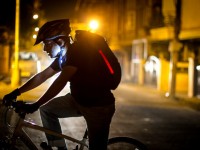