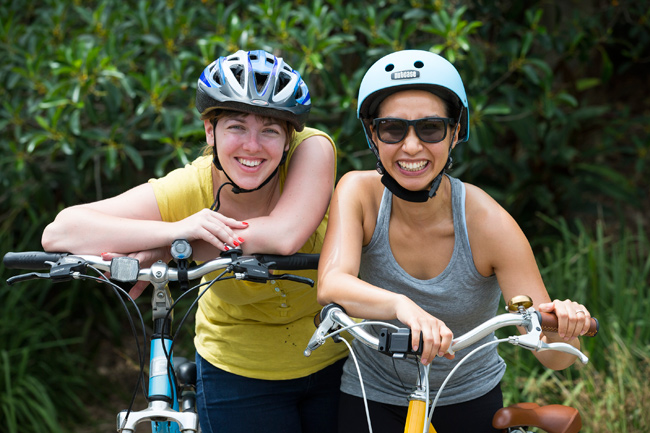 Free City of Sydney bike courses to build confidence and increase awareness of road rules are leading to a record number of graduates becoming regular, safe riders. New survey data shows 82 per cent of people who completed a free Cycling in the City course at Sydney Park Cycling Centre now ride regularly. That figure has more than tripled since the courses were launched in 2009.

The number of course participants who now ride to work has also tripled, from 7 per cent before a course to 25 per cent after.

Lord Mayor Clover Moore said the City was committed to supporting people who want to ride and giving them the skills and confidence to ride safely for health, fitness and transport.

“Bike trips have doubled since 2010, so it’s important Sydneysiders have the skills to safely enjoy the many benefits of riding,” the Lord Mayor said.

The Summer 2015 Cycling In the City survey interviewed people who took part in a course at the Sydney Park Cycling Centre between December 2014 and March 2015. The survey also showed:

Tracey Morris, 32, from Kingsford and Jessica Poole, 26, (pictured above) from St Peters took part in a Rusty Riders course earlier this year to build up their riding confidence and skills.

“As a kid, I never got off training wheels and as an adult I was just plain scared of falling off. But my husband rides a lot and that was my motivation,” said Tracey. “Work is a 10 minute ride away – I want to be able to ride to work and to the shops in my area. I also want to ride for health reasons, to get fresh air and exercise. I’ve bought a bike so the next step was the Cycling in the City Course to get me out on the cycleways.”

Jessica recently returned from a trip to Europe where she was inspired to take up riding again after 10 years. “There are more cycleways in Sydney now, so I feel more confident about riding. But I really wanted to brush up on my skills, like braking and riding with other cyclists and around traffic,” said Jessica.

“I have trouble fitting exercise into my day so, rather than sitting on a train and then dragging myself to the gym, I want to ride my bike to work to get fit and have control over my commute.”

round 500 people a year take part in one of the free training courses run for the City by Bikewise. The City offers three different Cycling in the City Courses every week. There are also weekend Balance Bike Clinics for kids and free bike maintenance courses.

For more information and to book a course, visit Sydneycycleways.net