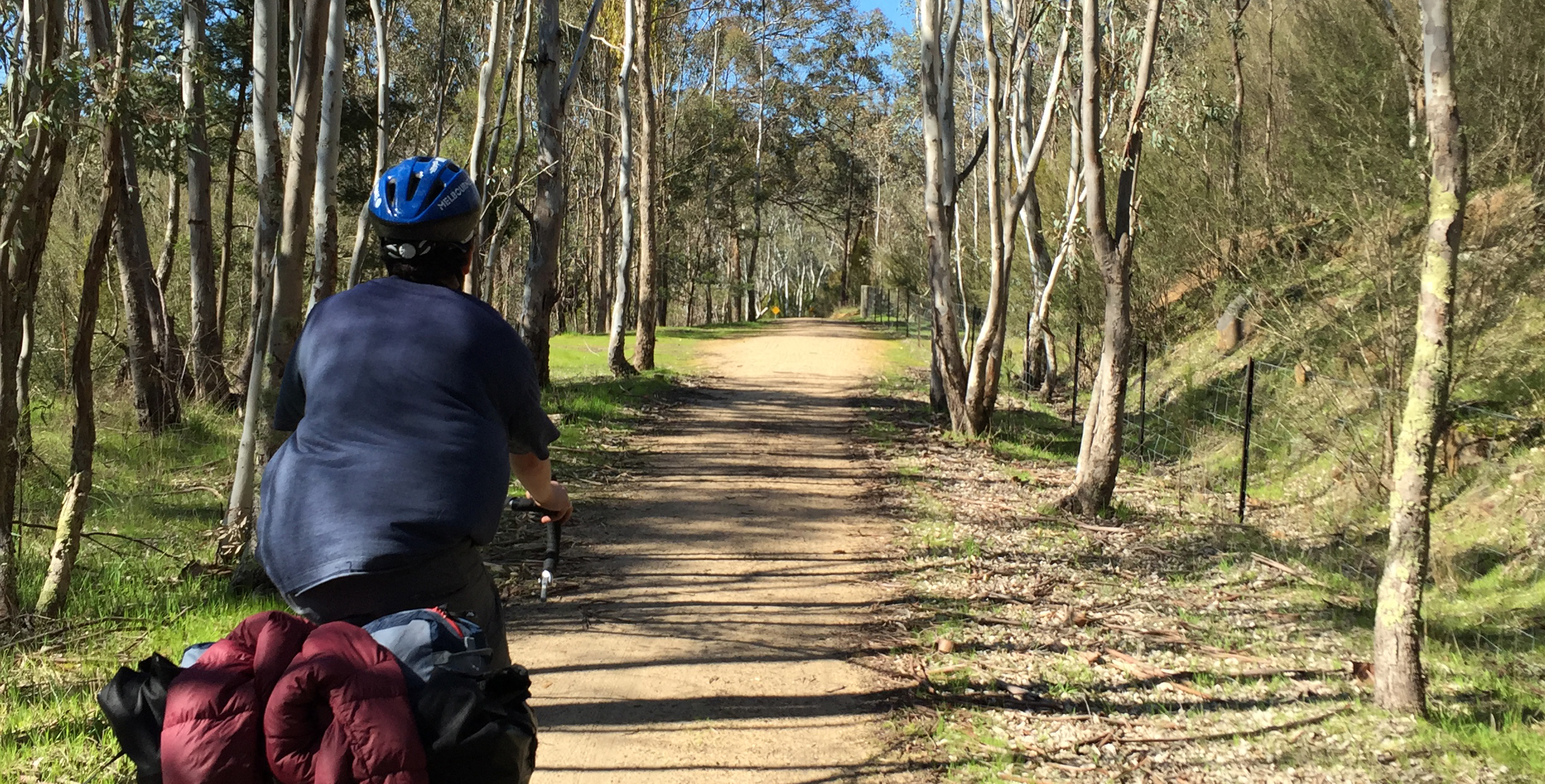 As we fly past the urban sprawl, there is a sense of eternity. I look out the train window enthralled, seeing the landscape change from quarter-acre blocks to grassy knolls. I’m sitting across from my friend, Jim, who snoozes in the glistening morning sun. “Tallarook!” is yelled by the conductor and so we alight. Bikes teeming with all camping necessities – trangia, tents and tea – we plan to take the Great Victorian Rail Trail towards Mansfield. The trail follows the curves and undulations of the valleys, its relatively steady gradient means the cobwebs on our bikes shouldn’t be a cause for worry. Well, at least I thought.

In the midst of preparing the camping necessities, I seemingly forgot the cycling essentials: tubes, tools and tyre irons. As Jim’s trusty steed exits the train, the back tyre blows. Jim, being Jim, also forgot the aforementioned equipment. Undefeated, we waited for the next train to Seymour and altered our plans. The day was getting on, so with tyre spinning, we hit the B340 highway and made it to Horseshoe Lagoon. As the sun sets, we forage for kindling and welcomed the night with a blazing fire. Rain started to fall as we went to bed, the rhythmical droplets lulling us to sleep. 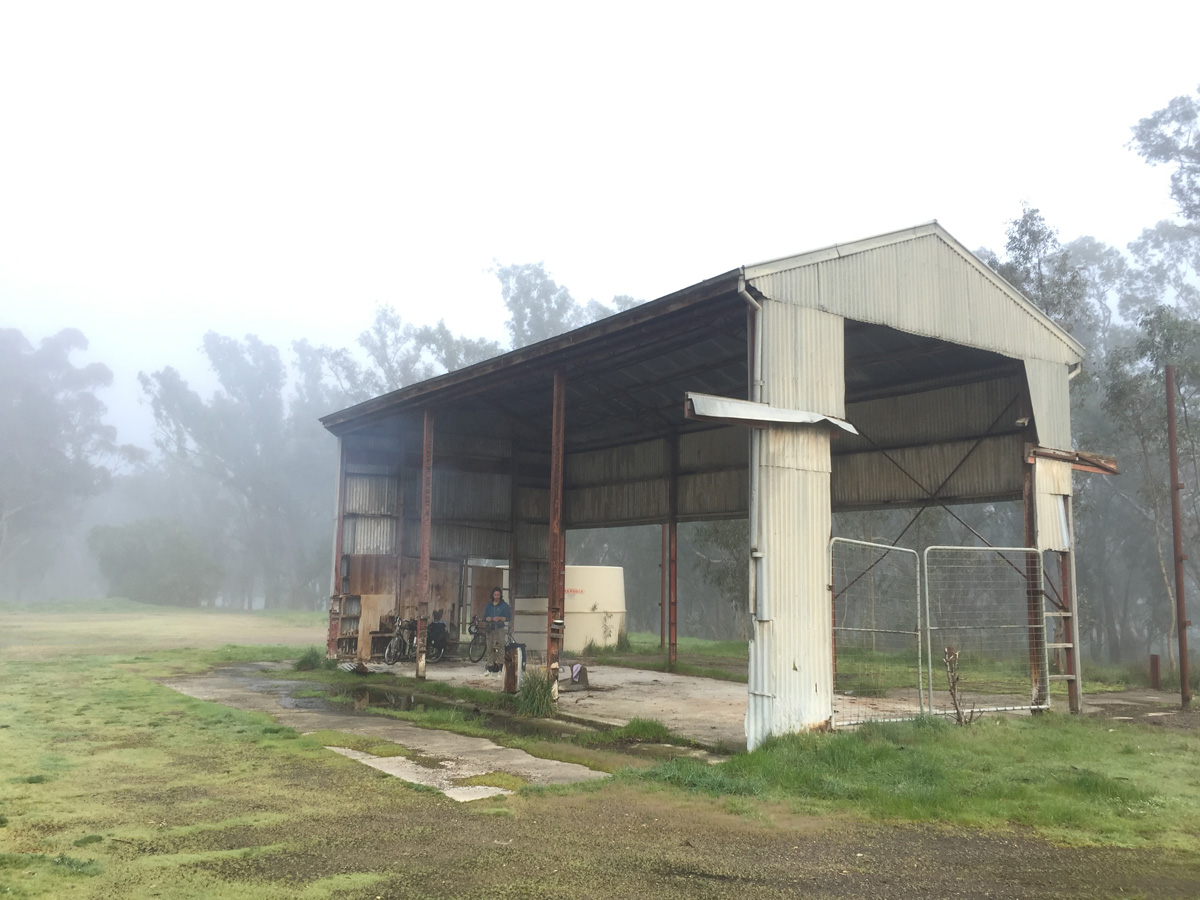 Jim was up first, as always, and showed a keenness to saddle up. His pestering prevailed and the campsite was hurriedly packed up. Finally, we were about to get on the trail and then crack – Jim’s chain breaks. Fortunately, Jim had borrowed a chain breaker from a friend, but we are certainly amateurs and so the battle began. The Siege of Horseshoe Lagoon saw tempers flare but cool heads prevail; after Youtube-ing, removing numerous chain links and placing Jim’s bike on first gear, we were off. Google Maps sent us to local man, Greg’s private farm, which Greg voiced his anger about. Despite this, after we exchanged pleasantries and told him about our morning and he insisted we take the chain off his bike, just in case.

With momentum, we careered along the gravel packed path in the beautiful spring sun. Then, Jim shoots me with a curious gaze and says: “What was that?” A black mass had zipped by me: it was a magpie. The next one hit me in the head – it was an ambush. We bolted, intermittently, along the trail, dodging the squawking maggies. Thankfully, the troublesome magpies would be quickly forgotten as the blossoming wattle arrested our senses. A quick pot (then pint) at Yea stood us in good stead to reach Cheviot (only 5 kilometres from Yea). Arriving later than planned, the ceremonious fire was lit and dinner was inhaled.

On our last day, we are to return to Tallarook. Everything seems to be working. Jim is powering on in first gear, I am cruising in second and we whip past Yea before 10am. And then the inevitable happens: Jim’s chain breaks. But all is fine, because Greg gave us his back up. But unfortunately, Jim has lost the master chain link for Greg’s chain. Applying MacGyver-like skills, we try to use two chains together (did I mention we are amateurs?). Three hours pass and the scene is one of blackened hands, a broken derailleur and an ever-shrinking chain (and patience). In a lucid state, we achieve reconnection and we’re rolling again, miraculously.

On the train home, we marvel at the difficulties we created for ourselves and yet begin to plan our next trip. The quarter-acre block is seen again and those pains melt into fond memories.