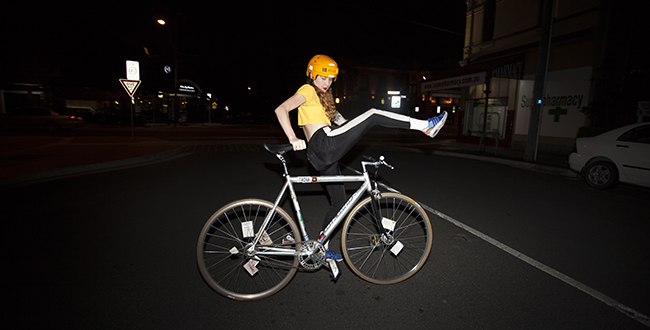 To Barwyn and Back is a new breed of cycling brand that hopes to inspire bicycle commuting and infrastructure through meaningful connections.

It began with a trike. Sometime in the early 90s, clad in nothing but undies and an “awesome sports jumper”, four-year-old Gemma Baxter hurtled towards freedom and crashed into a clothes horse instead. For some, this collision would have acted as a deterrent, but for Gemma it was just another day of hooning around on her three-wheeled steed.

These days, Gemma has a new relationship with her bike; the feeling of flying remains but it’s accompanied by a desire for perspective via pedal. It’s rare in adult life to find something that can transport you, literally and figuratively, to a place of play; moreover, the value of that experience isn’t always easy for others to comprehend – which was one of Gemma’s key motivations for creating a cycling brand that is a fashionable mix of enticing and aspirational.

Like most people, there was a gap between Gemma’s childhood biking exploits and her use of cycling as a main mode of transport. It wasn’t until she moved to Shanghai to complete a year of architectural practice experience that the connection was re-established. Already concerned with issues regarding urban density, public transport disconnectedness and city infrastructure, Gemma saw how influential cycling could be in both a personal and architectural context.

“I started by loaning bikes until, eventually, some mates built me one of my own. The bike afforded street connection, exploration, running into mates, always being (relatively) on time, and feeling autonomous in an overwhelming environment. Everyone rode in Shanghai. When I rode around on my bike, I found happiness in the freedom, adventure and excitement … just as I did as a kid,” says Baxter.

Some of the friends behind that first custom-build now run Shanghai-based bicycle brand Factory Five, whose motto of “built by riders, for riders” closely aligns with Gemma’s own design sensibilities. Throughout her education she closely examined urban issues and how bike riding can be a catalyst for big, positive change, which naturally lead to an investigation into current fashion products. “I wanted to nut out why some garments probably shouldn’t be worn on a bike, and conversely, which details and trends could be played with in the case of designing a ride-friendly garment,” explains Baxter.

Like architecture, her approach to starting a business was deeply rooted in problemsolving. Material limitations, budget constraints and the balancing act of form and function felt like a familiar process. And while some designers are skewed heavily on aesthetics and a total disregard for anything else, for Gemma it was about “injecting value through encouraging behavioural changes … [and] allowing the user access to something they previously couldn’t have.” It’s not hard to spot the divide between mainstream cycling culture and the trendy urban dweller. Firstly, many cycling brands cater to a certain degree of wealth that just isn’t accessible for most young people. Secondly, those brands don’t often produce the type of clothing that isn’t obviously cycling gear, let alone something that might be labeled as streetwear. This isn’t necessarily a bad thing, and it certainly has its place in the riding community, but To Barwyn and Back is all about filling that gap – romancing trendy kids into picking up a bike and noticing the benefits of cycle commuting through style.

“The lycra-clad cyclist can be a beautiful thing to behold, but in no way would it tempt a young urban dweller to commute to work, at least in my opinion,” says Baxter. “I wanted to bring to the table something [that was] fresh, injected with a bit of tech (anti-odour, quick-dry, water repellant, etc), so that people might start to consider the commute in a different way.”

Having little faith in the initiative of governments, Gemma hopes that by getting more bums on bikes, cycling infrastructure will be upgraded out of necessity, which will in turn reduce traffic congestion, emissions, and strains on public transport, as well as create more vibrant streetscapes.

“With fashion, you can make something quite radical quite affordably and measure its effect, whereas with architecture and urban planning there’s so much more money and risk. So I guess I’ll keep trying to influence people my way and hope it can ripple around and impact infrastructure,” laughs Baxter.

To Barwyn and Back’s first collection is, as Gemma puts it, “a bit of a mixed bag”, but that’s definitely a large part of its appeal. Creating colourful long-sleeve tops emblazoned with a large retroreflective logo and intricately designed riding gowns with a “pull-up” function for cycling, Baxter has already altered my perception of the possibilities of riding fashion. After taking a closer look, there’s no doubt in my mind that others will feel the same.