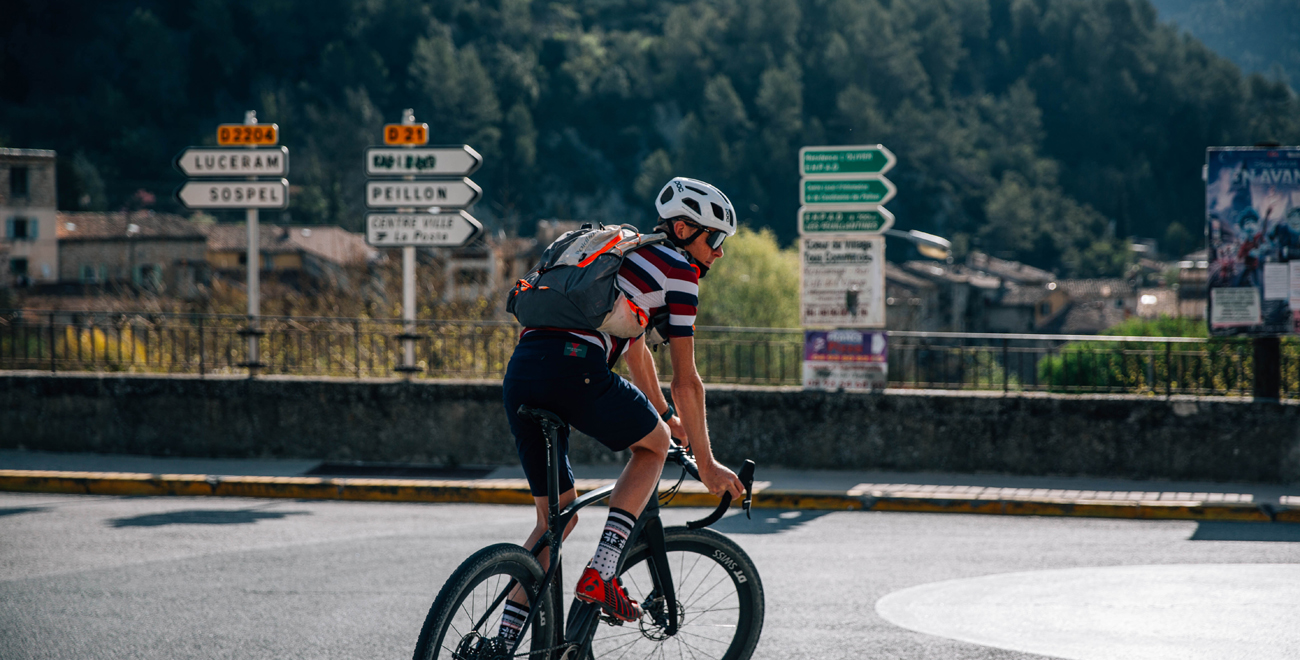 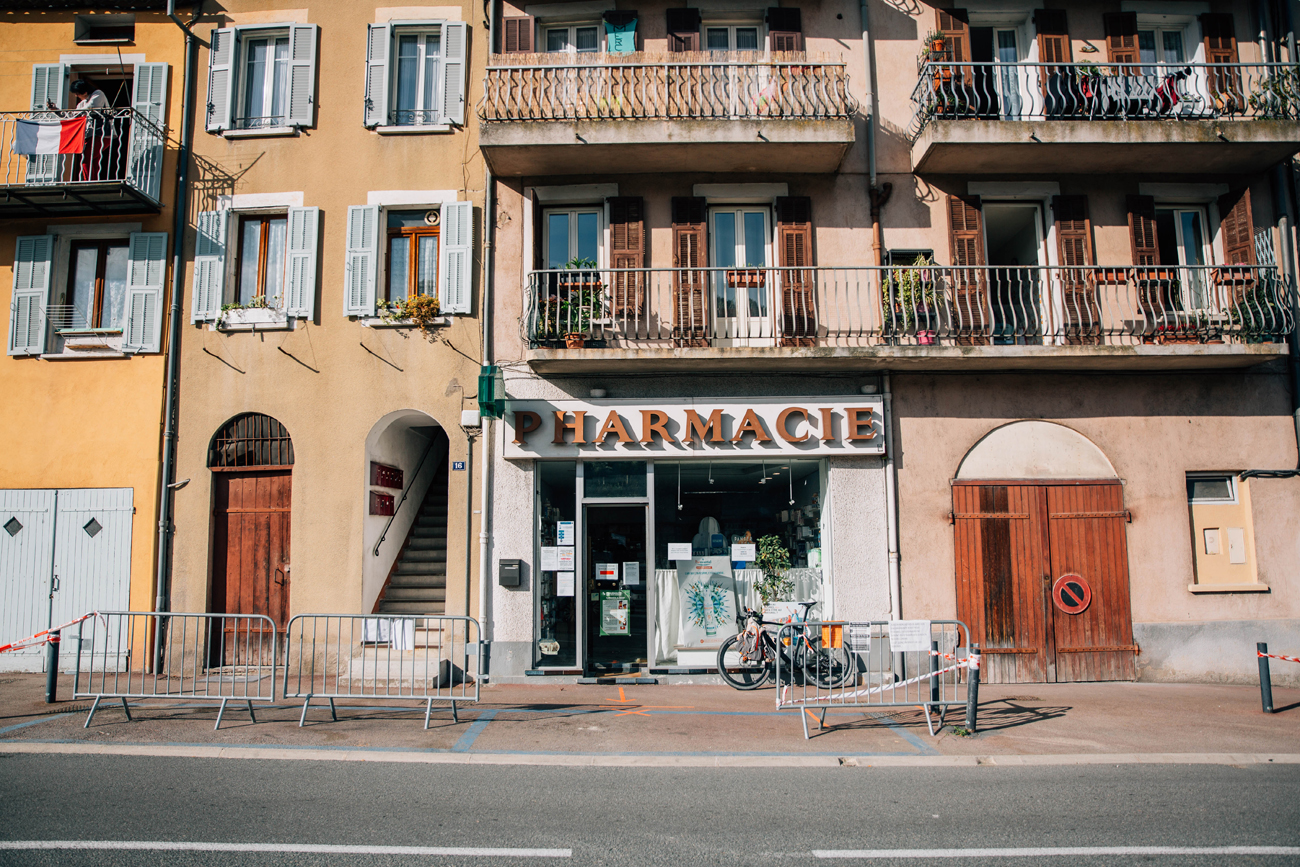 There are always positive stories to illuminate the world during bad times. Like the car companies making ventilators for hospitals, a world ‘hack-a-thon’ to solve supply shortages, even famous musicians broadcasting live shows from their living-rooms. Every little bit helps.

Last week, a Whatsapp notification for Kong Fufu, aka Cedrick Dubois, showed up on-screen. His local pharmacist, Thibault, had asked if Cedrick would be willing to be part of a medical delivery service for the elderly, the vulnerable and the isolated patients in the area surrounding L’Escarène, 21 kilometres north of Nice. There was only one answer.

We join Cedrick outside the pharmacy, waiting for the patient being served inside to exit. Thibault is obviously a man with a sense of humour: there’s a sign on the door which warns pensioners to stay out and, if possible, send their younger family members – preferably females between the ages of 24 and 30 …

Entering the pharmacy, you find the visible references to the invisible enemy that the we are facing. Thibault is wearing a mask and is behind the counter which sports those high, see-through plastic shields that prevent droplets passing between us. His colleagues are in the back room preparing prescriptions. It may not be an apocalyptic hospital scene, but it’s part of the front line and the truth is the drugs in this pharmacy to be delivered to the people that need them will save lives.

The pharmacy serves clients spread out in valleys, crevices and lower peaks of the Alpes-Maritimes, in the small hamlets or out on their own, totally separate from civilisation. Sometimes up gravel roads. That is to say, roads which are deemed too risky to drive on at the current time.

Thibault, like Cedrick, is a trail runner and a cyclist and so has an acute awareness of the topography of the region. Being aware of Cedrick’s in-depth knowledge of all the available routes, and his ability to cover ground so quickly, Thibault knew he could help. This is riding with purpose.

Today there is only one delivery to a patient in Peille who suffers from a respiratory disease and therefore is a very high-risk profile. Compared to yesterday, this is an easy task: “In a single session of three hours I was able to go to seven people, making a tour of 70 kilometres with an elevation gain of 2000 metres,” says Cedrick. The biggest surprise was a delivery to the castle on Col de Braus (indeed, there is a castle on the Col de Braus, just to the left after the steep pitch that follows the famous switchbacks).

Cedrick picks a low-profile road that connects L’Escarène to Peille. The Route de Très that leads to the Route du Col des Banquettes is a lesser-known local favourite that runs in between the peaks at the back (north-side) of the Col de la Madone. From L’Esacarène the road climbs from the valley via switchbacks under a pine tree canopy, plateaus through an olive grove before repeating itself up more switchbacks and then eventually descends on a cliff-hanger that could be mistaken for the Madone itself. In total, it’s about a 45-minute ride that spits itself out on the last two hairpins of the Côte de Peille.

Peille is a quiet town at the best of times. Today, you could hear a pin drop. We arrive, traverse the upper limits and exit via a super steep lane out the back of the town. These are the cul-de-sacs that serve the satellite houses of the village. At the top, horizontal bands in the concrete surface mean only one thing – gradients in excess of 10, but often at 15 per cent.

The end of the chemin is our destination, a reminder of the predicament we are in. Cedrick discards a €7000 gravel bike in the hedgerow at the side of the road as if it’s a worthless commuter and takes off his backpack. He’s focused. Thibault had been very clear about the delivery process. Take the package, place it at the front of the property and go no further. Then step back at least five metres before anyone appears, otherwise we may be hindering rather than helping.

A husband and wife emerge from their mid-altitude Alpes-Maritimes retreat. They are friendly but cautious and, of course, masked. He asks if the bike is electric, because the road up is crazy steep. He doesn’t know Kong Fufu. She stands behind, nervous and also masked; she’s had a lung-infection recently. The main concern is how to pay for the prescription. Cedrick says that is not a concern, Thibault has it worked out.

Comme ça, the job is done. It’s an interaction which, because of its required brevity, seems inconsequential. Cedrick won’t know the ‘before and after’ of this delivery. Instead, he’ll ride home and tomorrow he’ll go back to the pharmacy and collect more packages. That’s what needs to be done. His bike has returned to what its predecessors once were – a tool of ultimate function – and one that is helping in its own small way.