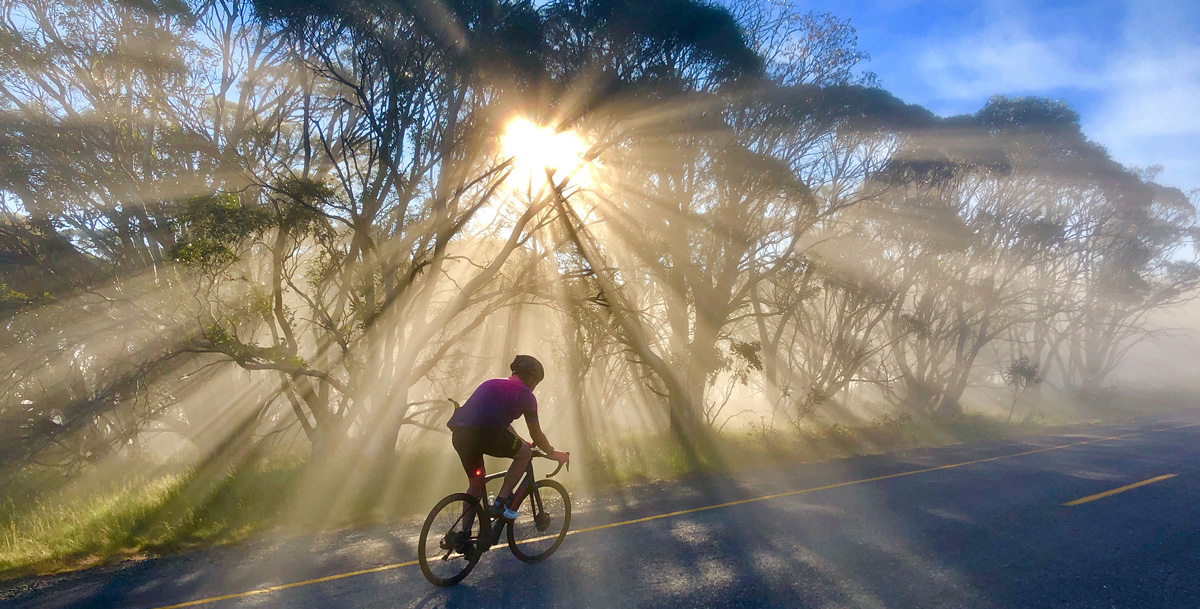 Tranquility and motion are considered amongst the High Country’s greatest cycling assets. Announcing Fiona O’Callaghan as winner of Victoria’s inaugural Ride High Country Photo Competition, judges were captivated with how her work ‘Living the Dream’ subtly captured this spirit.

Ms O’Callaghan, from Berwick on the outskirts of Melbourne, will become a Ride High Country Ambassador for the 2019 – 2020 cycling season, and her photo and name will feature, larger than life, on a billboard display in the Melbourne CBD.

Over 200 images were submitted to the competition, capturing every aspect of cycling in Victoria’s premier cycling destination, the High Country.

“It felt peaceful and serene in the clouds, a good omen that we would complete the Ride High Country 7 Peaks challenge”, said Ms O’Callaghan, describing the day the image was taken.

“It was the last peak for me, number seven, Omeo to Dinner Plain. I thought the light was beautiful, shining through the fog and clouds between the snow gums.”

Fiona credited her win to the subject of her work, Eric Caesar, who encouraged her to submit her single entry, saying, “Eric is an inspirational, adventurous, generous of spirit and determination, kind of cyclist and friend who isn’t afraid to try cycling in different parts of the world”.

In congratulating Fiona, Matthew White, Marketing Manager, Tourism North East said he was looking forward to working with Ms O’Callaghan as an ambassador, and promoting her photo in campaigns.

“We thought the photo really embodied the spirit of riding in the High Country and can’t wait to feature it. We know the response is going to be incredible.”

Victoria’s Ride High Country – 7 Peaks is an at-your-own pace cycling challenge which runs annually from October – April each year, encouraging riders to tackle one, some, or even all, of the seven challenging Victorian Alpine Resorts road climbs to go in the draw to win amazing prizes.