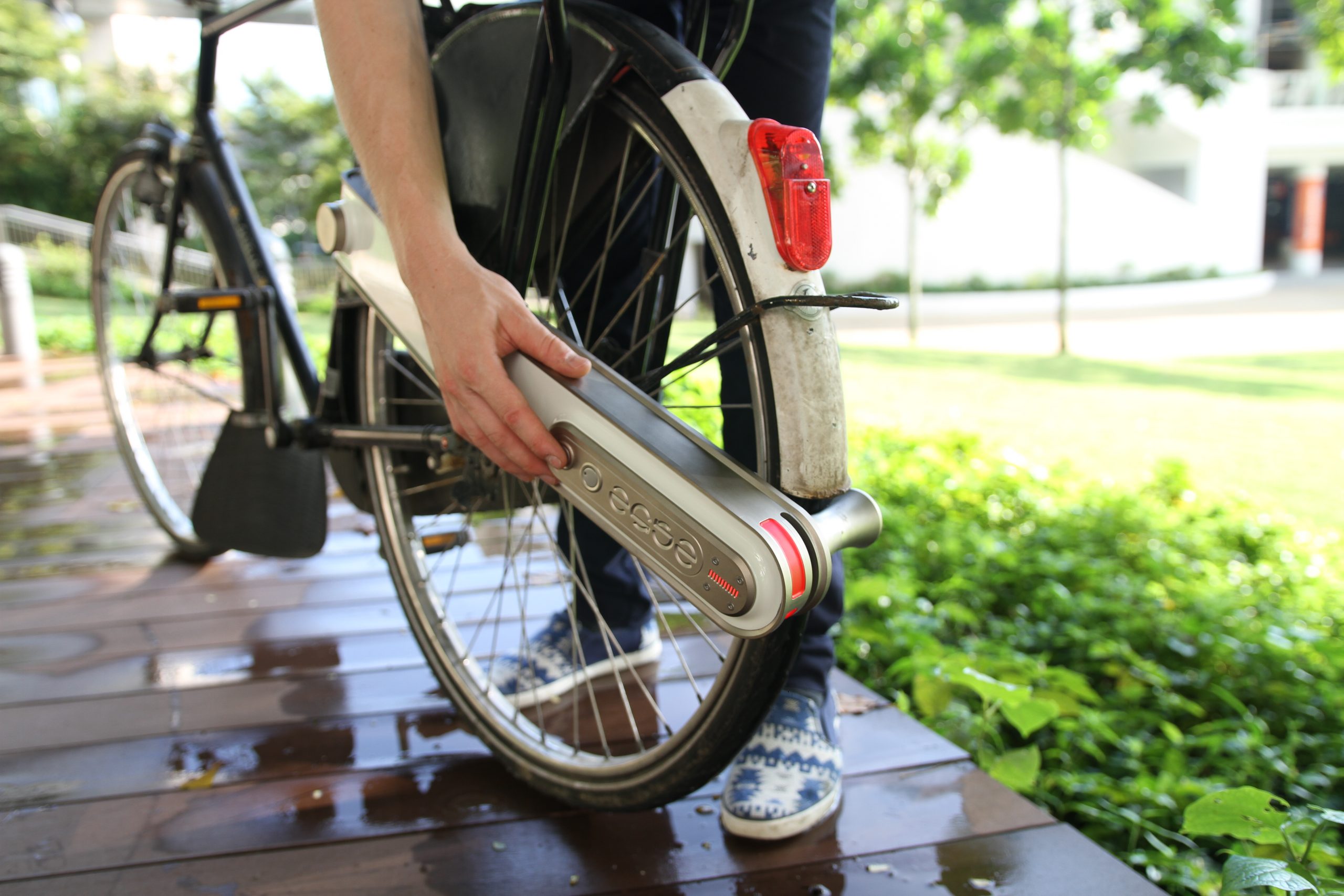 Engineers at TUMCREATE in Singapore have developed an electric motor which can be easily attached to almost any bicycle, turning it into a pedelec (pedal electric cycle). The drive device is so light that it can be taken along easily before and after use. The TUMCREATE researchers have already tested an initial prototype of their product, which they’ve dubbed “ease”.

Commuting to work by bike is particularly common in major cities. This can turn into a strenuous undertaking, depending on the weather, the route travelled and the individual’s mood. When the ride gets difficult, many cyclists might wish they had the help of an electric motor. But the high price of a conventional pedelec is an obstacle for many riders who might not want to simply lock up such an expensive bike on the street.

Felix Römer is a doctoral candidate at Singapore’s TUMCREATE, a research facility run jointly by TUM and Nanyang Technological University (NTU). Almost every day he rides his bike to the next subway station, where he continues his commute to work. Riding a bicycle in Singapore’s hot and humid climate is not always pleasant. This gave Römer the idea of developing a flexible electric motor that can easily be attached to any bicycle.

Many components in a single housing:

“There have already been several attempts to do something similar, but most of them require modification of the bicycle,” Römer says. “The effort involved discourages many potential users.” Furthermore, these units often only fit specific bicycles or wheel rims. This led Römer and Master’s students Marius Mrosek and Simon Schmalfuss to develop a completely self-contained device.

The largest challenge the team faced was fitting the necessary components such as the motor, storage battery and sensors into a single compact housing. “For example, we need optical sensors that detect when the pedals are being pushed,” says Römer. Most pedelecs feature these sensors permanently installed in the bicycle’s bottom bracket. “It took quite a lot of time and trouble to get everything to work properly without cables or additional equipment.” In addition, legal regulations for pedelecs require the ability to detect the movement of the pedals. In legal terms, pedelecs considered equivalent to bicycles and can be operated without insurance indicators, registration or a driver’s license.

The device features a lithium storage battery enabling a range of up to 50 kilometers, depending on performance requirements, and which recharges in only a few hours. The motor is capable of generating 250 watts and automatically switches off when the bicycle’s speed reaches 25 kilometers per hour. These aspects are also required by law.

Mounted in under ten seconds:

The engineers have already developed a functional prototype that weighs 3.5 kilograms and can be folded at a joint in the middle. The cyclist can easily carry the unit in a backpack.

It can be fastened to the bicycle using a cable loop which is hooked onto the frame and attached with a rotating knob – in under ten seconds. “Nothing stays on the bicycle after the unit has been removed,” says Römer. The scientists spent a long time tinkering with the unit before they came up with a design that fits various differently shaped bike frames. It can be mounted with equal ease on either side of the bicycle. The device automatically detects the side on which it has been installed.

Römer doesn’t consider the “ease” to be in direct competition with conventional pedelecs. “Our product is suitable for those whose daily commute to work is too long for a bicycle, but for whom buying an expensive Pedelec capable of longer ranges isn’t practical.”

The team is already working on improvements. “After the first tests we received feedback indicating that some riders bumped into the unit with their shoes,” says Römer. The initial mistakes have been corrected and the unit has been optimized. The scientists are hoping for support from an industry partner for further developments. Only then, they point out, will it be possible to estimate how much the “ease” will cost. The scientists have already applied for a patent for their invention.