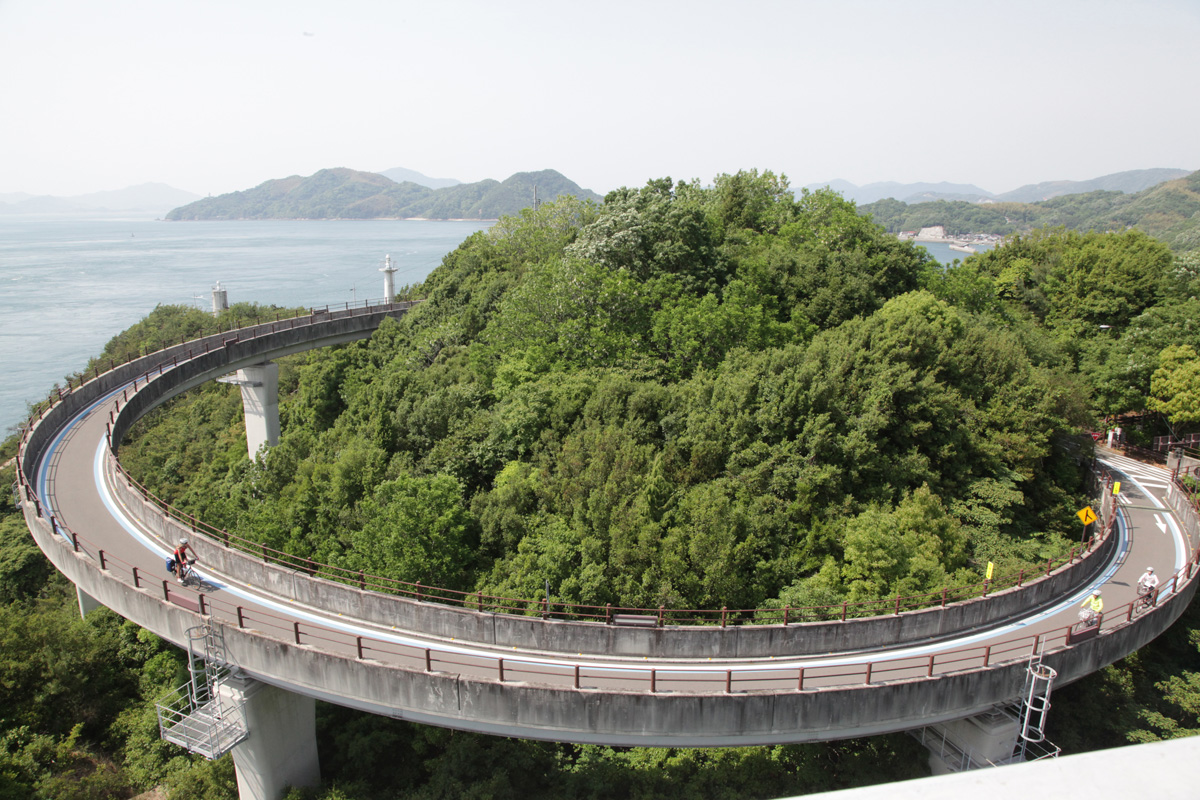 A seaside ride along Japan’s Seto Inland Sea proves that sometimes it’s the most unlikely factors that contribute to the perfect cycling trip.

I am standing in a long, light white tunnel with nautical mosaics on the walls. No cars or lorries are allowed in here. It’s for cyclists and walkers only. I am so delighted, I sing; the acoustics, predictably, are perfect.

A weird dream? Well no – except that cycling around the coast of Shikoku in Japan, over the Shimanami Kaido cyleway and onto Hiroshima almost, is the stuff of dreams.

In 1200 kilometres we barely had to leave a smooth, coast-hugging, traffic-free cycleway (or tunnel), and when we did the 50-kilometre-per-hour speed limit meant it wasn’t an issue. The 70-kilometre Shimanaimi Kaido, which took us over six islands of outstanding natural beauty in the Seto Inland Sea, saw us pedalling through fields of flowers one minute and onto a engineering marvel of a bridge the next.

Even the city of Hiroshima loves cyclists – they call them Peacecles.

I’d never thought of Japan as a cycling mecca but with a population of 126 million and car parking at a premium, everyone of every age and demographic cycles. The wide pavements are there to share and the famous Japanese politeness ensures no altercations between pedestrian and pedaller.

We began our trip by flying into Osaka, putting bagged bikes onto a bus to Wakayama before catching a ferry to Tokushima on Shikoku, the smallest and least populated of Japan’s four main islands.

Shikoku is the home of the Henro, a 1500-kilometre pilgrimage around 88 Shingon Buddhist temples, so for much of the ride we shared the pilgrims’ walkways. For the first three days we cycled past surf beaches and paddy fields, before arriving in the city of Kochi. We then headed out towards the Shimanto River, a pristine waterway also known as the last clear stream of Japan. It’s considered a mecca for cycling because there are few hills and it’s incredibly beautiful. That second claim is true.

We took the Nanako Pass, the highest point on the pilgrimage with a 600-kilometre climb. It was the only big hill of the trip, but the views made it worth the effort and refuelling was easy with 24-hour “kombinis” or convenience stores offering decent coffee and food (and free Wifi).

We stayed in a mix of guest houses, business hotels and Airbnbs, spending our night by the river with Aussie expat, Rosie Amemiya, who has made her home there teaching English and growing organic rice. 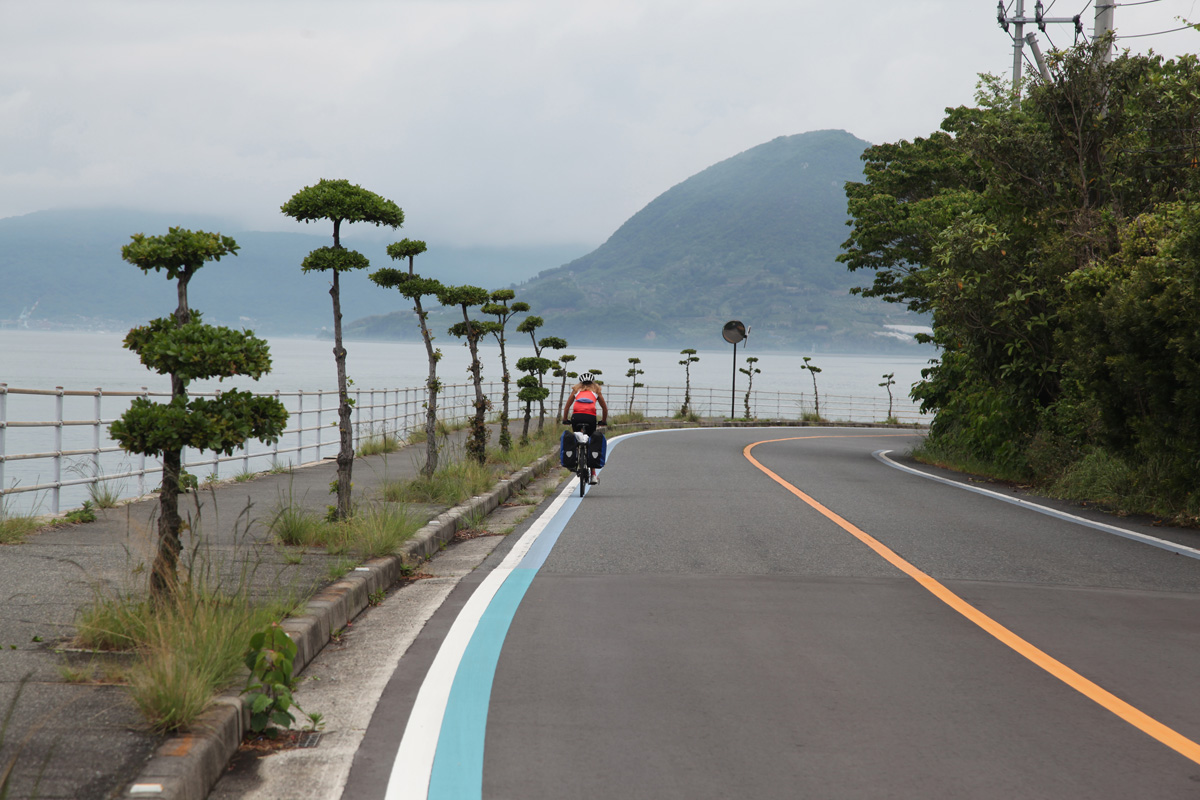 It was Rosie who recommended we visit the surf beach of Irino next day to see 1800 individually designed t-shirts strung on giant washing lines across the sand for an annual design competition.

Why on a beach? The beach is nature’s art gallery, the organisers explained.

This ride kept just kept getting better. We stopped off at Ohki beach to body surf before cycling around the subtropical national park on Ashizuri Cape which, with its lighthouses and lookouts, is like a crowd-free Great Ocean Road on steroids.

The clear azure waters continued at neighbouring Tatsukushi, a diver’s paradise with 1000 species of fish. Meanwhile the leg from the port of Sukomo to Ainan went straight into our top ten rides ever.

Reaching Imabari, the start of the Shimanami Kaido, we encountered a different type of spectacular as we pedalled the gentle looping incline onto the Kurushima-Kaikyō Bridge, stopping constantly for photos of the architecture, islands, boats and sunsets.

In July and August it’s apparently packed – visitors often renting Giant bikes at either end of the cycleway and sending luggage on ahead. In May, however, conditions and weather were perfect. Not wanting to rush we spent three nights staying on the various islands enjoying extravagant temples, white and weird marble mountain sculptures, hot springs, and the local citrus specialities.

Arriving at Onomichi it was a little dispiriting to exchange our bikes for our bags, but the train ride to the old naval city of Kure made up for it. The Setouchi Marine View comes with portholes, maps, lifesaving buoys and a giant compass – the train runs so close to the Seto Inland Sea you can share its delusion that it’s a ship.

From Kure, it was another stunning, coast-hugging pedal to Mitaka to catch the ferry to Hiroshima.

Hiroshima itself is famous for its Peace Memorial Museum, a visit to which will leave you shaking your head at the wickedness of nuclear weapons. But, in a country renowned for anime you may be surprised by the art galleries, featuring major works by European big-hitters from Monet to Matisse. 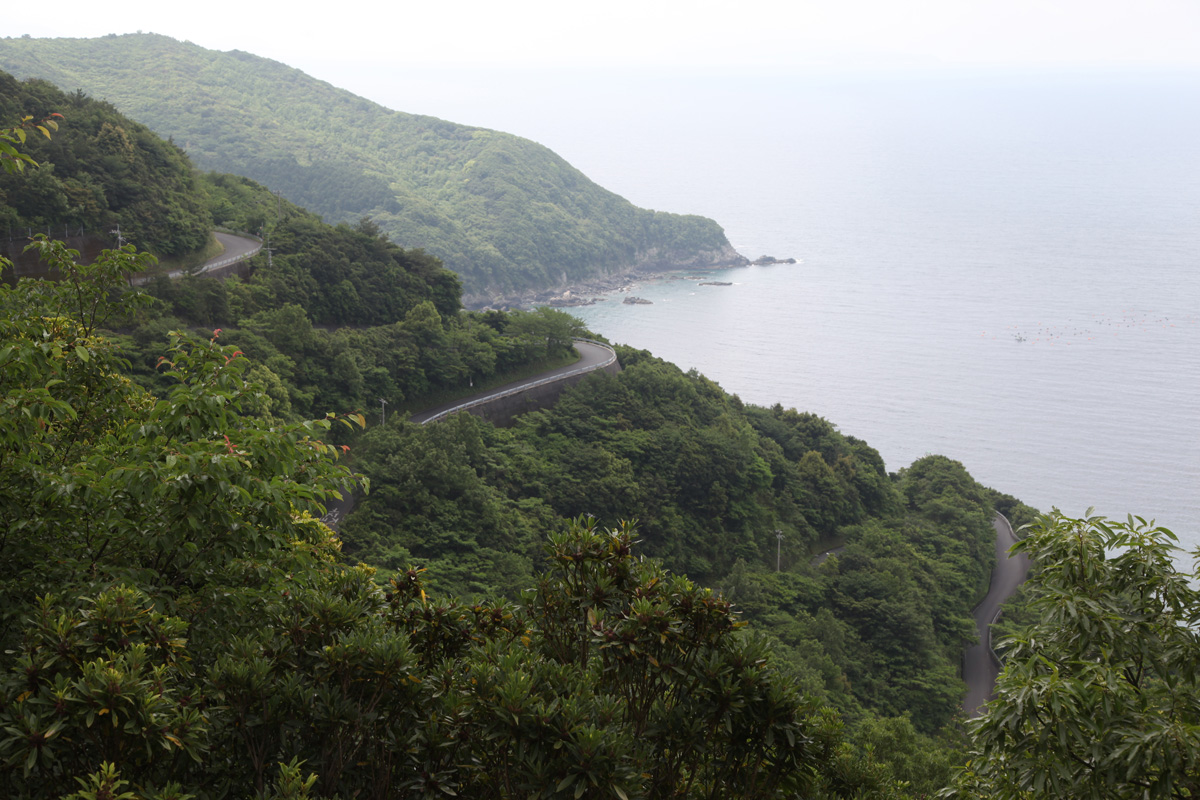 Another must-see excursion is Miyajima which, with its famous vermillion floating shrine, is considered one of the three most beautiful scenic spots in Japan. We eschewed the cable car to walk to the summit of Mount Misen for 360-degree views over the islands we’d just cycled across before visiting the Daisho-in temple complex. Inside of which you can offer a prayer to 88 different Buddhas, each representing the temples of the Shikoku Henro. This, apparently, gives as many blessings as the pilgrims get trudging the 1500 kilometres.

If I hadn’t had a plane to catch, I’d have happily cycled back to let them know there was a blister-free route to enlightenment.