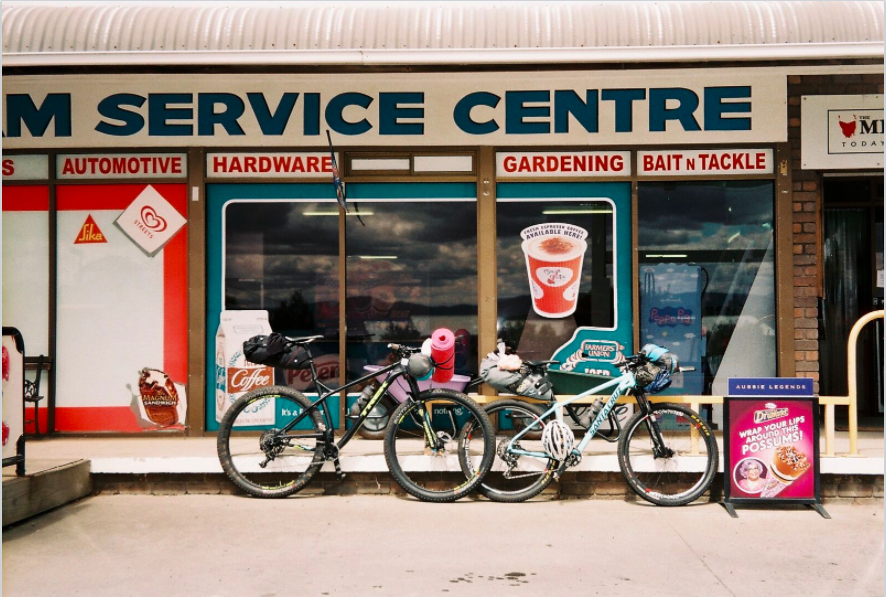 A cross between mountain bike riding and touring, bikepacking can take the adventurer to the middle of nowhere.

When explorers Burke and Wills left Melbourne in 1860 in their attempt to reach the north coast of Australia through the interior, they took 19 blokes, 23 horses, 6 wagons, 26 camels and 2 tonnes of gear. More than a year later they hadn’t returned.

By contrast, John McDouall Stuart took just nine blokes and nine months to reach the Top End and back. No one died.  Such light and fast thinking is behind a new style of bicycle touring known as “bikepacking”.

You take elements of bike touring and mix them up with mountain bike riding to come up with off-road, lightweight touring.

“It’s really a sub-genre of a sub-genre,” says Will Hartnett, who recently made the dash from Alice Springs to Adelaide, taking trails less well travelled than the highway now named after Stuart’s expedition.

“It’s a more adventurous style of bike touring. You can turn what might have been a series of day trips on your mountain bike into a three-day, five-day, ten-day mountain bike trip. The emphasis is a bit more on getting off the beaten track.”

He took a Surly ECR, a bulletproof mountain bike and accessorised it with freeze-dried food, lightweight camping gear and 10 litres of water.

“You’re using bags that strap onto certain parts of the frame as opposed to having panniers hanging off a pack-rack,” says Will.

“The end result is a much lighter set-up and the lighter the bike, the faster you can go. I looked at the trip and thought the more you take it becomes exponentially slower, then you have to add a heap of water.

“Most people who go traditional touring in the desert have to take 25 litres of water and therefore they’ve got so much stuff with them they only do 50 km a day.”

By contrast Will pushed through more than 100 km a day to do 1800 km in just 13 days. Stuart would have been impressed.

Will says one of the most stunning parts of the trip was being on the salt-flats of Lake Eyre with not another soul around.

“It’s an overwhelming place. It’s flat as far as you can see. I’ve never seen the stars so vivid. The white reflection off the salt lake makes it feel otherworldly.

“I looked at the map and zoomed out and went ‘Wow I’m at about the most remote place I’ve ever been. And I got here on my bike.’”

He says bikepacking is gaining interest globally as technology improves to allow streamlined set-ups. There are now official bikepacking single-track routes stretching hundreds of kilometres opening up in the USA.

The competitive element of mountain bike riding is also carrying over to bikepacking, with new adventure races taking registrations. A race to the Uluru, races around the Victorian Goldfields and challenges through outback NSW are all on the cards.

Jackie Bernardi was one of the earliest entrants in a race that went into the forests around Canberra for several days.

Despite fondly remembering being so exhausted she lapsed into delirium on arriving into Jindabyne, she chose a less competitive option when she tackled the Top End with her partner in July. Over 10 days, they rode 1100 km from Cairns to Cape York, in some parts using the old telegraph route.

“Up the telegraph track, which is a proper four-wheel-drive section, that’s where things got a lot sandier and a lot more interesting. At that point I enjoyed the more challenging riding as opposed to being on the open flats.” Jackie says.

They stopped at roadhouses for big feeds and camped with lightweight gear along the way. With one tent to share and only one spare change of clothes, they stripped back their requirements to the bare essentials. They even had a protracted discussion about whether bread was too bulky to be included.

“You have to pay a bit of attention to trim down the amount of things you’re carrying to travel faster and reach your distance goals. That is a side of it I quite like.

“There’s a reason we only took a couple of changes of clothes. We probably could have pulled a little trailer but it’s just more stuff. And there’s something quite nice about ditching all the extras and just going with the clothes on your back.”

Even beloved coffee was sacrificed in the quest to drop grams. “It’s amazing how good freeze-dried coffee tastes when you don’t have access to espresso,” she enthuses.

Watching turtles bobbing off the rocks at Cape York with a cider and a bag of chips was the reward for their efforts. That is, if the ride wasn’t the reward in itself.

“It’s actually quite relaxing to wake up in the morning and all that needs to be done is pack up and ride,” says Jackie.

“You can look at scenery, which is constantly changing. There’s no housework. There’s nothing else that needs to be done.”

This article originally appeared in issue 18 of Treadlie