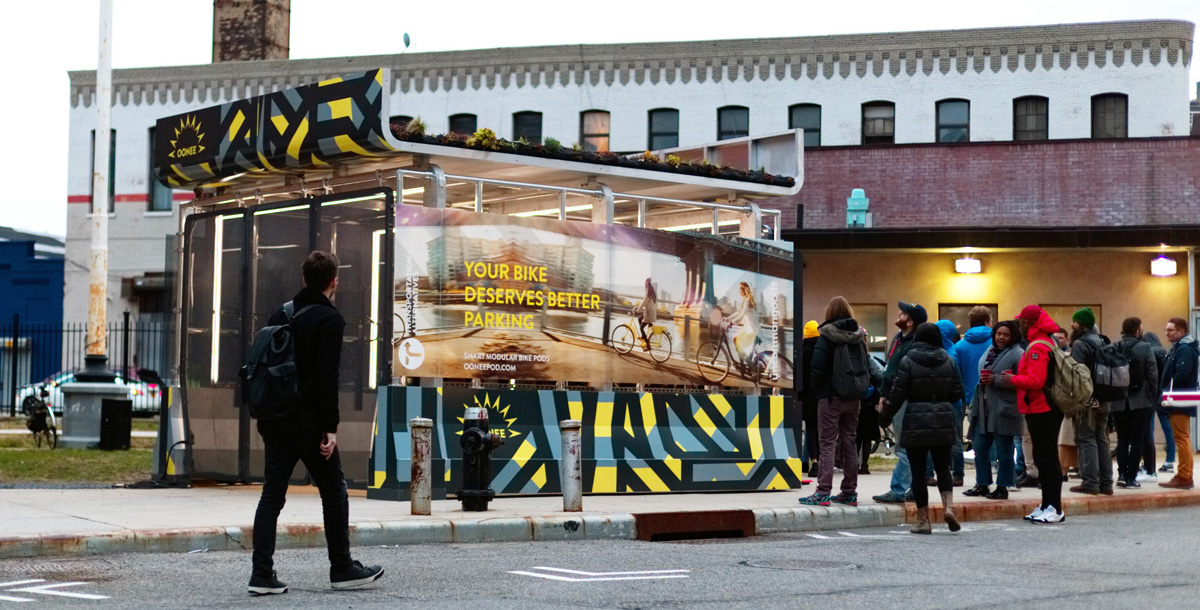 “Typically, to be a cyclist in New York City, you had to be like a road warrior,” notes Shabazz Stuart, founder & CEO of startup, Oonee. Certainly, as a local cyclist he had suffered multiple casualties: the theft of three bikes in a five-year period had left its mark.

“I realised I could never rely on my bicycle for transportation if I couldn’t know for a fact that it would be there,” Shabazz explains. With this obstacle in mind, he approached Manuel Mansylla (co-founder and Creative Director). “[I] said: ‘We need to design a nice-looking bike cage.'” To which Manuel replied: “Let’s stop calling it a cage. Let’s call it a pod.” And thus, Oonee was born.

Named after the Japanese word for a sea urchin, Oonee is a modular, customisable pod that provides secure parking for scooters and bicycles as well as public space amenities. Built from a kit of more than 150 parts, the mostly aluminium structure uses water-filled barricades or Jersey barriers as a foundation and can be made in a variety of sizes, colours and configurations. “[The] aluminium structure … [is] a skin that is basically designed to do two things: one is obviously to keep all the bikes inside safe. Two: for it to be able to take sponsorship in an easy and user-friendly way,” details Manuel.

Media sponsorship and advertising is the cornerstone of Oonee’s commercial viability. Shabazz and Manuel looked to bus shelters for inspiration and decided that instead of charging their users more, they’d use the surface of the Oonee (and its prominent location) as a business opportunity to offset costs. “The revenue stream from media is more than enough to help build and maintain the individual pods and scale the network,” Shabazz adds.

Security is naturally a priority for this type of infrastructure. Cyclists using the pods can rest assured that their vehicle is in safe hands: Oonees come equipped with an access control system that also delivers environmental data and video surveillance. Self-locking bike racks are also in the pipeline.

So far, one Oonee has been built in Downtown Manhattan and the feedback has been overwhelmingly positive. This bodes very well, explains Shabazz with a laugh: “New York is the kind of city where if you get five people in a room, you probably get like 125 complaints. It’s remarkable because Oonee has gotten no complaints!”

The Oonee team is expanding its network domestically and hopes to one day branch out internationally. “Our desire is to work with a city somewhere in the world … that wants to do a large placement of these pods at once,” Shabazz explains. Manuel chimes in: “Let’s work on bringing Oonee to Australia!”