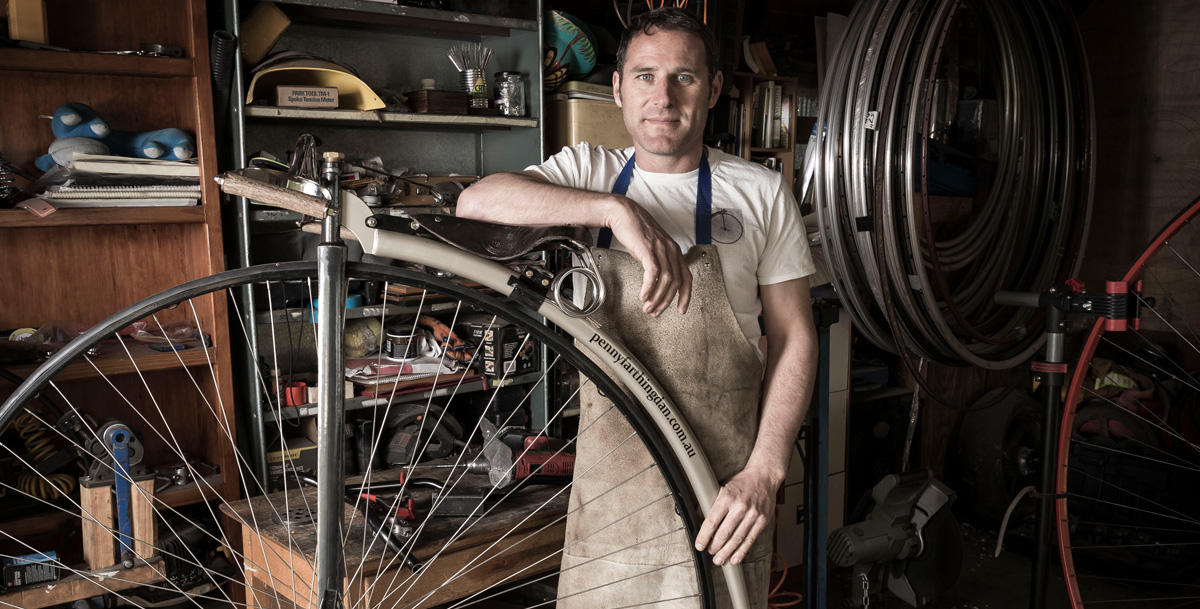 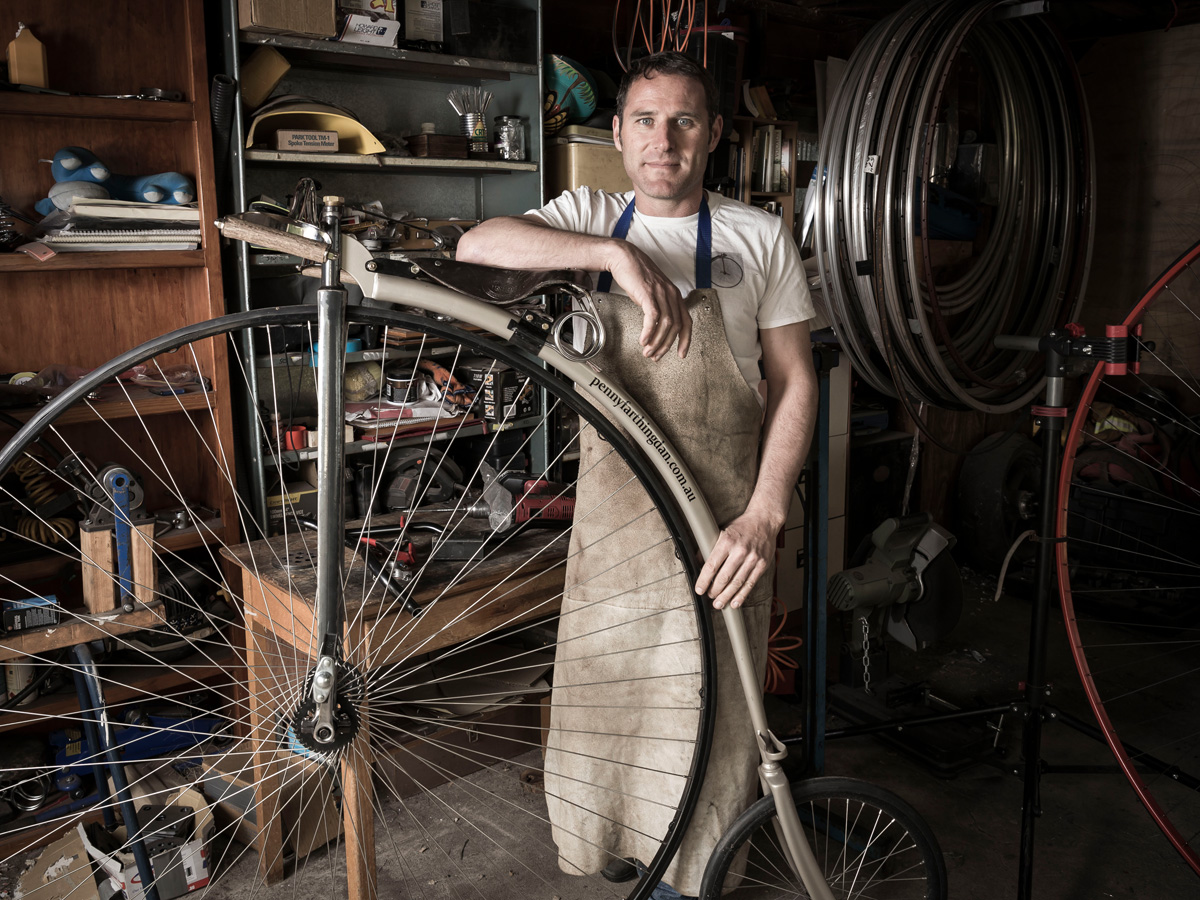 A tinkerer by nature, Dan Bolwell’s penny-farthing bicycles have seen him become a world-leader of a community keeping the art of ‘high wheel’ cycling alive.

Dan Bolwell, a.k.a Penny Farthing Dan, might just be the world’s only bespoke custom penny-farthing bike builder. Avoiding the typical ‘top hat and tails’ tropes, Dan’s bikes are intended for the road – often at breakneck pace. Growing up on a farm in Western Victoria, from the malleable age of 12 until his early 30s, Dan spent much of his time in an eclectic engineering workshop. Here, local farmers, tradesman and tinkerers would bring in defunct and broken down machinery – most of which had been long out of production.

“Often we encountered really unusual stuff – it wasn’t your typical parts replacement shop. We fixed anything and everything; things where the parts were non-existent and we had to make our own,” recalls Dan. “Without that time spent in that engineering workshop when I was growing up, I wouldn’t be doing what I am doing today.”

Relatively isolated on the farm, as a teenager, Dan used his adept fabricating talents to build mishmash bicycles, using them to travel to the distant shops and visit friends. Having read about penny-farthings in a set of encyclopaedias, Dan became absorbed by the style, which despite their relatively rapid rise and fall over a 20-year period, has endured as an example of 19th century ingenuity.

Taking on the task of designing and building his own penny-farthing, Dan’s early models proved successful with the now consumed craftsman quickly covering 8,000 kilometres atop his new ride. Realising his bike’s durability and reliability, Dan left the workshop and has now been manufacturing penny-farthings for 12 years. Dan can produce the bikes at a rate of almost one per week, and with the penny-farthing’s connection to modern bicycles and the emergence of track racing, he considers it to be one of the most pure cycling experiences.

“By 1880 we had cycle racing and velodromes, we had roller bearings, lightweight tensile steels and thin clothing. During that period we went from a velocipede, to a boneshaker, into the penny-farting that could do 50 kilometres per hour,” says Dan, chuckling at the thought of daring riders rocketing down dirt roads.

Dan has established himself at the forefront of a growing worldwide community of passionate ‘high wheel’ cyclists. Built to the rider’s specifications in Dan’s Melbourne-based backyard workshop, the individual configurations of the bike reflect the rider’s personality and ambition to use it for racing, hill climbing or simply as a city-run-around.

“If they’re an experienced rider and they have a plan, it can make the design a bit more detailed … the bikes wheel size can change and you’ll get a completely different purpose. The way your body moves on a penny-farthing is completely different to a normal bike,” explains Dan. 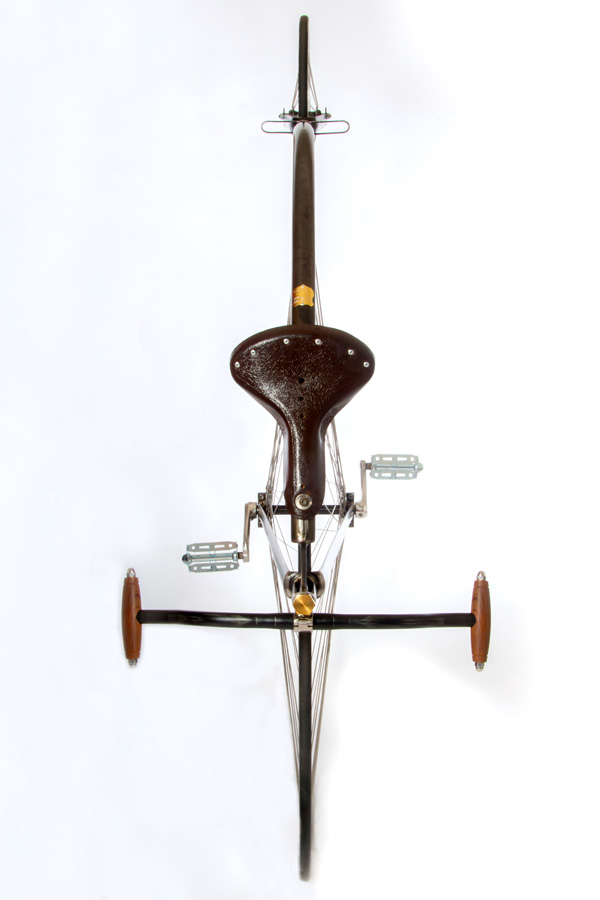 Dan’s influence is not just limited to Australia, as his penny-farthing designs have made their way to Malaysia, Thailand, Singapore, England, New Zealand and the United States. Dan often accompanies his bikes to his international customers, teaching them specialised riding techniques and best practice for maintenance, ensuring the bike’s longevity. One of Dan’s riders – a pastor from Penang, Malaysia – has completed 13,000 kilometres since setting out in August 2016 to raise money for his orphanage in Thailand.

With the international community of penny-farthing riders continuing to grow, through ride days and races, social media and word-of-mouth, Dan believes there is still much scope to grow. And as the general public becomes more aware of the penny-farthing’s rideable nature, he expects to see more of these now century-old speedsters taking to the road and the track.

“Everywhere you go you get this really positive reaction – us riders absolutely love the happiness, fun and connection it creates for people.”