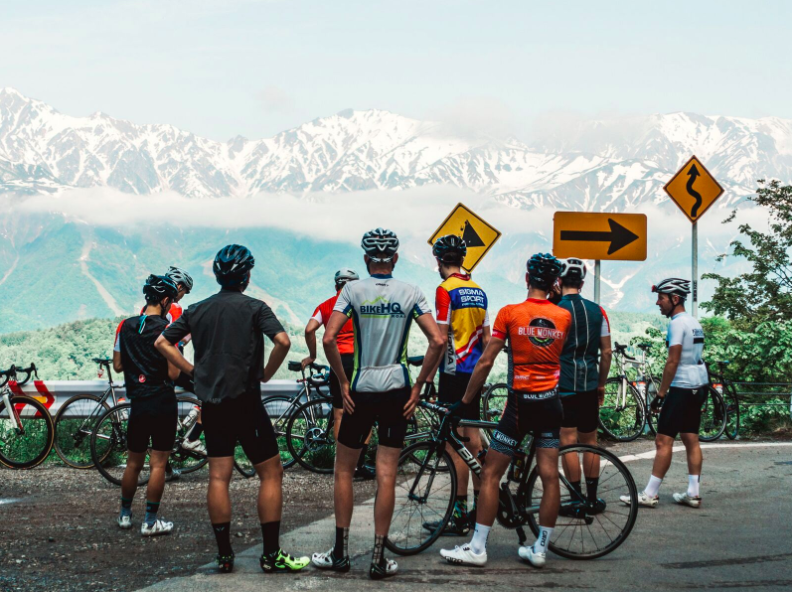 Our trip to Japan began as a simple idea: we wanted to hang out and ride with our mate Henry who now lives in Tokyo. Before we knew it we had planned a 970-kilometre loop through the Japanese Alps over six days. Setting off at around nine on a Sunday from Shinjuku, the Tokyo streets were relatively quiet.

Ten minutes into our ride we approached the famous Shibuya Crossing, aka The Scramble, one of the world’s busiest intersections, before pushing on towards Tokyo’soutskirts. Leaving the city edge we started ascending, approaching the first of several successive mountain tunnels, which provided short but welcome reprieves from the searing sun and heat.

Climbing on, past Lake Miyagase, the road zigzagged and the further we climbed the cooler the mountain forest. It was an insanely fun road and mountain to climb. By the time we reached Hadano it was approaching 3pm.

Day two presented us with more of the same. With Mount Fuji behind us we enjoyed the relaxed riding alongside each of the Fuji Five Lakes. The infamous Suicide Forest, the Aokigahara Forest or Sea of Trees, associated with demons in Japanese mythology, provided a sombre point of discussion. Emerging from a tunnel shortly after we experienced the best 20 kilometres of riding any of us had ever had, through the Yamanashi Alps.

It was smooth and fast with wide turning corners following the mountainside down towards the valley before a turnoff onto a smaller road. We followed the winding river through the gorge for a final 10 kilometres of pure bliss as we sped past small settlements and rice fields. By the time we reached the town of Ichikawa Honmachi at the bottom of the valley we were all on a massive high. Even better, a ramen and gyoza restaurant presented itselfright on cue for lunch.

Day three saw wet roads, cloudy skies and rain and, as we pushed on through the narrow valley from Chino to Hakuba, swirling winds. Having one of us able to read Japanese paid off when we discovered farmhouse restaurants in the forest and one of the best meals of our trip. Remember, shoes off when sitting on thetatami mats.

Stamps play an important role in many Asian countries, including Japan. Each train station has its own stamp design and it has become a popular activity for travellers to collect eki (station) stamps as they travel through Japan so two of us peeled off to collect the local stamp as we rode past Kitaomachi. Arriving at our lodge in Hakuba, B&B Santana, this bunch of sweaty bike riders was warmly welcomed by owner Albert, a pretty keen bike rider himself. Awaiting our arrival at the lodge was Adam and Pete. Adam, an Aussie living in Japan, would help guide us through the alps over the next few days back to his place, The Blue Monkey Lodge in Yubiso.

That afternoon most of us took the opportunity to visit the local onsen, where we relaxed in the hot baths, perfect for soothing tired and sore muscles. We were ready to go by seven the next morning, nervous about the 187-kilometre day ahead. Following Adam’s wheel through the crisp mountain air, we rode less than three km before we hit our first short but steep climb of the day. The group split almost straight away with Adam and Albert effortlessly pulling away up the road and disappearing into the forest. The rest of us struggled over the steep sections, 14 per cent gradients at some points. The view of the snow capped mountains of Hakuba behind us at the top made an awesome sight.

Reaching Nagano at the bottom of the valley, we briefly stopped at a 7-11 to refuel before taking on the biggest climb of the trip. It was late morning and getting quite hot. Officially 12 kilometres, the Sugadaira Climb was more like 18 kilometres of uphill from where we started. The wide road snaked its way up into the distance with large sweeping hairpins cropping up from time to time. We reached the top approximately 45 minutes later.

After filling our water bottles and taking in some energy bars we headed off to start the next climb, the Torri Pass. Similar in difficulty to the Sugadaira Climb but much shorter in length at five kilometres, the pass still had us digging deep to get to the top. Not having the luxury of an hour for lunch we made do with what 7-11 had to offer. Convenience stores in Japan are stocked with some pretty good food – sushi, rice balls, udon and other hot food. There was a noticeable change in the terrain as we got closer to Blue Monkey Lodge. The mountains weren’t quite as big and spectacular, instead shorter and steeper. A break at a large shrine in the middle of the woods gave us a bit of time off the bike and out of the heat.

Leaving the shrine we began ascending once more. It was tough going and we were all feeling tired but we would end the day powering over the final climb and descent, finishing strongly as a group and pacelining through Minakami just as the wind from an oncoming storm hit us. As it started to rain we arrived at Blue Monkey Lodge, where we would stay for the next two nights. It was safe to say we all wanted to take it easy the next day and explore the area around Blue Monkey Lodge and Minakami not to mention the Takaragawa Onsen and local udon restaurants.

Our final day’s ride had been a point of much debate. It was a huge day on the bike, as we had to cover 260 kilometres to Tokyo. The early morning was cold and many of us wore jackets and gilets until we hit the bottom of the climb up National Road 62. The group didn’t stay together long and we quickly found our climbing partners to keep us company. The following descent gave us a chance to rest before the start of the Ashio climb.

With Adam driving the pace at the front, there was no letting up and the guys at the back were suffering. On the final 7.5 kilometre climb, hairpin after hairpin, we weaved around the shaded road holding a comfortable speed until we reached the top. Regrouping, Terence took the opportunity to hotwire his Di2 front derailleur from the small ring and into the big ring. His front mech had stopped working days ago and he had spent the morning tackling the mountains without the use of his big ring.

With a long descent and the final flat roads into Tokyo left, he road the last 150 kilometres in the big ring. A monumental effort. The last 110 kilometres presented a lot of other difficulties. Fatigue, dehydration and getting to Tokyo before sunset remained a challenge. We would not recommend riding the last 50 kilometres into Toyko. Catch the train. We were ecstatic to make it to the Rapha Cycle Club Tokyo where we were warmly greeted at sunset.

Enjoying a bite to eat, along with a few cold beers, we congratulated each other on both the epic final day and an awesome six days of riding. Walking only a few blocks back to our hotel after dinner, we stopped at a 7-11f or ice cream, not once but twice.