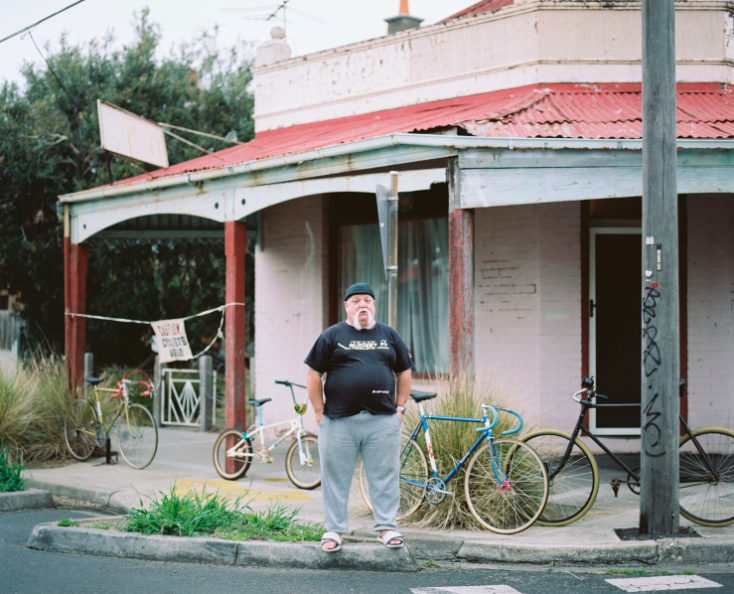 This dedicated cycling volunteer is focused on the 70s and one simple motto – “It’s only original once.”

“I saw a mint dragster at a garage sale. I drooled over it, spoke to the bloke about it, caressed it … and left without it,” says Cliff Mitchell. “Two weeks later I thought, ‘you dickhead!’”

That was the moment that Cliff began collecting bikes. The dragster brought back memories of his first childhood bike and he was determined to have one again.

“My first dragster got stolen, so I went to a police auction and they sold me a Malvern Star five-speed. That’s how I got into racing. Then 30 years later a dragster got me back into cycling.”

That dragster is now one of a collection of 80-odd bicycles, mostly 1970s road and track racers.

“I like to see exposed brake cables, that sort of thing. I appreciate the early bikes too, things like Cyclo gears. Now it’s all Campagnolo and Shimano but back then it was a different era. If you had a bike made for you, you just updated the components when you could. When I was racing it was nothing for someone to give you a 40s or 50s frame for you to build up and race.”

He describes himself as a crazy collector, with bikes just one target for his acquisitive urges. Early Australian colonial furniture, art, tin toys, showbags and 1970s ‘sharpie’ clothing are some of the things that Cliff has accumulated. “My other half collects as well,” he says.

Among his most treasured possessions is a collection of cycling ephemera. “Race programs, catalogues, posters, they’re a really important part of history,” Cliff says.

“I covet my paper stuff more than the bikes. I don’t know whether I think they’re more important – the bike is the story but the paper tells the story. I can see a photo of a bike and go ‘yeah, yeah’, but I see a photo of the bloke that rode it, face caked in mud, and I think ‘how tough was he?’ The bikes were impressive, but the guys who rode them were amazing.”

His admiration isn’t just for racers either. “My grandfather used to tell me stories of riding 60 miles each way through Gippsland to court my nanna on a bike with no gears. You see photos of men like that in their suit pants and jacket. How tough were they? How strong?”

Preserving the story behind the bike is important for Cliff, so he prefers not to restore them.

“I like my bikes as original as I can keep them,” he says. “Others like to restore them. I can admire that, but when you’ve got something that’s 80-years-old, the paint isn’t perfect but it’s still there and it tells a story. I read a line in an article years ago that sums it up: it’s only original once.”

It’s an approach that sometimes requires self-discipline. One of Cliff ’s most prized bikes is an Olive, a striking one-of-a-kind machine from the 1930s that still wears its original pigskin tyres. “I’d really love to pull the tyres off, put some new ones on and take it for a ride, but … ”

Keeping the bikes original is important, but bikes were built to be ridden and Cliff enjoys taking them out for a spin when he can. “Even if it’s only up and down the street, I want to have a ride on it,” he says.

“I’ve got a bug with old watches at the moment, wearing different ones when I go out. It’s the same with bikes; if you’ve got them you should ride them. It might only be down to the shops, but there’s nothing better than sharing them. Nine times out of 10 some old bloke sees it and remembers.”

Asked which of his collection he would keep if he could only have one, Cliff struggles to answer. “That’s hard. That’s a really hard one. It’s like being asked which of your children you’d keep,” he says.

He narrows it down to three: his dragster, the Olive and a 1910 Massey Harris road/track racer, but there’s one bike he would love to have above all others.

“If I had my grandfather’s bike, even if it was just a dunger, that would be the one I’d save,” he says. “But I had a poor upbringing. You never hung onto things like that, they got passed on.”

Cliff gave racing away as a young man, but rediscovering his love for cycling has led him back. “I did go back to racing for a little while but it was too dangerous. The way back for me was to volunteer,” he says.

He can be found helping out at the Austral Wheel Race, Tour Down Under, Australian Championships and at the Blackburn Cycling Club.

“My excitement now is to work at the races and meet people like Greg Lemond, and to thank these guys for the pleasure they’ve given me over the years. A lot of people don’t get the chance to thank their heroes.

”The urge to collect is strong, but Cliff is in the process of culling his collection down to a more manageable 25-30 bikes. “I’m passionate about my bikes, and meeting people and sharing stories about them,” he says.

“Sometimes I’ll sell to people who want a period bike. I’m happy to help someone else along.”His collection might get a little smaller, but his collecting will surely continue.

“It’s not about having money, I enjoy the wheeling and dealing. I once bought a clock in a second-hand shop for $20 and sold it for $2500 to buy a penny-farthing. If something was meant to be yours, it will be yours.”

This article originally appeared in Treadlie #17