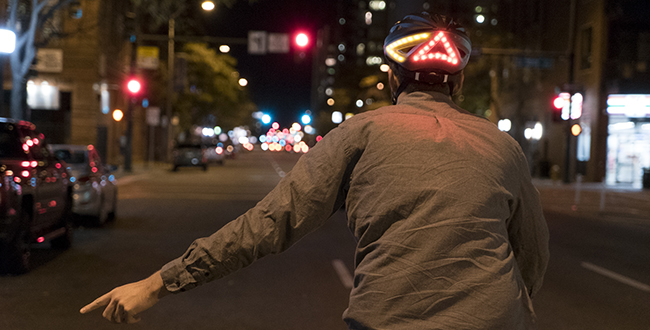 The Lumos Helmet applies the latest in smart technology to bike safety gear. The helmet integrates lights, hard brake, turn signals, and a helmet all into one. Read on if you hate multi-tasking.

Lumos is the brainchild of two engineers who were seeking to increase safety for city cyclists without compromising on aesthetics. The team reached out to the worldwide cycling community via Kickstarter where their project was embraced by 6072 backers. Since then, the Lumos Helmet has collected a slew of awards and commendations including winning in the category of Product Design at the 2017 Red Dot Design Awards.

Let’s get down to the nitty-gritty. The helmet comes decked out with no fewer than 48 integrated LEDs (that’s 38 in the back and 10 in the front) to optimise visibility on the road. It also features left and right turning signals that are activated using a wireless remote attached to your handlebars. The remote is detachable, weatherproof, rechargeable and has a built-in accelerometer that senses when you’re slowing down. When you’re easing on the brakes, the helmet fully illuminates at the back to let motorists know.

The Lumos is an all-weather helmet that is rechargeable. Lumos says it takes two hours to fully top up the helmet and that its light lasts three hours in solid mode and six in flash mode.

Any invention these days wouldn’t be complete without a complementary app, and Lumos get that. The Lumos Helmet App lets users keep track of battery life, adjust helmet settings and update firmware.

The helmet has received largely positive reviews to date. Some note that it is a bit heavy for prolonged wearing, making it most suitable for shorter-distance commuters. Importantly, Lumos should not totally replace lights affixed to your bike, rather add to them.

If you’re into newfangled tech that also keeps you safe, look no further.