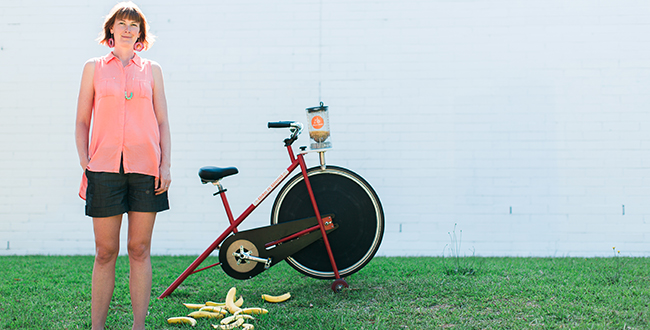 Passion and a Breville can lead to incredible things. Just ask the founder of Bike n’ Blend.

If you hadn’t considered using the frictional power of a bicycle to produce a breakfast smoothie, you haven’t been exposed to Bike n’ Blend, a unique cycling concept heralded by the dynamic, cycling enthusiast Leena van Raay.

“As a young girl I was encouraged by my mother’s friend to cycle to school,” explains the Melburnian.  “Despite my inexperience, I managed to navigate through the traffic-ridden streets, emerging with a significant dose of confidence.”

Buoyed by this, Leena agreed to join a group of friends on a cycle trip through Tasmania during her first year of university. Although she had just recovered from a severe bout of illness, she seized the opportunity.

“The trip was gruelling but I emerged fitter, healthier and happier than I’d ever been.”  Leena has since embraced adventure cycling, pedalling her way through Myanmar, Cambodia and Tonga, racking up a number of heartwarming and equally hair-raising anecdotes.

But it’s her infectious enthusiasm and headstrong approach that’s propelled her to develop more than a casual interest in cycling. “I’d worked in medical research for over a decade and had developed a real passion for health promotion,” she explains. “I came across so many sick people and thought why can’t they live a happy, healthy and active life?”

It was this line of inquiry that led Leena to start working for two small companies in a part-time capacity. “I worked for a bicycle tour company and a rickshaw business where I learned about branding and marketing techniques,” she says.  “Then I started to think about building my own cycling business but knew that I needed something clean and slick that would attract people to cycling in a unique way.”

She came up with the concept of harnessing the energy output of stationery pedal bikes to blend fruit smoothies. “I saw how Bike n’ Blend could be a powerful tool in encouraging more people to cycle, and it actively promotes healthy living and sustainability.”

Leena engaged two engineers to help design her first bicycle, which included a re-purposed Breville blender fitted on top of the front wheel.  “When the pedal turns the wheel it produces friction or ‘legtricity’ as we like to call it, which causes a rod – attached to the wheel – to spin the blender blades.” To gauge public interest, she exhibited at a few local markets, connecting with the public as well as fruit growers who provided invaluable advice on where to source bulk product for the smoothies. After a few more positive events,  Leena took a stand at the Royal Melbourne Show, by which time she had upped the bicycles to seven.

“It was at this point that I really started to see Bike n’ Blend working as a business model.  The concept not only resonated with individuals but could work as a powerful engagement tool for businesses.”

Unsurprisingly, the entrepreneur is already working with the likes of Bupa and non-profits such as Sea Shepherd, as well as community organisations and councils to promote new local initiatives.  Bike n’ Blend will also be involved in one of Cadel Evans’ final rides, auctioning off smoothies generated by his power pedalling.

Along with a growing team of collaborators and staff, Leena has established offices in Adelaide and Sydney, expanded her bicycle count to 30 and has just completed over 250 events in Melbourne in one year.

“The pedal-friction method started off being used in Central America as a much-needed energy resource. We’re incredibly fortunate in Australia to be able to use the principle to promote health and sustainability. What’s more, we’re boosting an overall interest in cycling and the latter has always been my main goal.”