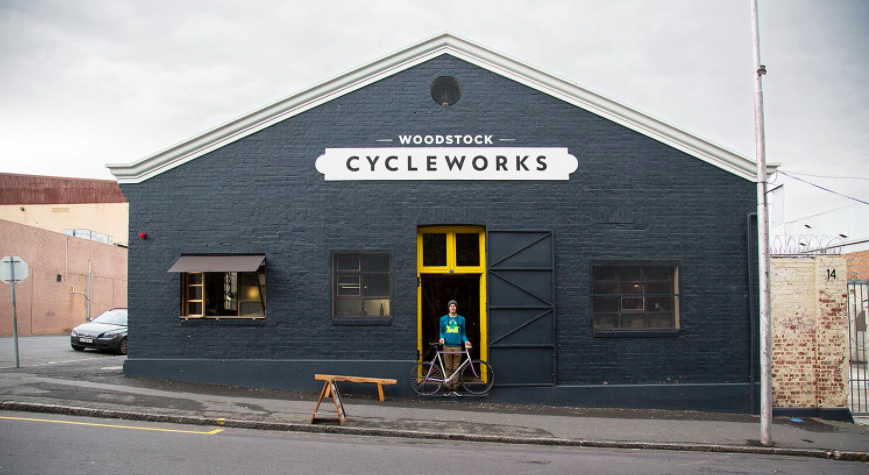 A community hub for bike enthusiasts across Cape Town, Woodstock Cycleworks is an inspiring lesson in making dreams become reality.

From a distance Cape Town’s Woodstock Cycleworks might look more like a scrapyard than a cycling superstore. Bikes rest against practically every surface, rare Italian and French racers are suspended from the rafters and a myriad of road bikes, cruisers and mountains bikes are perched every which way throughout the warehouse.

When Nils Hansen founded Woodstock Cycleworks in 2012, he had already “planned for the worst”. While today the workshop overflows with bicycles, initially Nils had opened the shop with close to just $500, which bought a few tubes, tyres and just a couple bikes to sell. In hindsight, Nils thinks his plan to keep the store afloat by selling cycling basics was somewhat ridiculous.

“As we employ more people and grow in space, I look back and think how crazy it was that I based it all on that simple formula. But we still keep it very basic and that’s why people like us – the no bullshit type of stuff,” explains Nils.

Nils has surrounded himself with bicycles since a young age. His first came on his tenth birthday, when Nils’ father bought him a “cheapy steel mountain bike with rigid forks,” which was either a Peugeot or a Nishiki, Nils forgets. He soon acquired a second bike; this time he stripped the paint before finding some old spray cans to give it a custom purple and green metallic upgrade.

This tinkering held true into Nil’s adulthood where he first studied Engineering at University of Cape Town, before switching to Product Design at Cape Peninsula University of Technology. Nils worked as a product designer across Cape Town until he was laid off in 2010.

Following a short-lived product design collaboration with a friend, inspired by his mother’s own budding business, Nils decided that it was time to actuate his long-held vision of owning a bike shop into a reality.

“Growing up I learnt a lot from my mother’s clothing business … this drive to grow, produce and make a profit to live is obviously ingrained in me,” says Nils. “The engineering and design clearly helps in marketing, store design and custom builds, while the engineering I use every day for mechanical problem solving.”

While the dedicated customers of Woodstock Cycleworks have remained much the same over the years, serving everyone from beginners to pros, Nils finds that changing styles and trends have “translated into different wants and needs from customers”. Cape Town’s sizeable riding community now seeks out more versatile rides over singlespeed or fixed-gear bikes.

Nils’ talents as a bike mechanic are not limited to working on only the highest quality bikes. Working on anything from “the cheapest and nastiest bikes to the most expensive carbon road and mountain bikes,” Nils’ favourite remains the classic 1970s-style road bike for their durability and timelessness.

Despite a slightly heavier frame than their modern counterparts, Nils believes that these bikes “not only look good but the actual quality of the ride they give is on par with current bikes, if not better.”

At times, the shop takes on a gallery-like experience, with Nils ‘exhibiting’ bikes that are too precious – monetarily or otherwise – to sell.

“Some bikes I will never sell because they are just too nice and need to be showed off,” says Nils. “The money would simply not replace the feelings it releases in people.”