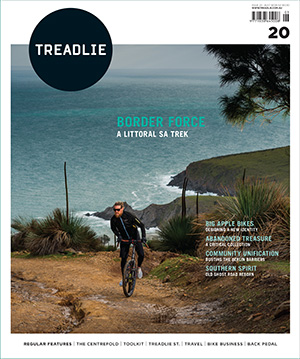 Issue 20 of Treadlie Magazine is available now in stores Australia wide, as well as on iPad and Kindle. Of course our subscribers receive a copy first and if you would like to join them then you can head over here to do so.

As we well know many people get pretty passionate about their bikes but often they are simply the means to a desire. In this issue we see how a photographer, an explorer, a group of chefs and a teacher use bicycles in the pursuit of something much bigger.

Che Chorley could only have taken the extraordinary images of the South Australian coastline (one of which features on the cover) on a bike. It enabled him to be immersed in the landscape, through dramatic changes in light and movement while also achieving his goal of riding from one border to another.

The discovery of an old map sparked an avid response from a group of adventurers to rebuild the Old Ghost Road through New Zealand’s Mokihinui-Lyell backcountry as a mountain bike track. Now those brave and fit enough can tackle the track, while enjoying the breathtaking views.

Explorer Kate Leeming is working with a bike designer on the world’s first all-wheel-drive fat bike to take her from Leverett Glacier to the South Pole in an effort to get youth engaged in creating their own activities and adventures.

The passion of a dedicated teacher and bicycles are at the heart of a bike-building program in Tasmania, designed to instill a sense of purpose and resilience in disenchanted kids. And kids are also the impetus behind an ongoing campaign by a group of chefs who for the fourth year in a row will ride bicycles to raise funds for breakfasts.

Of course we still have plenty inside on those that get pure and utter joy from simply riding, collecting and building bikes as well, and Toolkit is bursting with beautiful, inspiring and technology driven goodies.