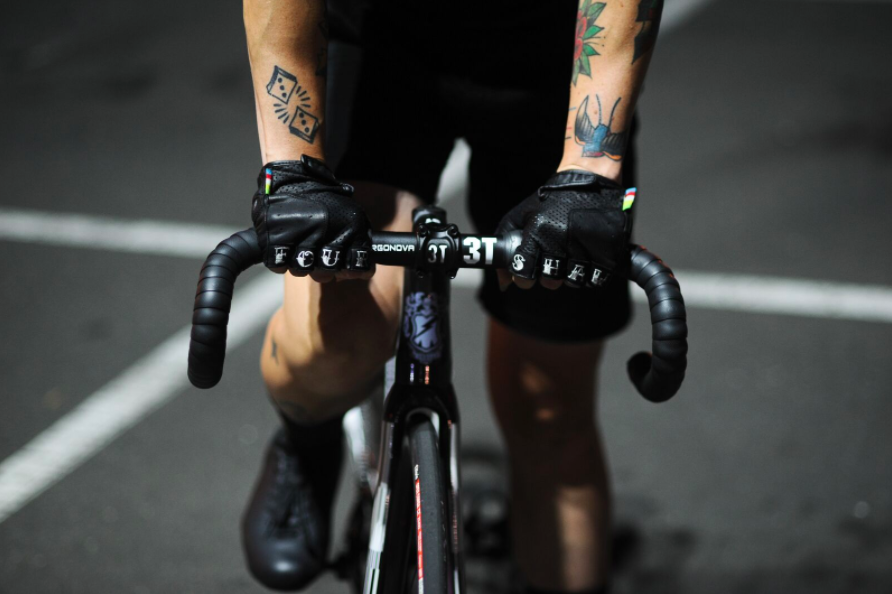 If you think Lycra is just for dorks and gearheads, you should have a chat with Melbourne’s track cycling star, Leeana James.

Cutting a striking figure in a black 4Shaw skinsuit, immaculate red lipstick and a haircut that carves to a sharp point at her nape, the former fashion design teacher is not about to sacrifice her sense of style at the cycling altar – and she knows where to get the hottest kit.

Every new outfit is featured on her popular Instagram feed in a carefully styled kit grid (or what the fashion world calls a “flat lay”). “There’s nothing instant about my Instagram,” says Leeana. “These take hours to put together.”

“I just really love promoting awesome stuff. If I can take a picture and potentially 2000 people will see it, I’m happy to do that for the people whose kits I wear.”

Despite being found in her track getup – kit or skinsuit, cycling cap, gloves and signature cat eye sunglasses – more days than not, Leeana is still relatively new to the cycling scene.

Something of a connoisseur of subcultures, her past is divided into distinct phases – she was a rave dancer for a long time, then studied fashion design and became an exhibiting textile artist, and has done deep dives into the street art scene and craft renaissance.

Her first bike, a three-quarter-size Chinese step-through from the 1970s called a Shanghai Phoenix, was acquired in her late twenties during her rockabilly phase. Melbourne crafters might know it as the yarn bomb bike in the window of Morris and Sons, the knitting and needlework shop where Leeana used to work.

“I was totally all about my classic bike. I never thought I’d see myself on a carbon road bike!”

She eventually discovered the track-racing scene as part of another life transition. Wanting to seek out new friends and experiences following the end of her marriage two years ago, Leeana started trying out different cycling styles and discovered that she was fast – really fast.

A friend suggested that she should try out track riding. She won her first race, the Hawthorn Trophy Race, “by a lot”, and in 2015 racked up eight Cycling Victoria medals. She made it to the final with a top ten finish competing against international stars in the Austral Wheelrace and won the Victorian Omnium. Not bad for a newbie.

She also completed an Everest – riding uphill one gruelling repeat after another until you’ve ridden 8848 metres vertical in one ride – in order to qualify for the coveted Hells 500 grey stripe jersey.

Not content with the pink or blue stripe jerseys that anyone can buy, Leeana went up the Two Bays Road hill climb at Mt Eliza 89 times over 28 hours in order to bag the grey. “The Hells 500 jerseys are beautiful,” she says. “They’re very iconic-looking – you know when you see a Hells 500 jersey.”

Submerging herself in the subculture has delivered some other fashion perks as well. Her barber, Rich Kemp, is a Hells 500 guy and a track racer, and the only hairdresser allowed near Leeana’s cut. Since discovering boutique brand Hunter Brothers Cycling, Leeana has acquired some new ink.

“I loved the style of their kit and the fact that Hal Hunter is a tattoo artist. Hence one, two, three, four, five, six tattoos since, by Hal,” she says, pointing up and down her arms.

Tuesdays are barbershop days, followed by training in the evening at the Darebin International Sports Centre velodrome (otherwise known as DISC). Here she picks up tips from the veterans and tests her limits to see exactly what she can do.

“Tuesday night racing has been the greatest fun and the best way of learning what you’re capable of. I’ve rolled the dice five laps out from the finish. Can I do an attack and stay out for five laps? I don’t know. Maybe I’ll get caught in the third, or with one lap to go. Maybe I’ve got a five-lap sprint in me. Who knows? At the moment I’m just riding my bike real fast and succeeding at it.”

Never one to dwell in the past, Leeana has now completed a full transformation into this new phase of her life – she’s quit her job as a fashion design lecturer at RMIT to combine training with a full-time bike shop job.

And she’s getting attention from all the right places, having just been asked to join a Milan-based fixed-gear team called Why Be Normal? who she’ll be racing for in the Red Hook Criterium series in New York, Barcelona, Milan and London.

“Full-time bike shop, being flown around the world riding bikes, doesn’t really get much better than that,” says Leeana. “Every single subculture I’ve lived in and been a part of, I’ve lived my dream.”

This article originally appeared in Treadlie 18.