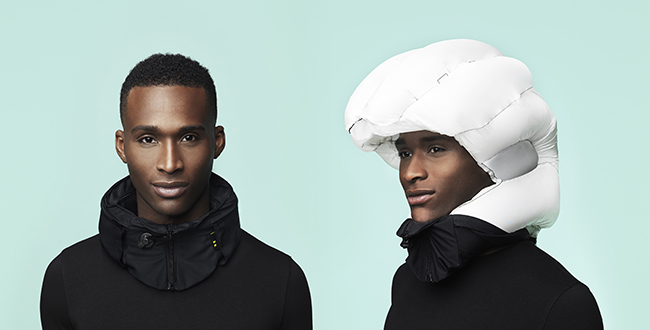 There once was a time when airbags were reserved only for motorists. Then, two Swedish Industrial Design students invented Hövding, an airbag helmet specially designed for urban cyclists. The duo sought to create a bike helmet that cyclists would want to wear despite not being legally obliged to in their home country.

Hövding is worn as a collar while riding. In the unfortunate event of an accident, the patented airbag contained within inflates in 0.1 seconds to form a hood that surrounds your neck and head, fixing them in a safe position. Promisingly, it provides three times better shock absorption than a traditional European bike helmet.

The airbag helmet uses sensors to detect abnormal movement. And it works hard: when activated, Hövding records the cyclist’s movements 200 times a second. They are powered by USB charging cable and a fully charged Hövding can last for up to nine hours of active cycling. The wearer simply activates their helmet using a button when setting off on a ride.

While this product may raise a few eyebrows, the viability of its technology is not to be underestimated. In 2016, Stanford University ran a series of tests and concluded that Hövding reduces the risk of concussion up to eight times and almost completely eliminates the risk of skull fracture.

At the moment, Hövding is only available for sale in Europe and Japan.