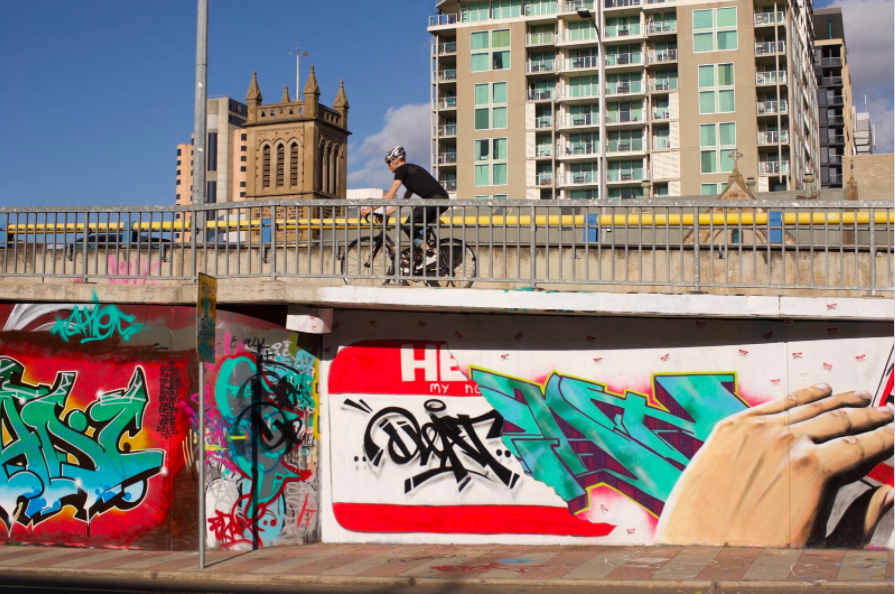 The Canadian who ended up in Adelaide via the UK and decided to write a Cycling Blog – 18 months on The Sticky Bidon is adapting to the times and is as enthusiastic as ever.

“If we could somehow make everyone ride a bike for a week, they would treat cyclists differently,” says Graeme Thiessen. Enforced cycling might be beyond his powers, so instead Graeme spreads the word through his blog, The Sticky Bidon.

Named after the road racer’s practice of gaining a bit of assistance by holding on to a water bottle as it’s passed from a team car, the growing blog aims to give cycling culture a little push in the right direction.

The Sticky Bidon isn’t aimed at people who ride bikes as part of their regular life, rather the sporting or enthusiast cyclists. Articles cover topics ranging from advocacy and transport policy to personal expressions of the joy of cycling, along with photographs and product reviews.

“In a way, it started on a whim, but the seeds had been planted for years,” Graeme says. “When I got to Australia, everyone I knew rode bikes. I work in a bike shop. Without trying, bikes have become pretty much my life.”

In fact they were always important to Graeme, starting as a young boy on the Canadian prairie. “It’s not like I was going to turn into a pro,” he says.

“Like most kids do, I rode around the neighbourhood with my friends. I liked it quite a lot, but it was just something normal.

Ten years ago he left Canada, spending five years in the UK before moving to Australia. While in Britain, Graeme started cycling more seriously, switching from mountain bikes to road bikes. With his wife, Myra, he rode the length of the country, from Land’s End to John o’ Groats.

“It was a mix of good and bad. I’d do it again in a second, but we couldn’t see each other the whole time because the weather was so bad.”

Moving to Adelaide gave him some perspective on the position of cycling in society. “The south of England isn’t a cycling paradise, I felt less comfortable there than here, and I developed an awareness of the cars versus bikes thing.

“My thinking about cycling became more formal, and I express my thoughts better in writing than orally. I’d been wrestling with ideas and thought I’d start a blog. I’m one to let ideas simmer away, but this time I thought I’d just start, put something in place before I let it peter out.”

That was in September 2014. To begin with, Graeme penned five posts a week. “I had no life,” he says. “A couple of months ago I scaled back to three a week and found some other contributors to take up the slack, as well as provide some other perspectives, other voices.”

He has been fine-tuning The Sticky Bidon, dropping the news section and concentrating on positive stories over confrontational ones. “Unfortunately, it looks like advocacy just isn’t sexy, whereas the joy of cycling definitely is,” he says. Asked if he’s optimistic about the future of cycling, Graeme gives a qualified “yes”.

“It depends how far you step back. What part of the world? Short- or long-term? I think an increase in cycling is inevitable. With population growth, congestion, climate, we can’t continue as we are. We have to change, but whether it will be in time to be helpful, I’ve no idea.”

As for The Sticky Bidon, he is pragmatic. “In an ideal world it would become a full-time job and I’d make an income,” he says. “But there are millions of these things around the world, why would mine be successful? Realistically, I don’t see it happening, but I’m happy to keep doing it anyway. It’s not about me – if it encourages more people to talk about cycling in a positive way, that’s fantastic.”

This article first appeared in issue 18 of Treadlie.