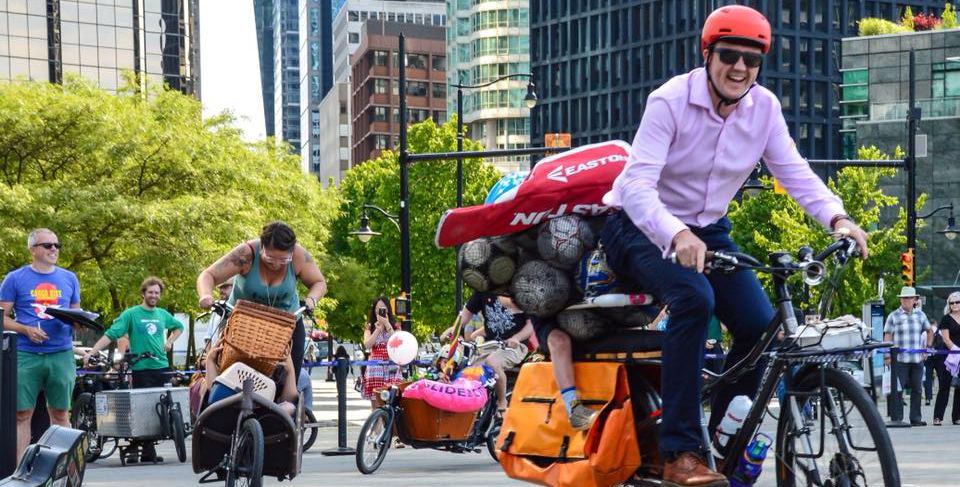 Canadian multi-modal mobility consultancy, Modacity was founded to explore and champion “healthier, happier, simpler forms of mobility”. Naturally, the gang there are big fans of the ol’ bicycle. In fact, they support cycling so much that they host a Cargo Bike Championship in Vancouver that is now in its fourth year. We spoke with Modacity co-founder, Chris Bruntlett in the wake of the most recent event on 20 June.

What inspired you to create the Cargo Bike Championship?

After entering the cargo bike market in 2014, our family were getting lots of questions from friends, but repeatedly hearing about the same barriers to cargo bike ownership, including the lack of financing options, the lack of parking, and the lack of availability in the local retail shops. With very few spots to test drive and purchase, buying a cargo bike was a gigantic leap of faith.

To address these barriers, we organized Vancouver’s First Cargo Bike Championship in 2015. Teaming up with HUB during their Bike to Work Week Wrap-Up BBQ event ensured a built-in audience. So we started spreading the word on social media, and figured we’d get a dozen friends to join us.

How has the public received the event?

Word started to spread, we ended up on the cover of the Vancouver Courier, and suddenly had 37 people registered! It wasn’t about speed or strength, but creating an inclusive, family-friendly event, demonstrating the capabilities of a cargo bike with household items. When all was said and done, we walked away happy with [the] event, determined to make [it] bigger and better next year.

Over the course of the event’s four years, have you noticed an increase in cargo bike riders in general?

In the three years following, we’ve grown our event, both in size and in profile. We’ve also seen a distinct rise in the number of cargo bikes on Vancouver streets, as conditions begin to improve, word starts to spread, and the retail shops finally start to catch on.

What are the prizes?

This year, we gave away a restaurant gift card, a craft brewery bike tour, hats from tentree clothing, a case of craft beer, and a whole bunch of bike gear; which were all donated by local businesses.