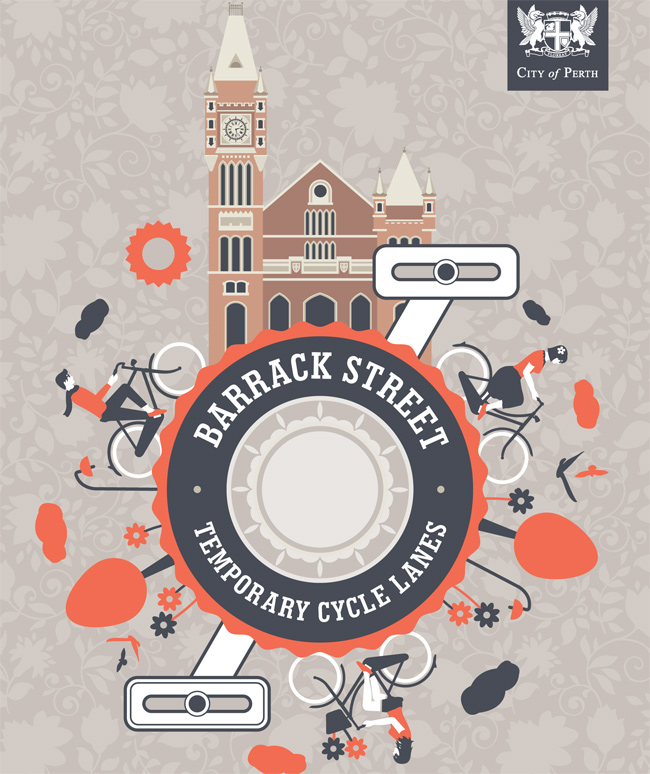 The City of Perth has announced a proposal for a temporary cycle lane utilising a now defunct bus lane on Barrack St.

The City wants to take advantage of the relocation of buses from Barrack S to nearby William St and shift the street’s focus away from traffic and transport to a more people friendly street. An important step in facilitating this change in focus is to create an environment that is orientated towards pedestrians and cyclists. At the moment, the hostile traffic conditions in Barrack St force many cyclists onto the pavement, in turn, making it less pedestrian-friendly. Now that Barrack St is ‘bus free’, (excepting the CAT buses) the City proposes to re-purpose the now redundant bus lane as a cycle lane.

While there are plans to introduce permanent cycle lanes to Barrack St in the future, using the existing bike lane would mean cyclists would very quickly have access to a safer riding option without having to wait for the longer term solution.

The temporary bike lane would join up with permanent lanes to be introduced mid 2014 in a section of Barrack St between St George’s Terrace and Riverside Drive and together provide a continuous link for cyclist traffic between the river and Northbridge.

The temporary lane would be separated from traffic and operate as two cycle lanes, one running north-south and the other south-north. There would be no changes to the existing general traffic lanes or the flow of traffic in these lanes. There would be one area of shared space between cyclists and pedestrians around a bus stop.