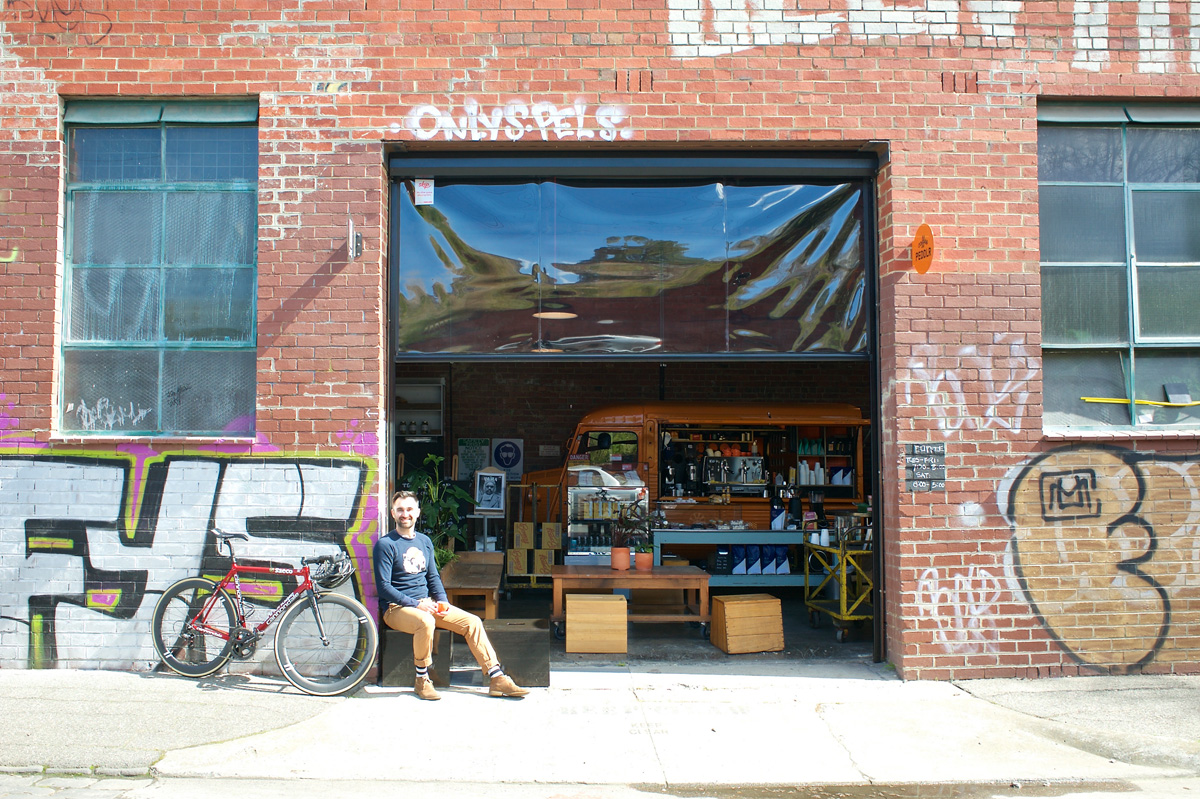 Armed with a cheerful orange van and a love of all things cycling, Coffee Peddlr has become a staple of the Melbourne bike scene.

Amir Shayan was looking at a panoramic photo of Melbourne in a pub one day when he spotted something very familiar – an orange speck near the Southbank boat sheds. He knew immediately what it was: the Citroën H Van he had imported from Europe and fitted out as a pop-up cafe for cycling events.

“I was a little apprehensive at first about whether the colour was too bold, but it’s been fantastic,” says Amir. “It’s become a sort of beacon.”

The cheerful orange van has become a familiar sight at cycling events in Melbourne since Amir launched Coffee Peddlr at Dirty Deeds in 2013. As a practising architect with expertise in designing for hospitality spaces, Amir wanted to create something that would bring the worlds of cycling and specialty coffee together and form a hub for Melbourne’s cycling community. His transformation of the former French council van into a mobile cafe took home the 2014 Eat Drink Design Award for Best Temporary Design.

In summer you’ll find Coffee Peddlr out and about, serving cyclists at races, by the bike tracks, or catering weddings and other events. In the colder months van resides at Coffee Peddlr’s brick and mortar establishment in Abbotsford. Riders can park their bikes inside and regular events, like screening of the Tour, aim to cement the venue’s identity as a home away from home for cycling enthusiasts. Amir also hopes the place will help forge bonds between bike riders and the non-cycling public.

“I think there’s a really good crossover between the local residents, office workers and cyclists,” he says. “I think it’s important to create a link between the two communities.”

Amir’s childhood love of hopping on his BMX or mountain bike fell away when he hit university, but was rekindled about seven years ago when a housemate left a Cannondale CAAD 3 behind in lieu of rent. It was too small, but it was enough to get him hooked on the thrill of the ride again.

“I think for a lot of people it takes you back to your childhood,” he says. “You can’t think of anything else when you’re on a bike, or if you are thinking, you can free your head.” It’s a sentiment that’s echoed by many of his customers. “It’s just that joy and freedom of riding a bike, whether it’s rolling down to the shops on your old BMX or getting out on the road for a few hours. It’s a common link with every cyclist I’ve spoken to.”

The responsibilities of running a cafe, however, mean that Amir misses out on a lot of opportunities to ride – like the morning and evening commutes. But driving the van around town brings its own sense of joy.

“You can’t help but drive slowly,” Amir says of the left-hand drive vehicle. “Trundling along down the street, you see people look and smile, and that’s really satisfying. Old ladies who look like they have a European background look at it like it’s taking them back 40 years to when they saw it in the countryside of France or in the city in Paris.”

Citroën released an updated Type H Van earlier this year to celebrate the vehicle’s 70th anniversary, but Amir still prefers old trusty. “I see what they’re trying to do. I don’t think it quite has the same character and authenticity as an original.”
He’s a bit of a vintage collector in fact, fitting out the cafe in Abbotsford with filters from an old flour mill repurposed as room screens, and a kitchen bench that once stood in monastery. “Although you can create beautiful great new designs from scratch, this stuff just has that character,” he says.

And of course, Amir has great admiration for the aesthetics of the bicycle. “I’ve always been quite mechanically minded, and a bike, to me, is one of the most beautiful and simple machines ever devised,” he says. “No matter how many technical advancements come along, the essence of the bike has remained essentially the same.”