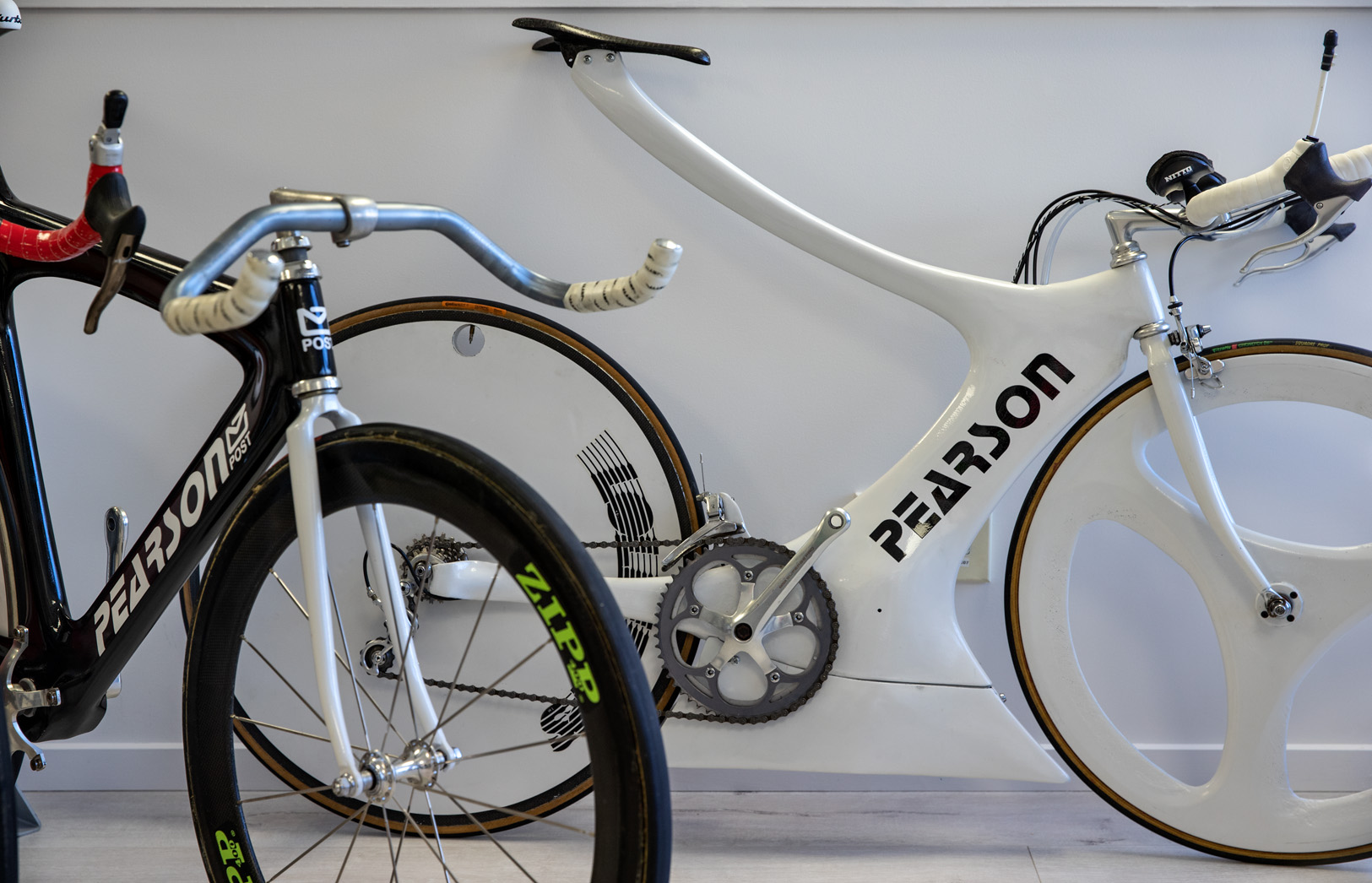 I don’t know where to look. Sorry, what I mean is I don’t know where to look first – my eyes flit around, capturing snapshots of what is within the reach of each glance. Apart from the plethora of beautiful steel offerings, the floor is also littered with futuristic carbon from the 90s, a time when the imagination and ‘can-do’ attitude of backyard boffins had the big industry manufacturers seriously scrambling to catch up to the fishtail aero offerings that were scribbled on notepads one day and built the next. Yes, in time this innovation was finally stifled by the powers that be, but this is a place where those Frankenstein butterflies are now displayed for us all to see, and are also there for us to let free and fly again.

“The plan was always to have a collection of bikes that people could come and ride, not just look at,” explains Steven Thompson, the mastermind behind the Forza! classic bike collection. “As I’d seen many exhibitions overseas where you can see but not touch them – and fair enough, as some are special historical items – but we always wanted people to enjoy them the way we enjoy them, and that is what makes the difference.”

It’s quite a concept, the ultimate immersive museum experience. Recreate the rides of your youth, or simply ride the bikes of your dreams. “They are all mostly from the mid-80s to the end of the 90s, mainly because I raced in that period but also because it was a really innovative period. Everything was changing, from frame shape to wheel size, it was when they started thinking the bike could make a real difference.”

Onwards we walk past the dozens of low-profiles lined up, ready for the perfect team time trial and most suitably decked with upturned cut-offs matched to 26-inch front and rear disc wheels. I start to count them: “Erm, [there are] approximately 41 low-profiles,” Steven sheepishly mutters, before giggling, “plus we’ve another four frames to build up. In total [there are] 94 bikes ready to go, with about 10 bikes on the rack just waiting for small bits and pieces and about another 14 frames too.” He then opens up the secret door to the storeroom, a veritable Aladdin’s cave of cycling gold; “We’ve probably got 100 wheels in here, about fifty 26-inch tyres in addition to the ones that are on the displayed wheels. Things like that are getting rarer to find, so when they do pop up I’ll pick them up. But I don’t buy to sell, I buy so people can enjoy them.”

Once word got around about his idea for the collection, Steven was inundated with donations, as well as leads to where he might find more treasure. “The collection is probably 50/50 from New Zealand and overseas,” Steven explains. “It’s just amazing what people have in their sheds. When we first started off it was just bikes, and then the people who were donating the bikes were donating their jerseys too, which was really cool, so we display them too.”

The silver fern of the New Zealand National Champions and National Squad initially dominates, but when you look for longer you spot a few signed rarities. “Next to the Lotus I’ve got two Chris Boardman ‘skinsuits’ that were sourced for me, they would possibly be the favourite items – purely for what that bike means and what he did as far as going fast and changing time-trialling.”

“The Lotus and the LOOK KG196 were always dream bikes for me, and it’s those that people gravitate to straight away, but as a collector you can’t go past the Pearsons.” Rotorua-based Graeme Pearson’s radical carbon designs continue to evolve even today, and the Pearson count is high on the floor. Steven visited his old race rival to build up a collection of prototypes and discarded frames Graeme had stored.

“Saying that, probably the most special bikes are the LeMonds, as he was always an idol.” Alongside the LeMond TT bike is a picture of Greg with Steven, taken when Steven’s LeMond builds were displayed at a dinner held for the American a few years ago in Auckland. “The look on his face when he saw them was just fantastic, just genuinely excited to see the bikes. He was sitting on them, recalling what it was like to ride them and remembering little things. But most of the time he was asking me about what we were doing and where to get the gear as he wants to get his own collection going again. That was pretty cool, you know, a little guy in New Zealand helping Greg LeMond get parts.”

My time there is cut short by the hours in the day, but at least I know I can always go back.“The bikes will never be sold. The longterm plan is to find someone after me who will want to take over, to do what I’m doing. The condition being is that they then pass it on to someone else and so the bikes will forever be there for everyone. It’s just something that I think is important.”