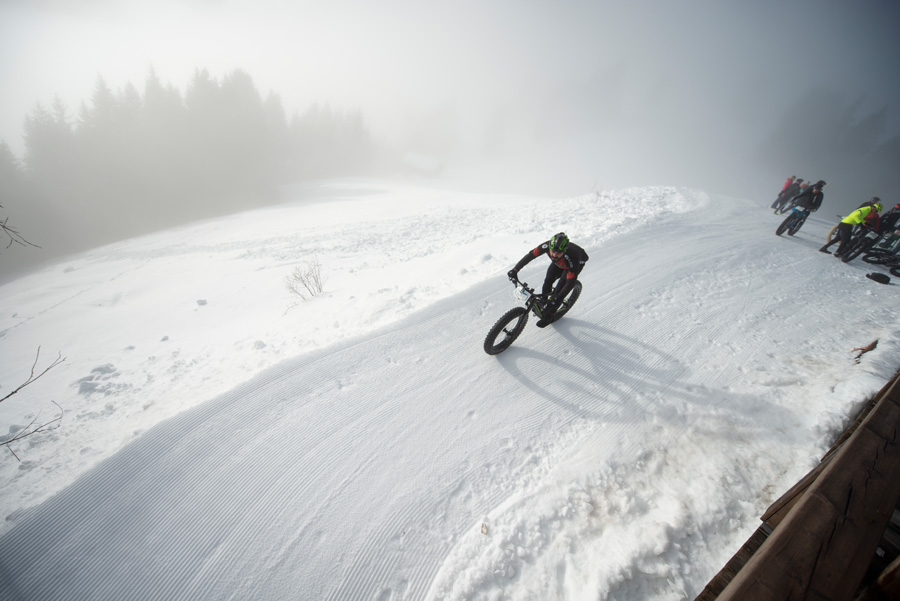 They can give you quite a workout, but they’re also the ultimate cruise machines. We drill down into the fat bike phenomenon.

In 1980, French adventurer Jean Naud rode a bike fitted with oversized experimental tyres across the Sahara desert. It was the first modern “fat bike” however commercial success for the concept would have to wait another 25 years.

The groundwork was laid in the late 80s and early 90s at opposite ends of the USA. In Alaska, riders competing in snow races had started welding two and even three rims side-by-side to allow for better floatation across soft snow.

As rims and tyres became more readily available, small framebuilders started producing fat bikes, but it wasn’t until 2005 that they hit the mainstream in the form of the Surly Pugsley.

At first the preserve of desert adventurers or snowbound cyclists who wanted to ride in winter too, the squishy-tyred machines were soon seen on trails and beaches, and soaking up the kerbs in cities.

Adelaide cyclist Ben Hughes bought his first fat bike 18 months ago after riding a friend’s Surly Moonlander. “I was amazed at how well it rode, considering how balloony the tyres are,” he says.

“It’s an upright position compared to road riding, much more relaxed. They can be a bit self-steering, but they’re not particularly wallowy unless you let the tyres right down.”

Hughes mostly uses his Salsa Mukluk on the beaches near his home, along with some off-road trails, and recently bought a Pugsley as a second fat bike so his partner or a friend can join him on rides.

In the ten years since Surly released the Pugsley fat bikes have become mainstream, with models ranging from full carbon competition machines to basic steel-framed cheapies. Hughes recommends caution at the cheaper end of the spectrum.

“It depends how hard you use it, but a small rider, fat tyres and a heavy frame – I don’t know how much it would get ridden if it’s too hard to enjoy.”

Another thing to consider is wheel, tyre and hub sizes. Some manufacturers use the standard 135 mm hubs used in mountain bikes, while 170 mm and even 190 mm hubs are now becoming available to suit tyres up to five inches wide.

Tyres and tubes are becoming easier to find, but at around $100 a tyre and $30 a tube, replacements aren’t cheap.

They may have started appearing outside cafes and pubs, but fat bikes remain primarily a tool for those who want to ride where others cannot. Hughes is organising an expedition for him and a few friends to ride 160 kilometres along the Coorong beaches, southeast of Adelaide.

“It’s just cruising along, not feeling like you’re in a hurry, not racing, just being out and about, taking it all in.” An alloy frame and 2×10 Shimano gears make this an affordable fat bike that has more than looks on its side. At 16.5 kg, it’s no featherweight, but the gearing and hydraulic discs help keep it manageable. Reid also makes fatties in 24” and 20” wheel sizes, ideal if the whole family wants to go large. Conceived more as an oversized BMX than a snow-busting expedition mount, the Fat Ripper will certainly stand out at the skate park. Marketing for the bike includes videos of rider Todd Lyons pulling off some freestyle moves, but at over 15 kg, aerialists will need to work on their core strength if they want to really fly. The Bigfoot range promises serious trail ability at an accessible price. The aluminium frame is matched with either a cromoly, aluminium or carbon fork, depending on your budget. A low stand-over height and SRAM brakes give confidence on soft surfaces. For the kids, a 24” wheel version is available, while Norco’s BionX e-bike system is an option that could take the sting out of the Bigfoot’s extra mass.

Surly was the first to mass-produce fat bikes and now offer a range to suit most applications. Cromoly steel frames aren’t light, but they’re durable, and lugs on frame and forks allow for racks and baggage for long hauls. From the original Pugsley to their latest offering, the Wednesday, Surly have a fat bike for every occasion. There are a couple of pedal assist fat bikes to check out. DirtEBikes have a new 2016 model at $1,990 which includes 7 speed Shimano gears and Samsung lithium ion battery. (Not pictured) The higher specified VelectriX fat bike includes Shimano Deore running gear and Shimano STEPS drive system with a 60-80 km performance range. The VelectriX retails at $3,995 and provides a seamless ride in sand, snow or mountain terrain with intelligent power assistance

If you’re looking for something serious, it’s worth considering a couple of Australian brands. Salted offer frames of carbon or alloy with front or dual suspension. You can buy a frame and build it up with your choice of components, or order a complete bike from $2,999. Muru sells titanium-framed fat bikes in either ‘overlander’ or ‘trail’ form, depending on whether you plan on covering big miles or just taking up a bit more width on your regular mountain bike trail. They offer build kits with Shimano, SRAM or Rohloff gearing, starting from $3,995. (Pictures not available)