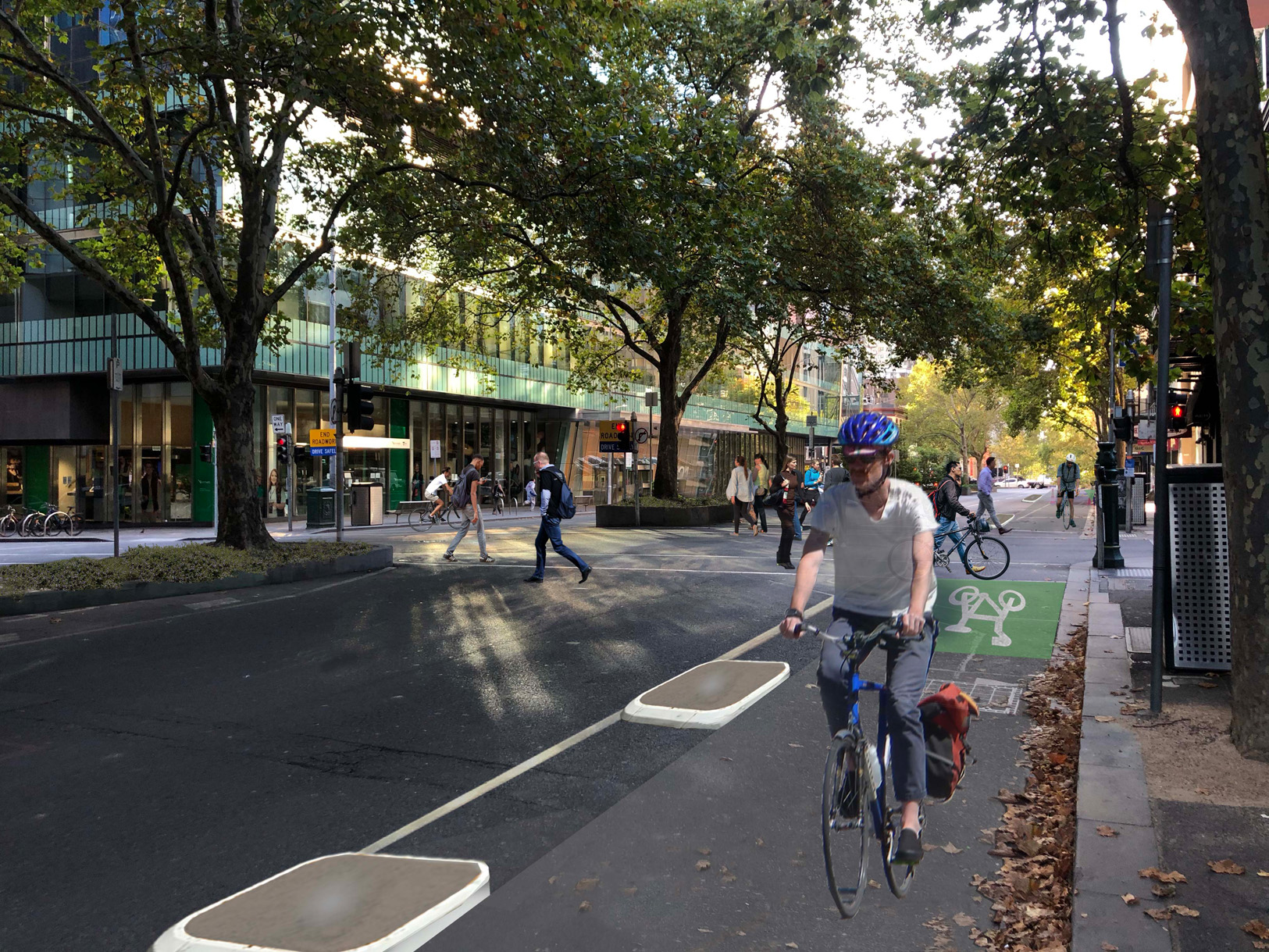 The City of Melbourne is working to fast-track the delivery of 40 kilometres of bike lanes to help people travel safely and support city businesses to recover from the COVID-19 pandemic.

Lord Mayor Sally Capp said the City of Melbourne will deliver adaptable bike lanes that can be constructed and installed more quickly to provide more space for people riding bikes.

“Riding and walking have increased in popularity during the pandemic. As people return to the city they will want to travel in ways that allow them to maintain physical distance,” the Lord Mayor said.

“I look forward to seeing lots of Melbournians enjoying our city on bikes – as I do – especially those who’ve taken up riding as a way to stay fit and healthy during the pandemic.”

“We will fast-track the delivery of 40 kilometres of bike lanes to enable more people to cycle safely into the city. These will be built in two stages, with the first 20 kilometres delivered in 2020-21, through a $16 million investment.”

“By fast-tracking the delivery of bike lanes on key routes, we’re creating streets that people can feel confident riding along, which in turn will free up space on our roads, buses, trams and trains.”

“Our research shows that it’s essential to create physical protection from motor vehicles to encourage more people to ride in the central city.”

“This will complement the work we’re already doing on bicycle routes to the south of the city such as Kavanagh Street, Alexandra Avenue, Linlithgow Avenue and Southbank Boulevard.”

The first priority routes include:

“These routes are already earmarked in our Transport Strategy 2030, which sets out a 10-year roadmap for Melbourne to become a premier cycling city with a network of protected cycling lanes and intersections, lots of bike parking and facilities for cyclists,” Cr Frances Gilley said.

“We’ve seen other leading cities around the world such as Paris, London and Milan successfully integrate cycling as a key mode of transport to reduce congestion and accommodate growth.”

“Our first project will be to install 3.5 kilometres of protected bike lanes along Rathdowne and Exhibition streets. This is one of the most important routes for cycling to the city from the north, but is currently unsafe with sections of the street having no protected bike lanes.”

“As well as creating physically separated bike lanes on Rathdowne Street, we will upgrade intersections further north along Canning Street. The works will be completed in stages over the coming months.”

“We will use plastics, rubber and recycled materials that can be installed quickly so we can accelerate bike lane delivery. The infrastructure we install will be functional for years to come and can be progressively replaced with fixed lanes over time as required.”

“The project is expected to have minimal impact on parking in the municipality, considering there are 217 000 private and public parking spaces in total. This is made up of 193 500 off-street bays and 23 500 metered and un-metered parking spaces on streets.”

The City of Melbourne is investing $41 million in transport initiatives in 2020-21, including investing $6.9 million to renew roadways along William Street, between Flinders Street and Flinders Lane, and improving footpaths on Canning and Queensberry Streets in Carlton.