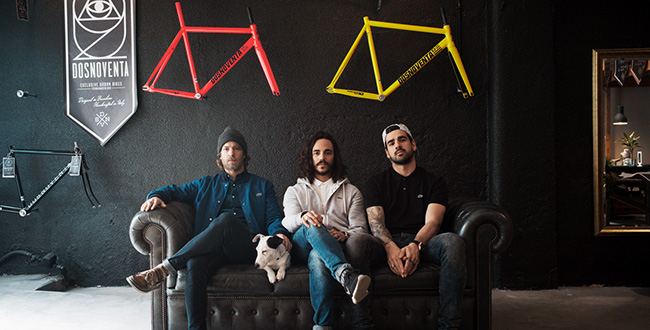 In just four years this Spanish brand has a dedicated following among urban cyclists. We find out why.

Southern Europe, think France, Spain and Italy, is famous for cycling. All three countries have historic road cycle races and each has the warm climate and mix of flat lands and rugged terrain perfect for every level.

However, it is not the Pyrenees and Alps that have seen the most new cyclists in recent years: urban cycling has taken the region’s cities by storm and this is thanks to a new breed of bicycle and frame builders. They are re-engaging urbanites with machines that not only look good but are also built to cope with riding the busy, winding streets of cities such as Milan, Nice and Madrid.

One such brand is Dosnoventa. Based in Barcelona, the company is the brainchild of Juan Pozo and Juanma Guadalajara. Formed in 2010, Dosnoventa evolved from the duo’s love of cycling and their already successful boutique fixed-wheel cycling store, C.R.E.A.M. Bikes And Things.

Joining forces with art director Dani Melo and architect/industrial designer, Uri Bordes, Pozo and Guadalajara decided to take the next step and design and build their own brand of bicycle: a fixed-wheel model that would be focussed on urban use.

“We were all riding fixed-wheel bikes and understood their limitations,” says Melo. “We decided that our bikes would be great to ride in the city. They would be designed to make it impossible to hit the front wheel with your foot – unlike many of the original fixed- wheel track bikes – and with a greater distance from ground to the bottom bracket so that we could take curves more aggressively without worrying about curbs, potholes or that pedals will collide with the ground.”

The name Dosnoventa is actually taken from the Spanish translation for the measurement from ground to bottom bracket of 290 mm – dos noventa, meaning two ninety – that the guys decided was the optimum height for their frame design. Couple this unique feature with some sharp styling, plus frames built by artisans in Italy, and Barcelona’s coolest urban bicycle brand was born.

Today, the Dosnoventa has a series of nine different frames, covering road, fixed wheel and cyclocross, each named after a city such as Tokyo, Kuala Lumpur, Helsinki, Detroit and, of course, Barcelona.

And, the company has formed a racing team, which is managed by Italian photographer and bicycle fiend, Andrea Schiliro.

“We are a young team and not typical of cycling teams,” he says. “My idea is not to get the fastest riders but to build up a nice tight crew of friends who enjoy the ride wherever we go and whatever we do.”

The team is just starting out and it has the full support of the brand. The founding partners asked Schiliro to manage because they knew that he would not only strive to bring together a good team but also a group of talented people who would represent Dosnoventa well on the international scene.

Schiliro’s friends first, winners later philosophy gels well with that of the Dosnoventa brand, which has grown exponentially since its inception, not by major advertising initiatives nor massive capital input but by word-of-mouth and a buzz of social media from new Dosnoventa owners, who are ecstatic about their bikes and their new-found Dosnoventa family.

“We totally identify with our followers and customers because a few years ago that was us: we were the people looking for something to suit our urban riding style,” says Melo. “Today, we can offer a completely personalised treatment to our clients and we don’t rest until we see them 100 percent satisfied.”

And so, while Melo and his colleagues in Barcelona cruise the city streets and chill with buddies at the cool Dosnoventa store and HQ, Team Dosnoventa will be on a whistle-stop tour of the Far East. It will be entering numerous races but, as per the brand and team’s ethic, Schiliro says: “We won’t be the pro team with a thousand sponsors plastered across our jerseys. We’ll be the ones doing our best, enjoying the ride, smiling, partying and playing with our Dosnoventa friends.”