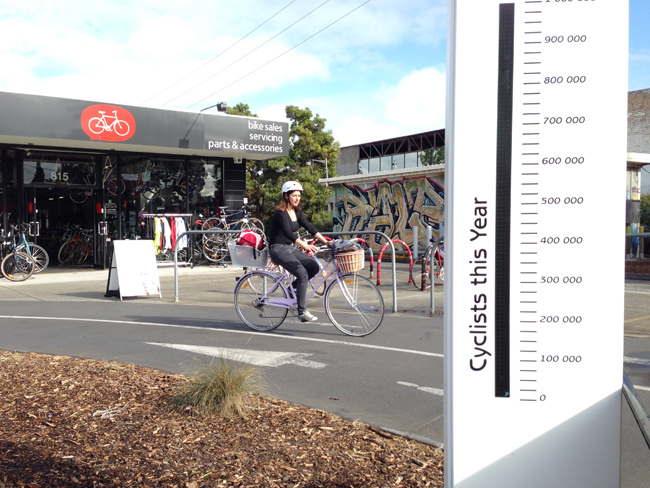 It’s Ride 2 Work Day tomorrow, just in case you hadn’t heard, and on at least one bike path in Melbourne we’ll know immediately just how many people took up the option of commuting on wheels.

Velo Cycles have teamed up with Moreland City Council to invest in a bicycle traffic counter. The counter, installed outside Velo Cycles on the Capital City Trail next to Nicholson St, provides a visual display of both daily and annual cyclist counts.

Rob McNeill, General Manager at Velo Cycles, said the inspiration for the counter came after Harry Fishman saw similar counters online, installed in American cities.  The counter, from Vekso, is designed to pick up metallic items and so can distinguish between walkers or joggers and count only cyclists. A real time count is displayed of both the number of cyclists that day (since 12am) and the total for the year.

Real time data from the counter will eventually be available from the Velo Cycles website and will be complemented with a live feed from a camera mounted on the counter. As Rob explains, while there have been counters installed on bike paths around Melbourne before, this one is unique in providing a real-time visual of the count. While the data from the counter will be used by both Velo Cycles and Moreland City Council, the counter has also been angled to be able to be seen by cars travelling along Nicholson St, educating motorists being another important aspect of the counter’s installation.

The first of its kind in the southern hemisphere, the counter will be officially launched on Ride 2 Work Day by a representative of Moreland City Council at Velo Cycle’s Ride 2 Work celebrations.